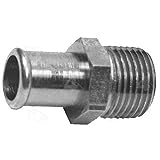 Back in 2014, Fiat Chrysler Automobiles announced that it would try to reinvigorate its then somewhat moribund Alfa Romeo brand with seven new models due to arrive by 2018. We’re now nearly halfway through 2017 and only two of those machines have arrived and it seems unlikely that target will be met. The first of the new generation of Alfas finally hit the streets in fall 2016 reviving the classic Giulia nameplate and taking direct aim at the venerable 3 series. Along with the Giulia badge, Alfa is reintroducing America to the Quadrifoglio is the highest performance variant and that’s the one that landed in my driveway for a week.

FCA has a real challenge on its hands in trying to relaunch Alfa Romeo in America. It’s a 107-year old brand that has effectively been out of this market for more than two decades. Aside from a few dozen 8Cs and a few hundred 4Cs the last “volume” model sold here was the 1995 164 sedan and calling that a volume model would be a stretch. Even in the old country, Alfa sales had dropped to about 74,000 by 2013. For American consumers, unless they were old enough to remember who Mrs. Robinson was, Alfa Romeo might as well have been an entirely new brand and launching one of those successfully is an exceedingly rare task.

Given that daunting challenge, it might seem an odd choice to have your first product aimed directly at a segment icon like the BMW 3 series. On the other hand, if you can nail it, you can  establish some real bona fides. Considering the current market realities of consumers abandoning cars for SUVs and crossovers, the choice of a sedan to lead the charge might also seem odd. Here too, FCA has also got the situation covered with the Stelvio SUV that is only months behind the Giulia. 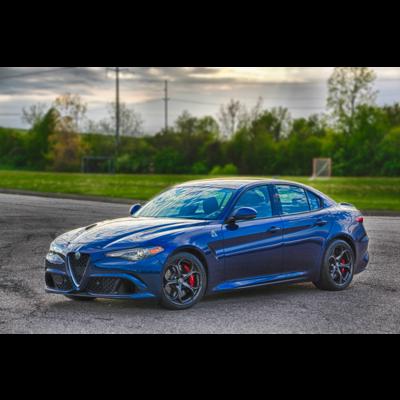 So if you’re going to bring back a venerable Italian marque to tackle the Germans, how do you set yourself apart? Apparently the same way Italians have stereotypically always been distinguished from Germans, passion vs cold, calculated efficiency. For those of us old enough to remember Alfa Romeos of yore, one glance is all you need to know that is exactly what you’re looking at and yet it’s something quite different.

The triangular shield grille is there, and the voluptuous curves say that this car is from the peninsula that hangs off the southern edge of the continent. And yet this is quite different from the last car to wear a Giulia badge in the 1970s. Those were boxy little sedans and like other Alfas of the era, they had a light almost delicate feel. This modern Quadrifoglio has contemporary proportions with the curvaceous fenders enclosing gorgeous 19-inch alloy wheels with low-profile high-performance rubber. The Monte Carlo Blue metallic paint is absolutely stunning and the white triangles containing the four-leaf clover on the front fenders tell you this is something special.

Inside the surfaces are covered in a mix of sumptuous black leather and alcantera with some of the now obligatory carbon fiber accents. The heavily bolstered front seats scream out that this is a car for driving. One other nice touch is the is the contrast stitching that has been executed in parallel green and white threads to match the quadrifoglio badge.

Long, metal racing style shift paddles mounted to the steering column sit behind the wheel. The one minor complaint I had about the cabin is that the steering wheel rim felt just a bit on the skinny side although the diameter was perfect. Interestingly the red engine start button hangs from the lower edge of the left steering wheel spoke rather than on the dashboard. You don’t have to reach around around the wheel to fire up the engine, but if you park with the wheel anywhere other than straight ahead, the position of the button could be anywhere. It just seems an odd choice.