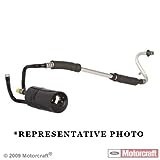 The 2018 Audi S5 is both the higher-performance variant of the A5 coupe and the more-athletic and sinister-looking sibling to the S4 sport sedan.

The differences between the S models starts with the grille, which sits lower on the S5’s fascia, just ahead of the bulging hood with its power dome, and the headlamps that are simpler in design than the S4’s “lightning bolt” eyes. From there, the rest of the coupe’s lines are more curvaceous, muscular and — to use Audi’s own parlance — more “emotional” than the cooler, more logical S4 sedan. And, if you haven’t noticed, the S5 also as two fewer doors.

However, peek beneath the sheetmetal and you’ll find a very similar car to the S4 sedan — nearly identical, in fact — with the same pulse-pounding turbocharged performance to match its low-slung good looks and the same excellent Audi Connect tech.

The new S5 makes 354 horsepower and 369 pound-feet of torque thanks to its 3.0-liter, turbocharged V6 engine. Audi has tucked its twin-scroll turbocharger right between the V6’s two cylinder banks in what’s called a “hot inside V” configuration. Of course, the Audi isn’t the first to do this, but tells us that it chose the setup because the shorter exhaust paths help improve the turbo’s responsiveness to throttle inputs. And responsive it is, making its peak torque at a very low 1,370 RPM.

The new engine is also 31 pounds lighter than the previous S5’s supercharged engine.

That 3.0T V6 is mated to an eight-speed torque-converter automatic transmission. Paddle shifters are standard, but I’m a bit disappointed by the hollow plastic feel of the paddle, especially considering the S5’s price. I’m even more disappointed that the S5 no longer offers a manual gearbox in any configuration. Audi says that the vast majority of buyers who actually shell out for S5s opt for the auto-boxes, so… I guess this is your fault.

I’m not at all disappointed by the performance. In a straight line, the coupe launches with a surge of power, even without activating the hidden launch control mode. The S5 boasts a 0-60 mph time of just in 4.4 seconds, which Audi claims is faster than the Mercedes-Benz C 43 and the BMW 440i. The S5’s engine and gearbox have amazing synergy. The shifts are smooth — almost imperceptible in the most comfortable settings — and the combo always seems to be in just the right gear, thanks in part to the generous and flat torque curve.

You know what they say about power without control — the former means nothing without the latter — so Audi has put a solid effort into making sure that the rest of the S5 has the traction, handling and stopping power to make best use of its 354-horsepower engine.

After leaving the gearbox, torque is split between all four wheels via the standard quattro all-wheel drive system. Quattro, for the S models like the S5, is more performance oriented with a sportier, rear-biased 40/60 default split. The center differential can alter that front-to-rear torque split dynamically depending on the moment’s needs and an optional sport rear differential adds even more flexibility by enabling torque vectoring across the rear axle for better traction and control when cornering.

Helping to keep the wheels planted is a 5-link multilink suspension at all four corners. Available active dampers continuously adjust in response to road conditions, drive select mode and cornering demands to balance a firm, responsive ride with the ability to soak up bumps.

The S5 features four Drive Select modes — Eco, Comfort, Dynamic and Individual — that adjust the characteristics of the handling, throttle response and overall performance. The S5 even has a button right on the steering wheel that can be remapped to toggle between the Drive Select modes without taking a hand from the wheel, which is great for when you stumble upon a sweet stretch of road and need to quickly hop into the Dynamic setting for a few curves. (However, on examples that have the optional “cold weather” package installed, that remappable button is replaced with a toggle for the steering wheel heater.)

The S5 wheelbase is just shy of 3 inches shorter than the S4’s, so the coupe should feel a bit more dynamic than the sedan. However, I could swear that the opposite was true once I got both cars on the road. The differences are small enough, though, that I could just be imagining things. Still, the S5’s handling exhibited the same very neutral feel right up to the limit that I felt in the S4. The understeer that all-wheel-drive performance cars tend to exhibit when pushed was almost completely absent from the S5’s quattro setup. But the coupe was also nigh impossible to get to oversteer, even with its rear-biased power split and sport differential. Steering was predictable and direct when zealously chucking the S5 into a corner on public roads. It just goes where you point it without drama.

Even giving the throttle an exploratory squeeze midcorner didn’t upset the S5. Rather than understeering out or oversteering into the corner, the coupe just plants and goes faster. There’s definitely limit to how hamfisted you can be with the grip before understeer steps in, but I think reaching that limit would tough outside of a racetrack.

I just wish the S5 sounded better. In the loudest Dynamic mode, the S5’s exhaust note is still extremely subdued from the cabin. The Mercedes-Benz E400 Coupe, for example, had much more bark and burble and a much nicer sound. Compared even to the S4, both I and my co-driver noted that the coupe sounded quieter than the sedan and that both tended to have a slightly more pronounced note from the driver’s seat. This probably has something to do with the way Audi ports the engine sound into the cabin, which otherwise is very isolated from wind and road noise.

Dashboard tech on the new Audi S5 is nearly identical to that of the A4, which means it’s quite good — the best in the business, if you ask me, with its Nvidia powered hardware and smartly designed Audi Connect software and Virtual Cockpit.

This S model has at least one unique tech trick: a new Sport view for the Virtual Cockpit instrument cluster that enlarges the tachometer, placing the digital gauge at the center of the display. In this mode, the driver can still view the Google Earth map and other infotainment functions in positions, flanking the prominent tach. Of course, the standard Virtual Cockpit display modes are also still available and just a tap of a steering wheel button away.

The S5 starts at the Premium Plus trim level, so it’s fairly well-equipped out of the gate. However, Audi has made some interesting amenity choices for this performance models. For example, massage seats are a standard feature. Making heavy, active seats a standard feature on a high-performance sport coupe — where every pound of extra weight makes a difference — seems like an odd choice by Audi. Of course, I’m not going to complain too hard about having my backside caressed and the seats’ adjustable bolsters and Alcantara inserts are quite grippy.

The 2018 Audi S5 starts at $54,600 for the Premium Plus entry point or $59,000 for the better equipped Prestige model before a $975 destination charge and any option boxes you happen to check. That’s basically a $3,700 premium over the identically performing and equipped S4 just to get two fewer doors and a less functional backseat. If, like me, you prefer the geometric look of the sedan, this makes the S4 slightly more appealing than the low-slung coupe.

I should also point out that there are two other members of the S5 family. There’s the S5 Cabriolet with its retractable fabric top, a bit of extra weight and higher starting price of $62,300, as well as the upcoming S5 Sportback with its four-door coupe profile and eponymous liftback hatch. I can’t wait to get behind the wheel of the latter later this year.

In the meantime, the sporty Audi coupe will go toe-to-toe with the likes of the BMW 440i and Mercedes-AMG’s C 43coupes when it hits the road this month.

Editors’ note:Roadshow accepts multi-day vehicle loans from manufacturers in order to provide scored editorial reviews. All scored vehicle reviews are completed on our turf and on our terms. However, for this feature, travel costs were covered by the manufacturer. This is common in the auto industry, as it’s far more economical to ship journalists to cars than to ship cars to journalists. The judgements and opinions of Roadshow’s editorial team are our own and we do not accept paid content.