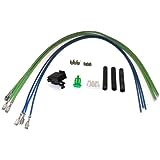 2019 Audi A7 stays true to its swoopy hatchback form – CNET

The Audi A7 is one of the original vehicles that brought what I call the “swoopy-coupe” form to sedans. Sure, you could get an A6 instead, but you lose the hatchback practicality and the form that comes with it. It isn’t for everybody, and this time around, its style is still a bit polarizing, but it’s just as interesting as before, if not more so.

From the front, things are a little different. The headlights have changed and immediately bring the recently introduced 2019 A8 sedan to mind. The hood’s appearance is stronger, and there are more creases just about everywhere.

Out back, the design adopts a seemingly single-piece taillight — again, drawing some inspiration from the new A8. The tapered hatchback is still there, and it flows into the rear end just as well as it did before. The rear end also contains an integrated spoiler that extends automatically at speeds above 75 mph. The taillights play little animations when the doors are unlocked, which is fun.

The interior is, somehow, even more futuristic than the exterior. There’s a lot of A8 in here, too, especially in the center console and the two-screen layout on the center stack. The top screen deals primarily with your standard infotainment functions — navigation, audio and the like. The lower half focuses on climate control. If two screens aren’t enough for you, you can replace the gauge cluster with yet another one. If that still isn’t enough, there’s an optional head-up display, too.

The A7’s tech goes beyond flashy screens. Seven different drivers can create individual user profiles so you’re not stuck dealing with someone else’s radio presets and navigation destinations. The car can also park itself without the driver in the vehicle. By holding down the Audi AI button in Audi’s smartphone app, the driver can watch the vehicle park itself in a space or a garage autonomously. That feature is slated to arrive in Europe in 2018, and it’ll likely come Stateside as soon as Audi gets federal approval.

Your usual bevy of driver-assist systems are scattered across three different packages. The Audi AI parking package covers the aforementioned semi-autonomous stuff, while the other two contain straightforward systems like adaptive cruise control and automatic emergency braking. The Tour Assist package will offer tips for more efficient driving and use the steering wheel to help keep the vehicle in its lane.

The Audi A7’s standard engine at launch is a 3.0-liter V6, putting out 340 horsepower and 369 pound-feet of torque, mated to a seven-speed automatic and all-wheel drive. That’s enough to get the 2019 A7 to 62 mph in 5.3 seconds. Audi says other four- and six-cylinder engines of both gas and diesel varieties will follow. It’s also safe to assume that performance-oriented S7 and RS7 models will arrive after that.

Like the A8 before it, all A7 models will come with a 48-volt mild hybrid system that stores excess energy captured from braking in a lithium-ion battery. The engine can uncouple from the transmission at highway speeds, coasting with the engine off until acceleration is required. The car’s stop-start functionality extends all the way to 14 mph, too, for a dash of extra efficiency.

The A7 isn’t just aiming to sip fuel, either — you should still be able to drive the pants off it. The further you turn the steering wheel, the heavier the steering feel becomes. There are four different suspension setups on offer — steel springs, a lowered sport suspension, electronically adjustable dampers and a self-leveling air suspension. Four-wheel steering is available, too, reducing the turning circle by 3.6 feet.

The 2019 Audi A7 will go on sale in Germany in February, with other markets to follow. In its home market, it’ll be priced from €67,800, which converts to just under $80,000 US. However, with European taxes and market prices being what they are, it’s fair to assume that when the new generation comes to America, it’ll land closer to the base price of the outgoing 2018 model, which starts at $69,700 before delivery.