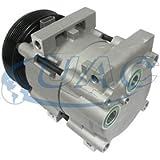 $32.99
Home › Blog › Auto › A new device could help bikers catch cars that drive too close to them – Washington Post A cyclist is seen during morning rush hour in D.C. Law enforcement in Canada is trying to enforce the legal distance between bikers and cars on the road with new technology.

Drivers who ride a little too close to cyclists on the road could soon be caught red-handed. A new technology adopted by law enforcement in Ottawa could help enforce legal distance between bikers and cars on the road.

The device, which is mounted on a bicycle’s handlebars like a bike bell, uses sonar technology to measure the distance between the bike and passing cars. The device will beep if the car is within one meter of the bike, the legal limit in the city of Ottawa, allowing the police rider to radio ahead to his colleagues so that the driver can be pulled over. “The safety of all road users is paramount and that includes cyclists. These cycling changes are directed at encouraging cycling, promoting road safety, and sharing the road,” said Rob Wilkinson, coordinator of the Safer Roads Ottawa Program.

[A cheer squad on your commute? Only with ‘Tour de Bike Lane’]

The program officially launched last week with a single sonar device. One police officer rode the bike bearing the device around the city on Tuesday to demonstrate the technology’s effectiveness. Within a few minutes of riding, the device was beeping, registering that two drivers had violated the one-meter distance requirement. The drivers were pulled over and given pamphlets informing them that they had broken the safe distance law.

Wilkinson noted that the device is not currently being used to issue fines, which can go to up to $110, and that there are no plans to use it for enforcement in the future. At this point, its main use is to spread awareness about the safe distance law, which was passed last September in an effort to encourage rider safety and reduce fatal crashes. “In order to educate people on the new law and how they can be compliant, the device will be used to do educational blitzes across the city during the summer months,” he said.

Ottawa is not alone in legally requiring drivers to maintain a safe distance from cyclists. In the United States, 29 states and the District of Columbia have passed safe distance laws, most requiring that at least three feet remain between the vehicles. But Ken McLeod of the Bike League, a nationwide cyclist advocacy group, says that the law is difficult to enforce, which discourages legislators from passing similar laws in states where safe distance is not yet on the books. “This technology directly addressed enforceability and shows that there is an educational value to the law aside from its enforcement,” he said.

Safe distance laws are an important safety measure to prevent crashes, according to McLeod. Statistics show that 40 percent of fatal crashes are rear-end crashes caused by cars speeding up to overtake a cyclist without maintaining a safe distance from the bike. Cyclists are also limited in their ability to dodge potholes or opening car doors when a car is driving too close to them.

The technology could soon see application in other cities. A similar technology is currently being used by law enforcement in the city of Chattanooga, Tenn., with police departments in Kentucky and Texas planning on implementing the tool.