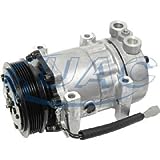 WSJ’s Dan Neil joins Lunch Break with Tanya Rivero to discuss the seductive charm of the Alfa Romeo 4C, which is available for less than $70,000. Photo: Alfa Romeo

ABOUT 50 MILES northeast of Turin, barely above flooded lowlands planted with rice, is Fiat’s high-security proving grounds at Balocco. This place is a well-kept secret—I had never heard of it—and it is one of the world’s great asphalt playgrounds.

Most test facilities look like minimum-security prisons. Balocco’s reception area includes a postcard-quality farm square surrounded by tile-roofed stables and restored 19th-century living quarters (the Italians always have room in their ledgers for la dolce vita). When the shadows grow long and the Alps turn red, drivers and engineers can debrief under the arcades, have a smoke and a glass of wine. This will do nicely, thank you. 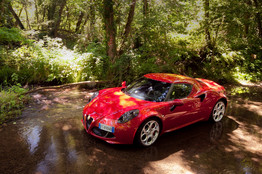 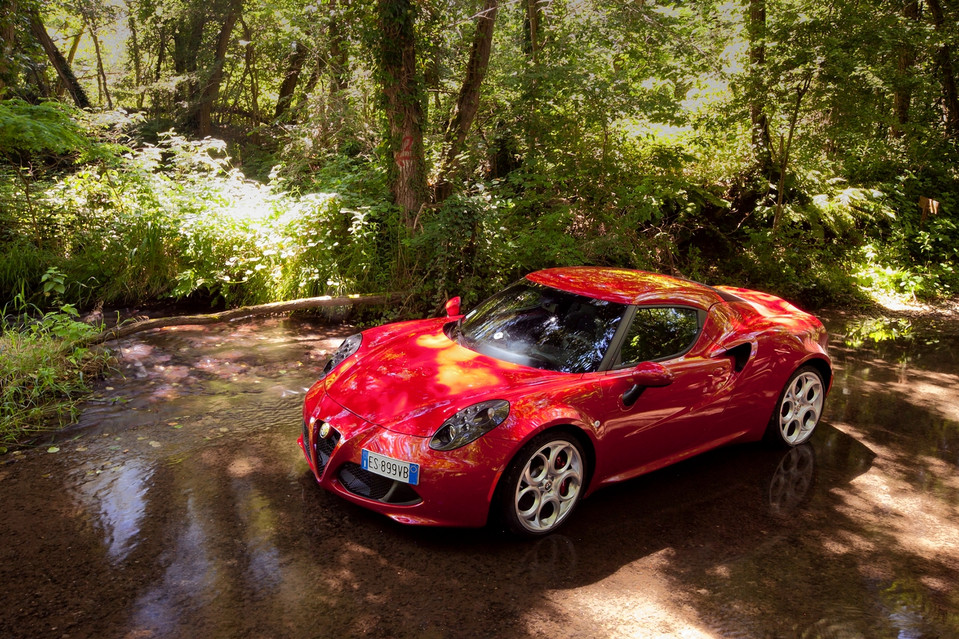 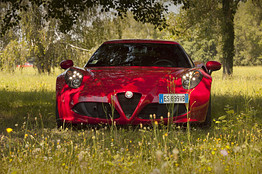 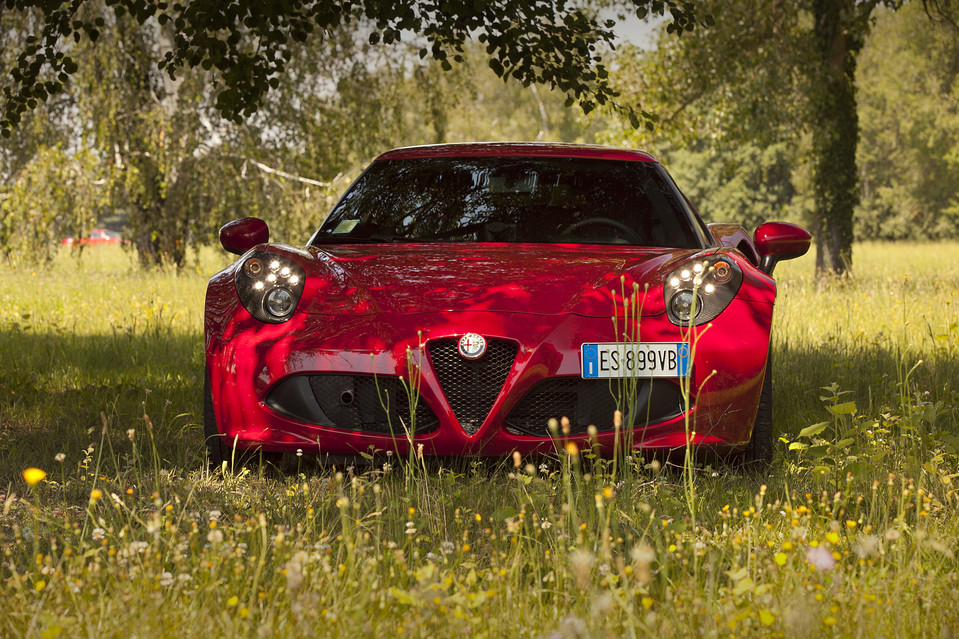 But my appointment was with the Alfa Romeo 4C Launch Edition ($70,000), a bewitching bit of track-day excess that is spearheading Alfa Romeo’s return to North America this summer after two decades.

Though with only 500 cars being shipped, literally on the boat as you read this, it’s a mighty small spear.

Alfa Romeo? I know, I know. It’s hard to trust again. But imagine, just hypothetically, a midengine, carbon-chassis Italian exotic in your driveway, 445 pounds lighter than a Porsche Cayman S, with turbo boost out the wazoo, with huge, taste-the-bile Brembo brakes, and styling known to cause spontaneous nudity. For between $55,000 and $70,000. Can I tempt you to hear more?

Let’s do the walk-around. What you are looking at is a two-seat coupe (an open-top 4C Spider has already broken cover) with a transverse-midmounted, turbocharged 1,742cc direct-injection four-cylinder engine, paired with six-speed twin dry-clutch transmission; nonassisted rack-and-pinion steering; an open rear differential, and a U.S.-spec curb weight of 2,465 pounds.

The 4C’s ultralight specs are largely thanks to its segment-exclusive carbon-fiber monocoque, which is made at horrific expense, I’m sure, by a supplier in Airola, Italy. This central structure weighs a mere 235 pounds.

With its specialized carbon architecture, the 4C isn’t much different that your run-of-the-mill McLaren: The front suspension wishbones attach directly to the carbon tub, while the Alfa’s rear struts connect to the aluminum subframe.

The 4C’s mechanical anorexia (about 500 pounds lighter than the barely-there LaFerrari) is primarily responsible for the car’s quick-twitch reflexes and will-it-so immediacy. The thing’s a bumblebee, short-geared, torquey, hilarious. To drive the 4C is to be reminded how heavy and numb most so-called sports cars have become.

“
The Alfa Romeo 4C looks like it drinks unicorn blood
”

There were, however, no grams to be spared for the 4C’s aural refinement. Actually, the 4C engineers ran in the other direction. For the track-pack cars, Alfa even deleted the car’s muffler, or silencer. These cars have a nearly straight-pipe exhaust from the catalyst back and when you pull that upshift paddle at full throttle, the little car interrupts its bellowing to emit a startling, metallic rattle like a gassy Tin Man. FRA-RAPPP, BRA-RAPP!

All around Balocco’s dynamics circuit the 4C raised a righteous hullabaloo, with short flinty strokes of the paddle-shift gearbox peeling revs and the turbocharger sucking and the wastegates huffing and puffing like the car was 10 centimeters dilated. You want driver involvement? The 4C smooshes it in your face like Jimmy Cagney’s morning grapefruit. 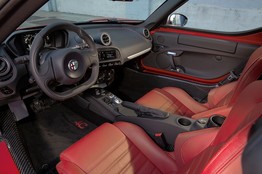 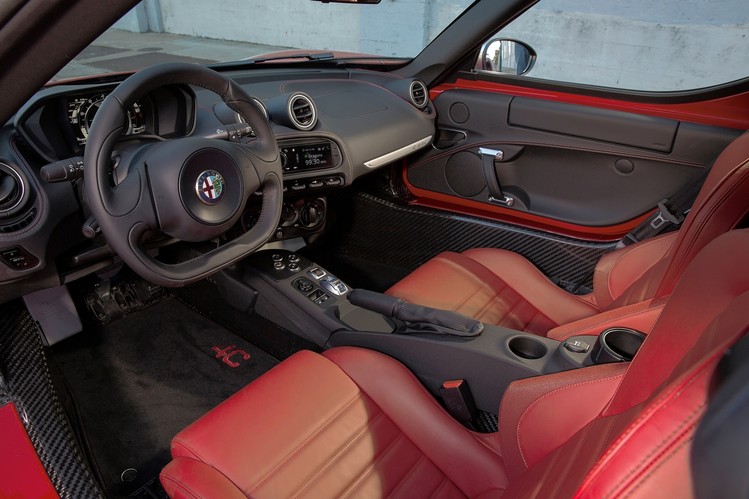 It’s kind of nice looking too. The production 4C’s cosmetics vary little from the developmental concepts seen since the 2011 Geneva motor show, retaining the show cars’ sculptural drama, mastery of volume and light, and the bandy proportions. Deep tension gathers from the hawk-billed nose through character lines and to the 4C’s broad rear haunches. The jet-fighter canopy, wasp-tailed rear glass engine cover, the taut bum with kicked up integrated spoiler. It’s a bambino Ferrari.

The initial brace of 4Cs will come in the Launch Edition trim, with phenomenal-looking wheels (18 inches in the front and 19 inches in the back) to go with the hard-core suspension calibrations (double-wishbone front and rear struts with rear aluminum subframe) and carbon-fiber cosmetics. Especially on the big rims, the Alfa’s stance is beyond lurid: 46.6 inches tall and 73.5 inches wide, as compared with a Porsche Cayman S (51/70.9).

The risk in a small, high-style car is a kind of emasculation, a vague cuteness. The 4C looks like it drinks unicorn blood.

In temper and execution, and its ratty awesomeness and glider-cockpit minimalism, the 4C feels like an Italian version of the Lotus Elise. The rare modern car with no power-assist steering, the 4C’s steering touch is wonderfully vivid and alert, nicely snappish off center and then, as you bend toward the corner apex and the loads increase, the steering effort gets heavy and you might have to saw the wheel a bit to stay on top of your cornering drift. Oh, I remember, driving.

Jump off the brakes with a lot of steering angle to induce more yaw and the 4C’s rear end will flicker, but it won’t fully step out. Go in hot on the brakes and the 4C will dance around but the handling feel is never less than innate and fully confident. Whatever mild understeer is dialed into the 4C initial setup will likely be dialed out with the high-performance versions to come. 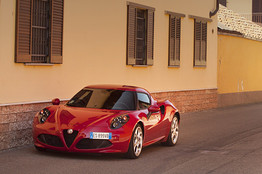 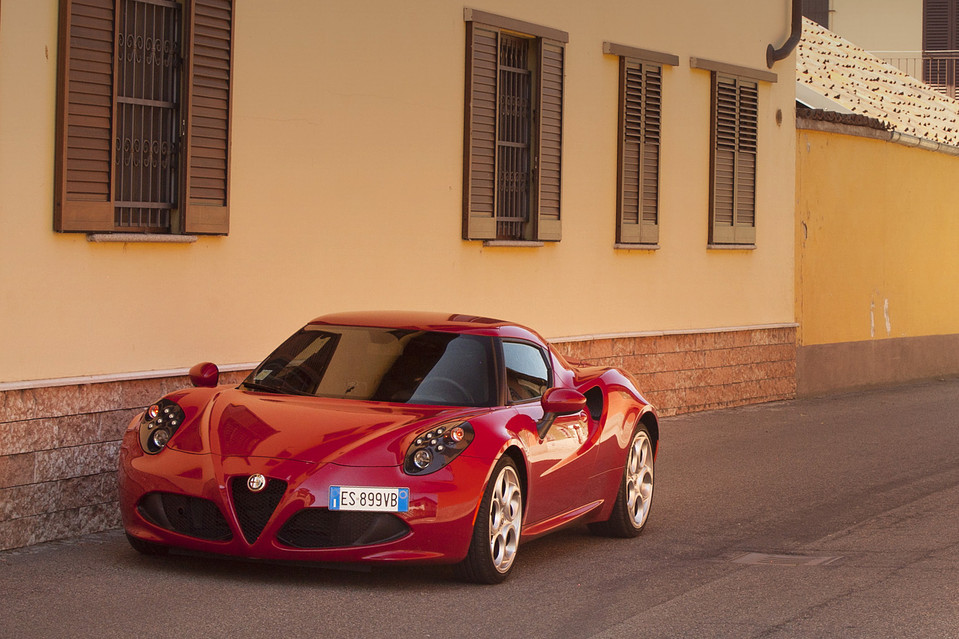 Is the Alfa 4C perfect? Not yet. The engine management software chokes off the revs in midsong at around 6,500 rpm. It’s clear the turbo engine is under-taxed with the current parameters and that Alfa is leaving itself some room to tune later. A little more corner-exiting pull would be nice.

What relevance any of this has to do with the return of Alfa Romeo to the U.S., I’m still not clear. Alfa Romeo recently announced a five-year megaplan that targets global sales of 400,000 by 2018, with eight new vehicles and more than five times 2013 volume. The big picture calls for an expeditious transition to rear-drive or all-wheel-drive architectures and 50-50 weight distribution. Alfa wants to be the Italian Audi.

What happens when Turin’s supply of nitrous oxide and antidepressants runs out, no one knows.

Meanwhile, the 4C—handmade in a wildly laborious process that requires technicians to assemble, then disassemble, then reassemble the car for a final fit—isn’t exactly a bell-wether of future Alfa mass production.

In so many ways, this thing is a complete outlier, an engineering stunt, just bonkers.

Get it while you can.