New York (CNN) — A black man dies after a confrontation with a white policeman. Crowds take to the streets incensed, decrying police brutality, and a grand jury is called to hear the case.

The place is not Ferguson, and the case is not Michael Brown’s. It’s Staten Island, New York, where, on Wednesday, a grand jury is expected to vote on whether to indict white Officer Daniel Pantaleo, who put African-American Eric Garner in a chokehold.

People participate in a demonstration against the death of Eric Garner after he was taken into police custody in Staten Island. Joel Graham photographed the demonstration, and captured this image of Garner’s friends and family rallying alongside the Rev. Al Sharpton. 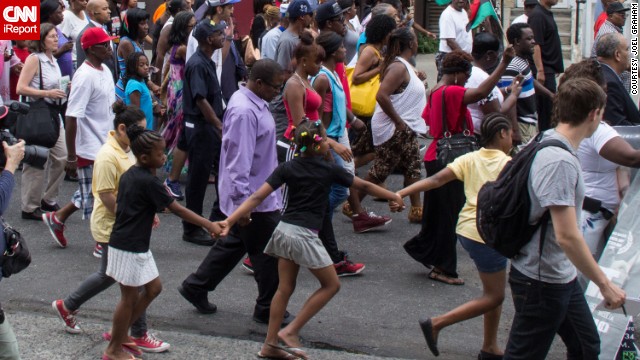 Crowds of people rally in Upper Manhattan on Saturday. 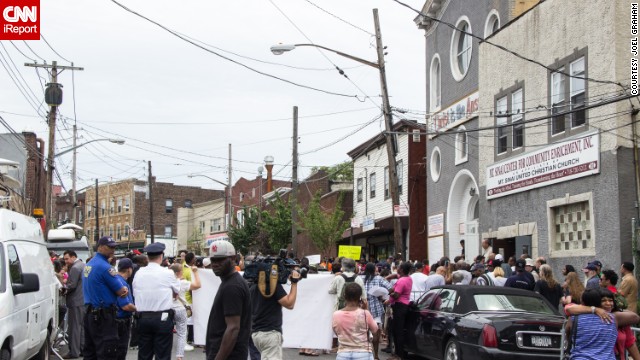 While photographing the demonstration, Graham says, he saw a New York Police Department presence at the event. “The NYPD appeared genuinely sympathetic to the marchers, giving everyone wide latitude to voice their frustrations,” he said. 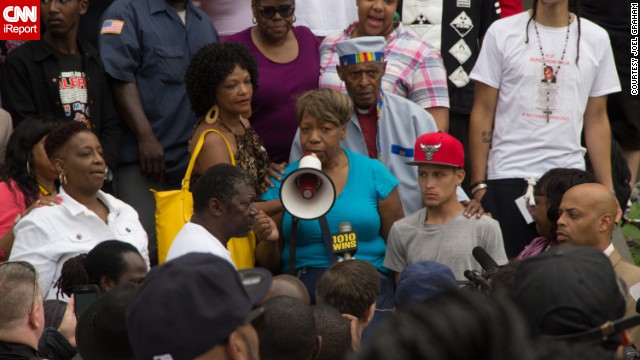 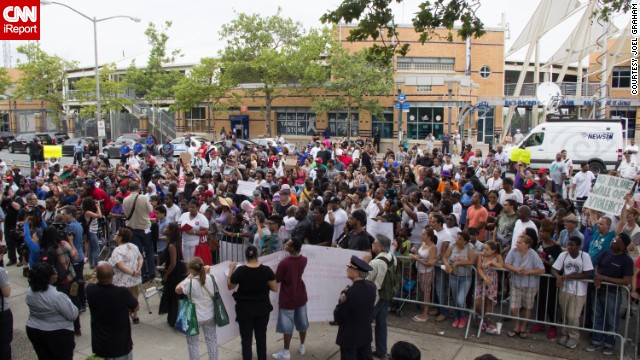 Garner’s family, friends and people from the Staten Island community gathered to demand a full investigation into the incident.

“I can’t breath! I can’t breath,” Garner cried out after he went down on July 17. Seconds later, the 350-pound man, who suffered from asthma, lay motionless and unresponsive on the sidewalk. An ambulance carried him away on a stretcher.

He was pronounced dead that day at age 43.

Police had suspected him of illegal vending. He had been arrested on the same suspicion two months prior and had a lengthy criminal record, including 30 arrests.

Ironic parallels mark the deaths of both black men, starting with crimes they were suspected of — Brown allegedly stole cigars from a convenience store; Garner was allegedly selling cigarettes tax-free.

Another similarity that has become the hallmark of protests in Ferguson: Garner put his hands up in the air, as the crook of Pantaleo’s elbow tightened around his throat.

Some eyewitnesses have said that Brown made that gesture in surrender. But other witnesses contradicted them.

No video was rolling, so doubts over that and other details will always hang over the moment that former Ferguson police officer Darren Wilson shot the unarmed teen.

That has led President Obama to call for law officers all over the country to record their operations with body cameras.

In Garner’s case, there can be little doubt about what happened.

Before he gasped what appeared to be his final breaths, someone hit record on a cell phone camera. The details of his takedown spread through the Internet as the video went viral.

Wilson argued before the Missouri grand jury that he shot Brown — who he alleged tried to wrest away his gun then charged at him — in self-defense.

In the Staten Island cell phone video, Garner did not go after Pantaleo but had his back to him; the officer jumped him from behind then tackled him to the ground.

The New York City medical examiner has ruled Garner’s death a homicide. The cause of death was “compression of neck (choke hold), compression of chest and prone positioning during physical restraint by police.”

In Ferguson, Wilson went into hiding over death threats and kept his status of police officer but was placed on leave. He resigned shortly after the grand jury decision.

After the chokehold, Pantaleo was put on modified assignment and stripped of his badge and gun amid the investigation, and the NYPD’s commissioner ordered an extensive review of training procedures.

An attorney for Pantaleo said his client testified for approximately two hours on November 21 in front of the grand jury.

“He was anxious and anxiety-filled prior to that,” said Stuart London. “He is cautiously optimistic and knows that his fate is in their hands now.”

Two lawsuits have previously been filed against Pantaleo. The plaintiffs in both suits allege false arrest, unlawful imprisonment, civil rights violations and other charges.

In both Ferguson and New York City, mostly African-American protesters took to the streets for weeks after both men died to decry police violence.

Demonstrators in New York have called the police response during Garner’s arrest excessive and criminal, but during protests, the contact between police and demonstrators has been largely cordial.

“The NYPD appeared genuinely sympathetic to the marchers, giving everyone wide latitude to voice their frustrations,” said photographer Joel Graham, who took pictures of a demonstration Upper Manhattan.

He found the demonstrators to be equally peaceful.

“This crowd was composed of good, well-meaning people who understood that peace was the only option and were adamant that things remain calm over Eric’s death,” he said.

Missing were the tear gas canisters, assault rifles, armored vehicles and the lootings and flying bottles that marred the St. Louis suburb in the wake of Brown’s death.

When the Missouri grand jury declined to charge Wilson, violence returned to Ferguson, as cars were set on fire.

On Staten Island, although it’s not certain, the announcement of the grand jury decision is expected before the end of the week.

On Monday, officials there met with New York City Police Commissioner William Bratton to discuss the impending decision and the borough’s preparedness for reaction to it.