BILLERICA — The weekly Lynnway Auto Auction was unfolding as usual Wednesday morning, with hundreds of car dealers and bargain hunters browsing from lane to lane.

On the floor, Leezandra Aponte was on her first day on the job, a position she had taken to help pay for her daughter Valeria’s quinceañera, a 15th birthday celebration.

As a line of cars crept through the warehouse, a 2006 Jeep Grand Cherokee accelerated without warning around 10:15 a.m., striking a dozen bystanders as it careered across the entire length of the building and crashed through an exterior cinderblock wall.

Three people, including Aponte, a mother of three who lived in Lowell, were killed, and nine were injured in the horrific crash, which touched off a panicked, chaotic scene.

“There was blood everywhere. Everyone was screaming,” said Anthony Alba, who had come to the auction to buy a car. “We were all confused about what had happened.” 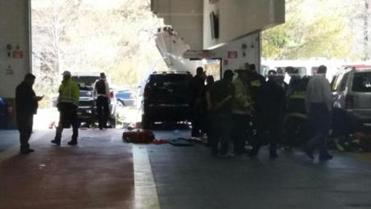 Photos from the scene of the fatal Billerica crash

An SUV apparently careened through the large facility, injuring multiple people and killing at least two.

As victims lay near the smoking Jeep, one auctioneer tried to resuscitate a victim, saying she used to be a doctor, Alba said. But there was nothing she could do.

Witnesses said the driver, an auto auction company employee in his 70s, was conscious after the crash, and law enforcement officials said he was not taken to the hospital. Only employees are allowed to drive vehicles during auctions, officials said.

At a news conference, Middlesex District Attorney Marian Ryan said the cause of the crash was not clear, but that it appeared to be an unintentional “tragic accident.” Authorities did not say how quickly the SUV was traveling, and Ryan said she expected an investigation into the crash to be “fairly lengthy.”

In a statement, Jim Lamb, president of Lynnway Auto Auction, said the company was heartbroken about the fatal crash.

“On behalf of my entire company, I want to express our shock and sadness at the devastating accident that took place earlier today,” he said. “We are heartbroken that this accident occurred at our premises with a vehicle driven by one of our drivers. Understandably, the driver is very distraught; he will not be driving cars at the auction until the investigation has concluded.”

The crash happened in a large building on a 58-acre property in an industrial section of Billerica.

Every week, hundreds of car buyers — some local dealers, some individuals looking for a bargain — come to the auction. The cars for sale travel through the warehouse down marked lanes at a slow rate of speed, usually just a few paces apart.

On this day, the Jeep abruptly accelerated and went out of control.

“As the vehicle began to enter, it suddenly accelerated, traveling through the inside of the building at a very high rate of speed,’’ Ryan said.

Authorities did not identify the three people killed. Aponte was identified as one of the victims by her relatives.

“Her first day on the job and this is what happens,” said Orlando Aponte, her brother.

Aponte, who was in her 30s, had three children, her brother said. She lived in Lowell and was originally from Puerto Rico.

She was a great mother, Orlando Aponte said through tears. Her son had just graduated from high school and was joining the military. Her daughters were in high school. She had just gotten back from vacation with her girls, and Tuesday she had visited her mother.

“She was awesome at decorating,” he recalled. “She loved to dance. She was a happy person.”

Jeep Grand Cherokees have been named in media reports as susceptible to sudden accelerations, but authorities said it was too early to tell whether problems with the vehicle played a role in the crash.

In 2015, Jeep’s parent company denied to the Philadelphia Inquirer that the vehicle had a sudden acceleration problem, saying such claims had been refuted by safety advocates.

Lynnway Auto Auction, which bills itself as the largest vehicle auction in New England, has been previously cited by safety regulators. In 2014, OSHA cited the company for “serious” violations of workplace safety rules after an inspection found it “failed to require the use of traffic control devices while employees performed maintenance tasks among moving vehicles.”

The company was initially fined $6,300 and agreed to make changes the regulator recommended, and the file was closed, OSHA records show. The fine was later reduced to $2,200.

Asked about the company’s record, Billerica Fire Chief Thomas Conway said it was up to date on safety standards, calling it a “first-class operation.”

Lamb, the auction’s president, said the company is cooperating with investigators to determine “how and why this happened.”

In the hours after the crash, customers and employees emerged from the scene in a daze, still trying to process what had happened.

“It was horrible, horrible,” said Geraldo Delima, 46, of Somerville. “I saw everything.”

Fredrick Kyazze and his friend Jerome Jjooga had been in the lane next to the SUV when they heard a loud bang.

Kyazze remembered thinking a building had fallen down, but when they turned around, the black Jeep had crashed through the cinderblock wall. Four people were lying on the ground, apparently hit by the Jeep. One man’s leg had been run over, Kyazze said.

The crash was strikingly similar to a 2015 incident at an auto auction in Framingham. There, a luxury SUV abruptly accelerated across a warehouse floor and into a crowd of people before smashing through a cinderblock wall. Eight people were injured.

The company, Adesa, was not cited in that crash, records show.

Samuel Lallemand, who owns Somerville car dealer CM Auto Sales, said his business partner was at the auction Wednesday and posted a video of the aftermath online. It recalled memories of the Framingham crash, he said, in which a friend was injured.

He said Adesa had put up barriers at its auction house in Framingham after the crash but wasn’t sure whether the layout at Lynnway would allow for that.

“She was the light of the room,” said Leonardo Aponte, an uncle who lives in Florida. “She was a very, very happy person. We all loved her very much.”

Aponte grew up in Florida with her uncle before moving to Massachusetts. She had visited him for Easter, he recalled, his voice cracking.

Aponte lived near her mother, Orlando Aponte said, and they were together constantly, often showing off freshly painted manicures they had just gotten.