Behind the scenes of Bentley the dog’s Ebola quarantine – WFAA

GRAND PRAIRIE — Behind a barricade at an old military base in Grand Prairie, an armed guard stands beside the dog house where the beloved pooch of nurse Nina Pham is under quarantine.

“He’s a great dog and he’s handled it like a pro,” says Dr. Cate McManus of Bentley. “I do expect to see him on talk shows and maybe a movie after this.”

McManus is the Dallas Animal Services veterinarian supervising Bentley’s care with the help of Texas A&M.

The 1-year-old Cavalier King Charles spaniel is being closely monitored for signs of Ebola over a 21-day period. He was in the apartment with Texas Health Presbyterian nurse Nina Pham when she started showing symptoms of the virus. No one knows if the dog was directly exposed, but authorities aren’t taking chances. 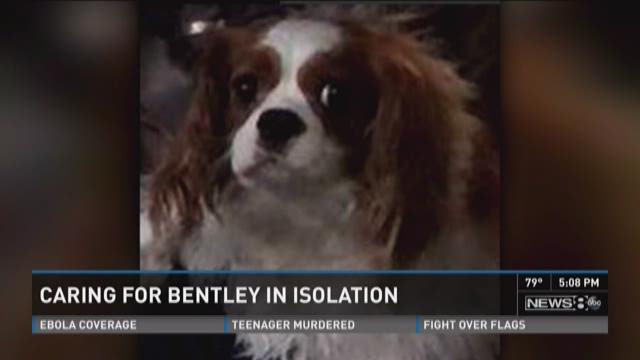 If Bentley the dog could talk, he might say that Ebola quarantine hasn’t been all that bad.

Video shot through the window of the facility where Bentley’s being cared for shows how much he enjoys the thrice daily play times with vets in their yellow hazmat suits.

McManus says from the beginning, Bentley has shown only friendliness towards his caretakers, even when they’re drawing his blood.

“We put the radio on for him during the day,” McManus said. “And then he enjoys his out time and plays a little fetch, does his business and then even goes back in his crate back on his own.”

It’s his “business” that vets are testing for signs of the virus. So far, tests on urine, feces and blood have come back negative.

But, health experts admit Bentley is a bit of an experiment. Excalibur, the pet of a Spanish nurse who also contracted the disease, was quickly euthanized because of what science doesn’t know about Ebola and dogs.

“I do think that if dogs were such a risk in the transmission process, then things would be going a lot differently in Africa,” McManus said.

In Africa, dogs wander the streets and have been known to come into contact with the infectious corpses of Ebola victims.

“Hopefully, we learn from this experience with Bentley,” McManus said, “So going forward, if we do have any other situations we’ll be more prepared or better able to assess them and take care of the dogs.”

McManus says she’s optimistic that Bentley will be reunited with Pham. His last test will be sent of November 1. Results could take several days.

A fund to pay for the considerable cost of Bentley’s care has been established. To donate, visit DallasAnimals.org.

Bentley will remain under quarantine until at least November 1.