BMW has confirmed that its 2018 GTE contender will be based on the new M8 model, as the German manufacturer ramps up for a dual championship factory GT program next year.

A fully camouflaged, early prototype of the production car (pictured above) was unveiled during a driving event at the Nürburgring on Saturday, ahead of this afternoon’s 24-hour race.

It comes just days after images of the new 8-series concept were released ahead of its formal launch.

“Developing a new racing car is always exciting, and in the case of the BMW M8 GTE the anticipation is that much greater still.

“We can’t reveal any pictures yet, but I can promise you that the BMW M8 GTE will look spectacular.”

Specifications for the production or race car have not yet been released but it’s believed to feature either a twin-turbocharged V8 or V12 engine, the latter, however, would not likely be suitable to the GTE regulations.

Marquardt said they are planning an initial roll out “for the first half of this year” with intentions to give the M8 GTE its competition debut in January’s Rolex 24 at Daytona.

Former BMW DTM squad MTEK will run two cars in the GTE-Pro class of the FIA World Endurance Championship, including at the 24 Hours of Le Mans.

A continued factory program in the IMSA WeatherTech SportsCar Championship is also confirmed, which has been run by longtime factory partner Rahal Letterman Lanigan Racing. 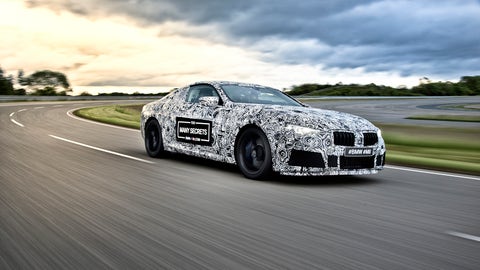