Cars Now Talk to Other Cars, if You’re Into That Sort of Thing – WIRED

Excellent news for the gas-sipping, headlight-blinking, gossipy autos among us. Cadillac’s flagship 2017 CTS sedan will talk to other cars. Well, other 2017 Cadillac CTS sedans, but it’s a start. If the government gets its way, all cars will talk to each other one day soon.

Engineers call the technology vehicle to vehicle communication. General Motors and Uncle Sam call it the future of automotive safety in a country where more than 32,000 people died in collisions last year. Today, V2V might let one Cadillac warn another to a predicament. Maybe it’s braking very hard, and it wants other luxury car drivers near by should take care. But give it time. Advocates see a day when the technology facilitates communication between all vehicles, maybe even autonomous ones. The National Highway Traffic Safety Administration believes V2V could “revolutionize motor vehicle safety” and save more than 7,300 lives annually.

Now, there is some controversy here. Some people say autonomous vehicles, which rely upon LIDAR and other technology to see the world, do not need V2V. Others question whether the technology is worth the cost of deployment, about $300 per vehicle. And you have to wonder if the auto industry ought to invest in technology that may be outdated, or even obsolete, before it reaches most drivers.

General Motors, which owns Cadillac, loves V2V. So does the government. In December, the National Highway Traffic Safety Administration proposed making dedicated short-range communications—one standard for V2V—mandatory in all new cars by 2020. As the rule wends through the regulatory bureaucracy, Cadillac thinks it made the right move, at the right time. “We’re excited to be part of this technology, pioneering this technology,” says Matthew Kirsch, an engineer in Cadillac’s automated driving and active safety group.

Of course, being a pioneer means you’re on the frontier alone. So far, the 2017 is the only car in the world that comes standard with dedicated short-range communications.

How Does This Talking Thing Work?

The Department of Transportation started investing in dedicated short range communications 18 years ago, and has poured more than $700 million into investigating intelligent transportation tech. The technology, contained within a discrete module and antenna in the CTS, can transmit about 1,000 messages each second to any similarly equipped car within a 1,000-foot radius.

Usually, the messages consist of “Hello, here I am,” or “This is how fast I’m traveling, and my direction.” In panicked situations, the communications get more interesting. A car might say, “I just braked hard,” or “My airbags deployed” and convey that info to surrounding cars, alerting them to problems ahead so drivers can slow down. Automakers from Audi to Tesla already offer forward collision warnings, but they use radar. Such a system depends upon your car seeing what the car ahead is doing. Dedicated short range communication is faster, because the car ahead is telling your car what it’s doing.

The technology is particularly useful in intersections, where drivers and radars may have difficulty seeing a car approaching or determining its speed. And, like Superman, it can see through walls and other objects, so it knows if a car is coming out of a blind driveway or from between two parked cars.

What Else Is Out There?

Sold, yeah? Not so fast. A key part of the system may be in jeopardy. Way back in the 1990s, when the government started singing the praises of V2V, the Federal Communications Commission set aside the 5.9 GHz spectrum for the technology. The FCC expected the tech to take off quickly. A generation later, it’s still waiting, and the tech sector covets that end of the spectrum. 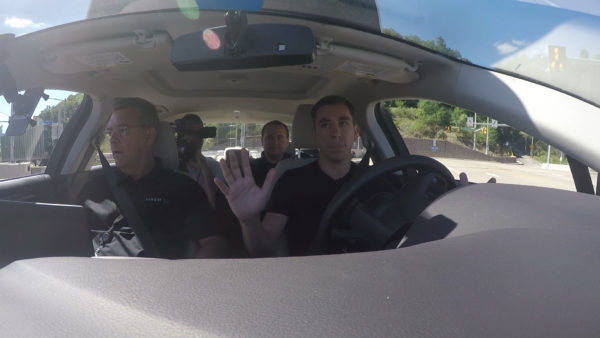 Self-Driving Cars Won’t Save Everyone. In Fact, They’ll Kill

Not to worry. There’s always the 5G cellular, right? It’s fast and dependable, just the thing for sending messages between cars. But so much about 5G remains uncertain. Don’t expect nationwide service until 2020 at least. And even that requires planting new infrastructure, including tiny antennae installed from the mountains, to the prairies, to the oceans white with foam. “Where the rubber hits the road for me is 5G doesn’t exist yet,” says Elliot Katz, a lawyer who leads the connected and self-driving car division at the law firm DLA Piper.

Either way, dedicated short range communications looks like a winner, given the strong push by the National Highway Traffic Safety Administration. “I think there’ a lot of investment and momentum on the federal government’s side,” says Stephen Smith, a Carnegie Mellon University roboticist who studies intelligent transportation systems. “I think that’s where I’d put my money now. But anything could happen.”

OK, but Seriously: Should I Buy This Car?

So even if the talking 2017 Cadillac CTS is not terribly useful right now because it can only communicate with another 2017 Cadillac CTS, there’s a good chance it will communicate with other vehicles in the not-to-distant future. That could improve safety and convenience. For many, that’s worth the $$. “Even if, in the first couple years, it’s a fairly small percentage of lives saved, that’s worth doing,” says Josh Switkes, co-founder and CEO Peloton Technologies. His company developed technology that lets one driver control two trucks, something called “platooning,” using dedicated short range communications. “We need to prevent those accidents any way we can,” he says.

But there’s a risk the technology could be irrelevant before it is widely adopted. Autonomous vehicles don’t necessarily need V2V because they’ll use artificial intelligence, lidar, and cameras to know where they are, what’s around them, and how it all fits together. “V2V is complementary but not necessary to self-driving cars,” says Chan Lieu, an advisor to the Self-Driving Coalition for Safer Streets. “We don’t want to wait for full V2V deployment before we can have self-driving cars.” The timing doesn’t help V2V, either. The first autonomous vehicles are expected at about the same time the government’s proposed rules would take effect.

“Could [V2V] end up being a stopgap? Of course,” says Katz. “But it’s definitely not the way NHTSA is currently thinking about it.” The transition to self-driving cars may be long and weird, buffeted by the winds of public opinion and the limits of sophisticated tech. In the meantime, many argue, might as well look to a more old-fashioned tech. Now someone get this Cadillac some friends to talk to.

Inside the World’s Largest Wind Tunnel