$52.79
Home › Blog › Auto › Connecting Your Car to Your Smartphone Can Make Auto Data Work for You – Wall Street Journal 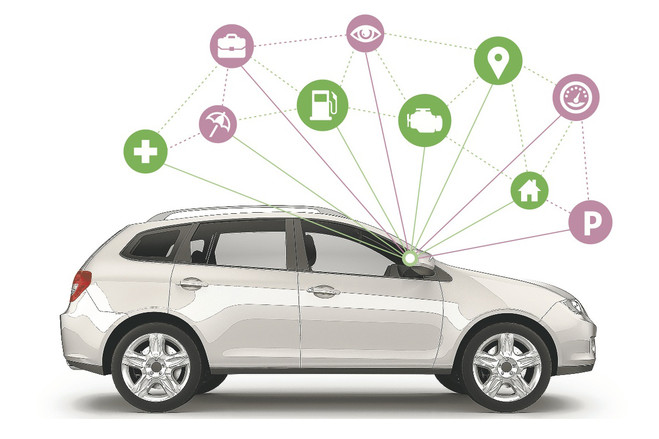 If your car could talk, you might be surprised by how much it has to say.

Ease up on the gas pedal, buddy.

Don’t forget to expense these miles.

Hey! That valet with the smirk is taking me for a joyride.

Yet hearing from your car is no longer strictly the domain of “Knight Rider,” the dumbest show about TV’s smartest car. My modest 2013 Volkswagen
VLKAY


communicates all of this and more with the help of a type of gadget that opens up the computer under the hood.

The devices, including the Automatic, the Mojio and the Zubie, can fast forward to the future almost any car built after 1996 by connecting it to the Internet. Plugged into diagnostic ports most vehicles already have under the steering wheel, they collect data about the engine, fuel efficiency, the car’s location and even your propensity to slam brakes in a way that perturbs your mother. Different from Apple CarPlay and Android Auto, which let the infotainment systems draw from your phone, these devices unlock information about what’s happening deep inside the vehicle—like a Fitbit for your car. 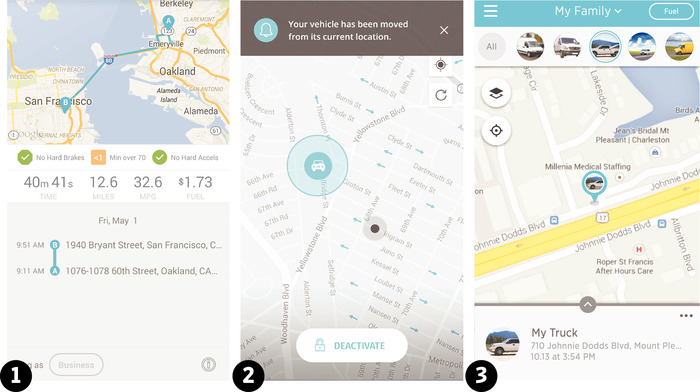 When the $100 Automatic debuted as a “smart driving assistant” in 2013, its app was mostly designed to nag about bad driving and fuel efficiency. This appealed to car nuts and nervous parents of teen drivers. For a wider audience, unlocking the data in a car was at best a novelty and at worst a scary reminder that cars are now hackable.

Now connected car gadgets are gearing up for a second act. Newer models, like the $150 Mojio and the $100 Zubie, come with independent cellular data connections so they can report what your car is up to and its location, even when you aren’t driving it.

Better yet, all three devices are opening up to outside app makers. So instead of just a backseat driver, now a connected car can be a mechanic, accountant, household manager and even insurance broker.

If cars are at the center of your family or work life, the latest Automatic and the more capable and more expensive Mojio are worth installing, because they make driving safer, simpler and less costly.

My eureka moment came on a business road trip. Normally, I forget to do all the paperwork to get reimbursed for driving my own car. But the latest Automatic—and soon Mojio and Zubie—has the ability to connect directly to my company’s expense management system, called Concur. As I parked at my destination, one tap on my phone (or Apple Watch) added the trip’s mileage and destination to an online expense report. In two trips, the gadget paid for itself.

But wait a minute: Why don’t cars already do this on their own? It’s infuriating that the most expensive piece of technology I own is also the dumbest. 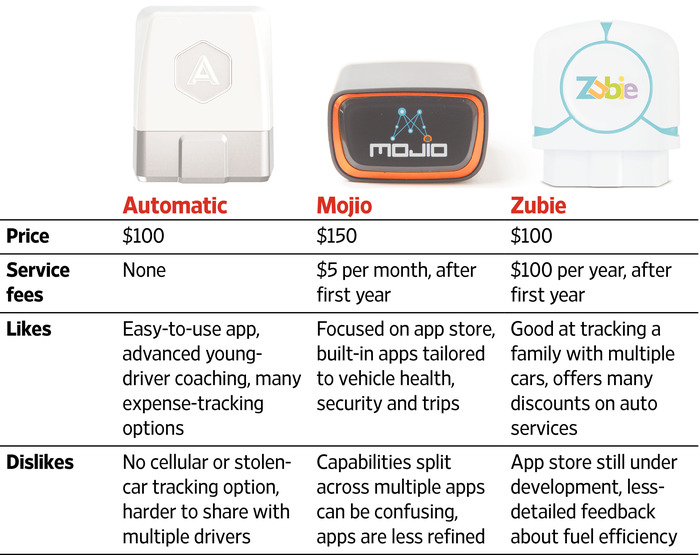 Automakers have been slow to push into smartphone-style connectivity because of long development cycles, reluctance to be locked into outdated technology, an abundance of caution about breakdowns and a fear that tech companies might displace their service relationships. Some new cars, including 2015 Lincoln and Chevrolet models, are starting to come with wireless connections, and automakers like Ford are beginning to open up car data to outside apps.

For now, most of us have to retrofit our cars to help them catch up to the smartphone-driven world. Installing any of these three devices isn’t difficult, if you know where to look. Most cars built after 1996 have a mechanic’s port known as an OBD-II (short for “on-board diagnostics”), usually located under the steering wheel. I needed a flashlight to find mine and plug in the three devices I tested, which each look like a phone charger-size USB thumb drive.

It’s wise to be wary of putting any computer onto the Internet, particularly one designed to travel at 65 mph. Yet so far, none of these three devices has proven to be a safety risk. Unlike some other OBD devices, neither Mojio nor Zubie has the ability to write to the car’s system—just read from it. The only thing Automatic can command your car to do is clear the check-engine light.

Once you’re up and running, all three devices can perform certain basic tasks. Through phone apps, they run diagnostics to make sure your car is humming along and provide alerts when things go awry. (Not every car shares the same information with these devices; my Volkswagen, for example, doesn’t share data needed to remind me to get gas.) They also track your trips on a map using GPS, logging details like speed, fuel efficiency, the route you took and where you parked.

The Automatic does the best job of making it simple to access this information. Every time you get gas, it fills in its own estimate, based on your location, of how much you paid and uses it to calculate the cost of each trip.

The Zubie is a little more complicated, but includes handy coupons for services like tire and battery replacements. The Mojio splits its basic capabilities into three separate apps, which is potentially powerful but also more confusing to use.

The Mojio and Zubie, however, have another trick up their sleeves. With their own cellular connections, they send to the Internet information about what’s happening in your car and, most importantly, where your car is located. Automatic must connect via Bluetooth to your phone, including to send a message to your emergency contacts when there’s an accident. The company sells a version with an independent cell connection, but only to businesses.

There are extra service costs for independent connection. After the first year, the Mojio charges $5 per month, and the Zubie charges $100 per year.

I was on the fence about this feature until my neighbor’s car got stolen. If he’d been using a Mojio or Zubie, it would have alerted him—or his watch, “Knight Rider”-style—about the car moving unexpectedly. The police might even have been able to track it down via the GPS. (A thief could unplug the device, but you’d get an alert.) This kind of surveillance is a comfort if you live in a city, or frequently valet park. And it’s useful if you share a car, or if your brood has multiple cars frequently dispersed all over town.

The smartest thing all of these devices do is open up to outside developers, who dream up new ways to use their data. A few apps already stand out:

•And if you want to warm up your house before you get home, connect into Nest (Automatic).

The devices are making cars much more like smartphones, and the best choice for you is the one with the apps you need. Zubie is behind in the race but has plans to launch its own app store in September. Today, Automatic works with more apps that are useful in my life. But I suspect Mojio, which has the benefit of an always-on 3G connection and put much of its effort into building out an app store, will catch up.

There are even nascent efforts by all three systems at providing personalized insurance coverage. Zubie is working with Progressive to offer safe-driver discounts, based on a one-time data feed from Zubie to Progressive. Automatic is running a similar pilot with several carriers it wouldn’t name. Mojio goes a step further with a service called Onsurance, which uses data about your driving—such as the frequency of hard stops and fast accelerations—to shop on your behalf across multiple carriers. For that one, though, you have to be comfortable letting an insurance company monitor your driving.

But how different is that than driving with your mom in the backseat? Cars have a lot to communicate, and it’s time to start listening.

Write to Geoffrey A. Fowler at geoffrey.fowler@wsj.com