VALENCIA, SPAIN — Waking up the 2019 Audi A8 invokes a brief but dazzling light show where photons pulse across hundreds of LED and OLED elements within the headlamps and tail lamps. The fleeting welcome sequence flourishes with two blue glows adjacent to night-piercing laser diodes, the pièce de résistance of a sophisticated lighting system that uses GPS data to illuminate the next bend before the driver turns the steering wheel. Is this the future of the übersedan? The lighting is but a fragment of the startlingly advanced features Audi hopes will help make the A8 into the gotta-have-it German four-door. Welcome to the (remarkably complex) machine.

Fancy LEDs aside, the 2019 Audi A8’s prime push is its positioning as the first production car capable of level 3 autonomy—“conditional automation.” Audi’s autonomous tech alleviates the driver of the responsibility of monitoring vehicle controls as long as a physical barrier blocks vehicles from oncoming travel. The system, dubbed Traffic Jam Pilot, works from a standstill up to 37 mph and fully controls steering, throttle and brakes in nose-to-tail traffic. Though drivers shouldn’t need to intervene, Audi also says, “The driver must remain alert and capable of taking over the task of driving when the system prompts them to do so.” That is, as long as government agencies modify their policies in time to permit the technology when the car bows in fall of 2018. 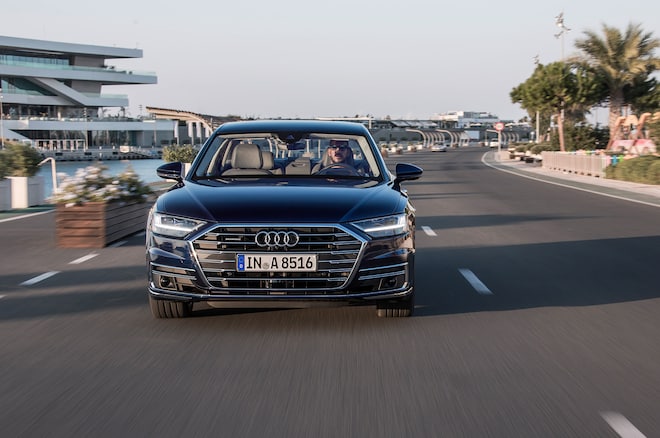 Ahead of the Curve

You might not know it from the mild silhouette or subtly rendered proportions, but Audi’s new design language debuts in this A8—though it seems more like an exercise in extreme discretion than an outright discourse. There’s a smidge of sharpness on the edges of the character lines along the doorsills when viewed straight on (made possible from deep-drawn aluminum panels), but the prevailing theme here is one of gently chamfered edges and elegant understatement. The hexagonal grille may be imposingly large, but it also blends into the car’s front end unobtrusively.

The 2019 A8’s body-in-white is composed of four materials—aluminum, high tensile steel, magnesium, and carbon fiber-reinforced polymer—and claims lowest-in-class (but not yet specified) weight and up to 24 percent greater torsional rigidity than the outgoing model. Its dimensions grow 1.5 inches in length, between .5 and .7 inches in height, and .2 inches in wheelbase, while width shrinks by .2 inches.

Similar to Range Rover’s embrace of the term “reductionism” to describe the lack of ornamentation in its Velar, the A8’s minimalist thread carries inward, where wood, leather and aluminum form a layer cake of reassuringly authentic finishes that are, again, solid and stately, but lacking in drama. There’s a masculinity to the spacious cabin, though those rich tactile materials are interrupted by the door handles made of chromed plastic, an unfortunate counterpoint to the otherwise sincere materials throughout. At least their electrically actuated action is crisply satisfying. 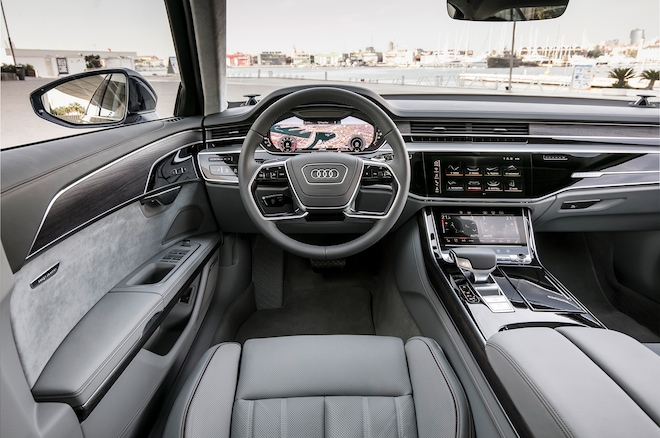 The MMI interface as we know it has been replaced by a 10.1- and an 8.6-inch touchscreen, a system Audi calls MMI Touch Response. The haptic system works well, with subtle feedback and audible clicks, both of which are adjustable. While the top screen manages a vast number of settings from vehicle dynamics to navigation and multimedia, the bottom is dedicated to HVAC and seats—which, incidentally, offer some of the best, deepest chair massages in the industry. Rear passengers get reclining seats and a weighty, removable tablet that also controls an available heated, massaging footrest behind the front passenger seat. The starkness of the dashboard’s black panel screens is, thankfully, countered by a key selection of fixed touch sensitive buttons and dials—namely drive select mode, a volume knob, a stability control button, and HVAC vent controllers that offer additional micromanagement of fan speeds and can shut off the vents altogether, sliding them behind an electrically actuated panel for a clean look.

Audi AI, the system that governs the autonomous driving and parking tech, is not yet avaialable in test cars, so we sampled the two gasoline-powered models confirmed for the U.S. market instead: the A8 55 TSFI, powered by a 340 hp, 368 lb-ft 3.0-liter turbo V-6; and the A8 60 TSFI, motivated by a 460 hp, 486 lb-ft 4.0-liter twin-turbo V-8. The V-6 will be available at launch, followed by the V-8 several months later. Don’t be surprised to see plug-in hybrid and W-12-powered variants down the line.

Quiet certainty is A8’s the modus operandi on the road, aided by a standard adaptive air suspension system that combines a smooth ride with comfort-focused but glued-down handling. The roads in and around Valencia were already eerily smooth, but perhaps more impressive than the ride quality was how the A8L defied its bulky proportions. The A8’s available all-wheel steering system countersteers the rear wheels as much as 5 degrees at lower speeds, easing turn-in and reducing turning radius by 3.3 feet. High-speed stability is bolstered by up to 2 degrees of parallel-phase rear steering. On the winding stretches of mountain overlooking the city, the A8L negotiated dramatically tight corners with relative ease, making it feel considerably smaller than its 123.1-inch wheelbase might suggest. 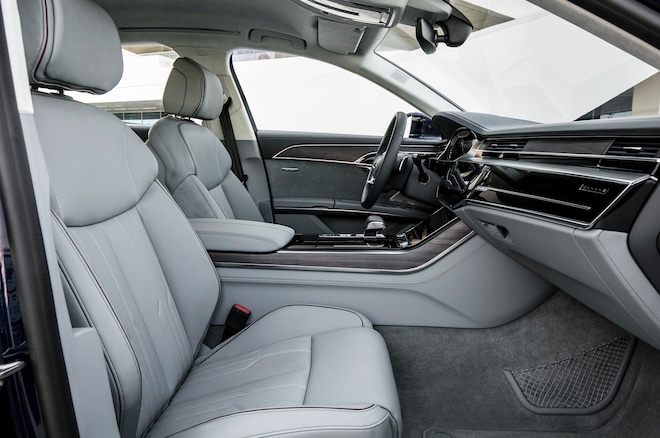 An optional active suspension will be available following market launch. The electromechanical suspension, dubbed Audi AI active, is powered by a 48-volt system that scans the road ahead and can not only lift each wheel by up to 2.3 inches in anticipation of a bump, it can also raise the body nearly 2 inches to aid body control. A staged demonstration showcased a startling ability to soak up a raised section of road, all but eliminating the impact of the offending bump. Observing the system externally reveals a visible lift in the body, the wheel wells becoming more exposed in anticipation of the suspension articulation. Neat. The system can also sense an impending side impact and raise the body up to 3.1 inches in a half-second in order to minimize injury. While Audi didn’t offer road tests of the electromechanical suspension, the parking lot demo offered a convincing argument for the technology.

The 3.0-liter V-6 delivers even, smooth power—0 to 62 mph arrives in a claimed 5.7 seconds—but the 8-speed auto plays so nicely with the mill that it rarely leaves the driver wanting for quicker acceleration. Engine noise comes in quiet, hushed tones thanks to the well-isolated body and double-paned glass. The 4.0-liter V-8 delivers the predictably more satisfying thump of torque that expedites forward movement (Audi has yet to provide an acceleration time), and active engine mounts help smooth out the powerplant’s reciprocating effect. The V-8 also runs rather quietly and gains active noise cancellation to help further dampen the acoustics, though keen listeners might appreciate the faintly audible thrum and the quiet, low frequency bottom note between shifts. Choose the right drive mode setting, and you’ll hardly ever question the computer’s gear selection; take over with the small, wheel-mounted paddle shifters, and you’ll get quick-enough cog swaps that can shift smoothly in milder settings or with a slight punch in dynamic mode. 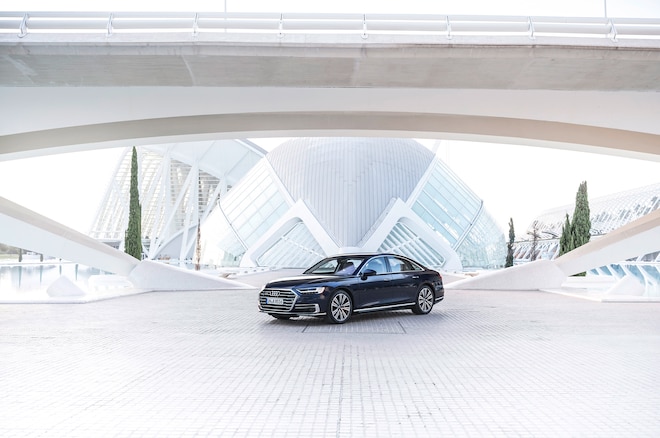 The A8L’s advances suggest Audi is hell bent on becoming the technical leader in the large, high dollar sedan segment. If you’re the type to geek out on whiz bang gizmos, it’s hard not to fall for the A8’s bag-o-tricks, which of course centers on self-driving and gains supported from the trick electromechanical suspension and features like a self-parking function that enables operation from outside the vehicle. But Audi’s latest flagship begs a deeper question about intangibles: this dizzyingly sophisticated machine packs a total of 24 sensors including six cameras, five radar sensors and one laser scanner, not to mention an array of microprocessors to orchestrate and execute the vehicle’s deep skillset. But does this technological tour de force inspire emotion? The A8L claims an impressive skillset and groundbreaking autonomy, but the million-dollar question might leave some traditional luxury lovers cold.