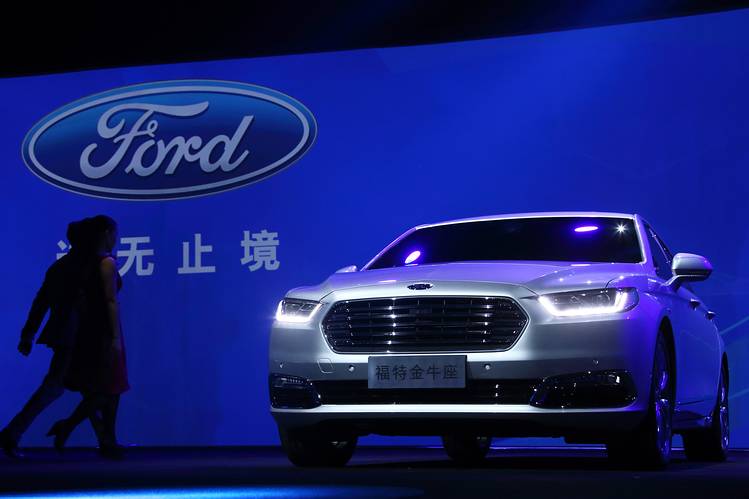 
is betting that a new generation of smartcars will help its rides stand out in China, where its sales have been slipping amid industrywide weakness and rising competition.

The U.S. car marker said on Monday it will invest 11.4 billion yuan, or $1.8 billion, over the next five years to research how to add greater smartphone connectivity, autonomous driving and other smartcar features to its Chinese products. With that investment, the next generation of Ford vehicles for China will be designed around customers there, said Ford Chief Executive Mark Fields.

Ford is hoping the R&D spending push in China will help it develop smartcar features specifically tailored to Chinese drivers. Currently Ford is seeking to install smartcar systems in China using technology it developed and uses in other markets.

“We see China as a very big growth market,” he said on Monday. “It’s a great opportunity to grow not only our core business of selling cars and trucks but also provide services to people that may not want a car but still want to be mobile.”

Potential features include allowing drivers to control more car systems through their smartphones and to use their mobile chat functions, particularly during traffic jams. A video showing snarled traffic from China’s recently ended Golden Week holiday went viral in recent days and illustrated the depth of the problem.

The announcement came at a time that growth of China’s car market has stalled amid a cooling economy and local curbs on car ownership to stem pollution and traffic. China’s new-car sales fell 3.4% to 1.42 million vehicles in August from a year earlier.

Ford and rivals such as General Motors Co. and Volkswagen AG have recently cut prices and run their plants there at less than full capacity. During the first eight months of this year, Ford sold 531,702 passenger cars in China, down 1.2% from 537,997 cars it sold in the same period last year.

Mr. Fields said he expects growth of China’s new-car sales will slow from the double digit rates of past years. “I do see the slowdown this year. But we are starting to see customers come back to the market place,” said Mr. Fields.

Mr. Fields, who took the top job in July, is pushing the company to find new ways globally to attract a younger generation who aren’t necessarily in a position to own vehicles. Congestion, air pollution, the lack of parking lots and the emergence of on-demand car-booking app providers like Uber Technologies Ltd. have turned some young consumers off ownership.

China has fewer than one private passenger car for every 10 people, compared with roughly eight per 10 people in the U.S. Ford in September launched a pilot carpooling program in crowded Shanghai and Beijing. Ford and its partner Dida Pinche, a Chinese online carpooling service provider, has completed 170,000 rides, said John Lawler, Ford’s China chief.

Five years ago, Ford unveiled an ambitious $5 billion plan for China with an aim to double its annual car-manufacturing capacity there to 1.2 million vehicles. Since then, Ford’s share of China’s auto market has doubled to 5% from 2.5% in 2010, according to China’s auto manufacturers’ group.