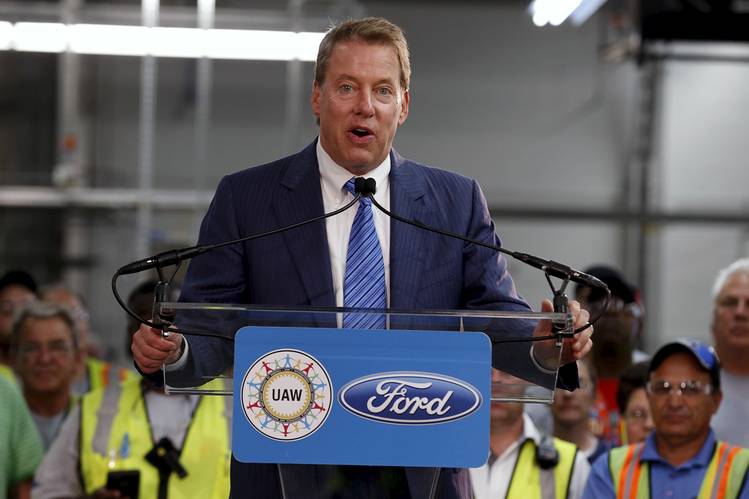 
Chairman Bill Ford Jr. dropped in on the electric-car startup. Sensing “the winds of change were coming,” the visit, along with others he made to Silicon Valley tech firms, provided inspiration to reinvent the company his great-grandfather founded more than a century ago.

“It made me even more impatient,” Mr. Ford, 58 years old, said in his office late last week, characterizing the auto maker as turning over every rock to transition from strictly a seller of automobiles to a company able to respond to the rapid urbanization he sees coming.

The to-do list includes looking at a range of partnerships, including alliances and potential acquisitions, and experimenting internally with new business lines, such as ride-hailing and pay-by-minute car rentals.

For years, Mr. Ford has spoken out about the problems created by increased congestion in the world’s major cities and the need for mobility alternatives as people’s attitudes toward car ownership change.

“To me, it’s a way to reinvent this company that makes it incredibly relevant for the next 50 years,” said Mr. Ford, who has been chairman since 1999. “If we did nothing, we could be consigned over time to an ever-dwindling number of traditional car and truck buyers.”

Mr. Ford’s conviction is replicated in the offices of auto executives across the globe. Even as U.S. light-vehicle sales sizzle at a record clip and low fuel prices reignite America’s passion for profitable trucks and SUVs, the industry is pursuing technologies built on the assumption more people will stop wanting to drive gasoline-powered vehicles within 30 years.

At this week’s North American International Auto Show, car companies will outline plans for autonomous vehicles, ride-sharing and electric cars at a time when 60% of vehicles being sold are light trucks that consume more gasoline.

A primary reason: investors have shown little faith in Detroit’s ability to sustain today’s profits. Wall Street has driven up valuations of a band of automotive upstarts, including Tesla, while shares of Ford and General Motors Co.
GM

On the surface, investors should be enthusiastic. The company is earning record profits in North America, due in part to the success of its new aluminum-bodied F-150 pickup. Analysts expect 2016 to be an even better year for Ford.

Led by Chief Executive Mark Fields, Ford is now looking to expand into new transportation services. Last month, the executive announced a $4.5 billion electric-vehicle plan through 2020, and he has authorized a series of experiments that have engineers exploring new services, including car-sharing and testing autonomous cars.

Mr. Fields, named CEO in mid-2014, could have an ace up his sleeve. The auto maker is in talks with Alphabet,
GOOGL

As part of this effort, Ford is considering creating a separate business unit dedicated to developing autonomous cars for use in ride-sharing and fleets, say people familiar with the plans. Ford would develop software for components, including steering or braking, while Google would provide the autonomous-driving software that governs those functions, one of these people said.

Google declined to comment. Mr. Fields, when asked about whether Ford would form a new subsidiary or company to make strategic investments in ride-sharing, said, “We are open to all possibilities.” Ford will roll out alternative-mobility announcements in Detroit this week, including a new venture called FordPass that will give Ford vehicle owners access to nearby services and live personal assistants via their smartphones.

These moves could alter the direction established when Mr. Ford took over as CEO in 2001. His company was reeling from a tire recall and hemorrhaging money. Resources were thin after his predecessor, Jacques Nasser, invested in a number of ventures and luxury brands, so the family scion implemented a “back-to-the-basics” approach.

In the years that followed, Ford dumped a Norwegian electric-vehicle company it owned, as well as abandoning some of Mr. Nasser’s e-commerce pursuits and other noncore assets. Mr. Ford hired Alan Mulally in 2006 to accelerate the moves; Mr. Mulally shed a list of luxury brands, including Jaguar, Land Rover, Aston Martin and Volvo, and Ford’s controlling stake in Mazda Motor Corp.

Mr. Fields, 54, was promoted to CEO after running Ford’s North American operation for nearly a decade. His job is to figure out how to diversify once again without straying from Mr. Mulally’s so-called One Ford plan that focuses on building cars, trucks and SUVs that are safe, smart, green and fun to drive.

“One of the things that Mark and I talked about prior to him becoming CEO was that he bought into the notion that change is upon us,” Mr. Ford said. “If we do this correctly, we can have a very different-looking company 10 years from now. If we don’t do it correctly, we will be at best a low-margin assembler of other people’s technologies and that’s not where we want to be.”

In an interview, Mr. Fields said he sees the new mobility services as a natural extension of Ford’s core auto business, to which the company will remain committed. But with newcomers, including Tesla, Google and Apple Inc.
AAPL


entering the auto space, Mr. Fields also views the industry as ripe for disruption, and says Ford is in a good position to take advantage of new technologies to reach people in growing urban centers who might not own a car.

“It used to be years ago people were exiting the city and going to the suburbs,” Mr. Fields said. “What we’ve seen over the last decade or so is the opposite happening, particularly among young people.”

Like Mr. Ford, who spent a lot of time in Northern California meeting with tech leaders as an eBay Inc.
EBAY

As Mr. Fields expands, however, Ford has learned from its experience under Mr. Nasser. Mr. Ford’s engagement, therefore, is an important sign that Mr. Fields’s plan has support.

“Everybody in management understands why we’re doing this,” Mr. Ford said, referring to the various new services the company is weighing venturing into. “It’s not an add-on, it’s not something we’re doing on the side.”

Mr. Ford’s interest in alternatives dates back decades. As a young manager, he wanted the company to create cleaner and more fuel-efficient cars, only to be laughed at by colleagues in the auto industry. Today, he remains an advocate for a gasoline tax that would set fuel prices higher.

Today, working from the 12th floor of Ford’s “Glass House” in Dearborn at a desk that belonged to his grandfather, Edsel Bryant Ford, he said Ford is ready to place bets but isn’t rushing into them. His venture fund, Fontinalis Partners, provides funding for startups like Uber rival Lyft Inc., but those wagers are separate from Ford.

Ford’s pocketbook, however, is taxed by other needs as it shoulders increasingly stringent regulations and a need to grow in China and other emerging markets. “Resources aren’t infinite—human or monetary—and when you make bets, you want to make the right ones,” Mr. Ford said.

—Alistair Barr contributed to this article.