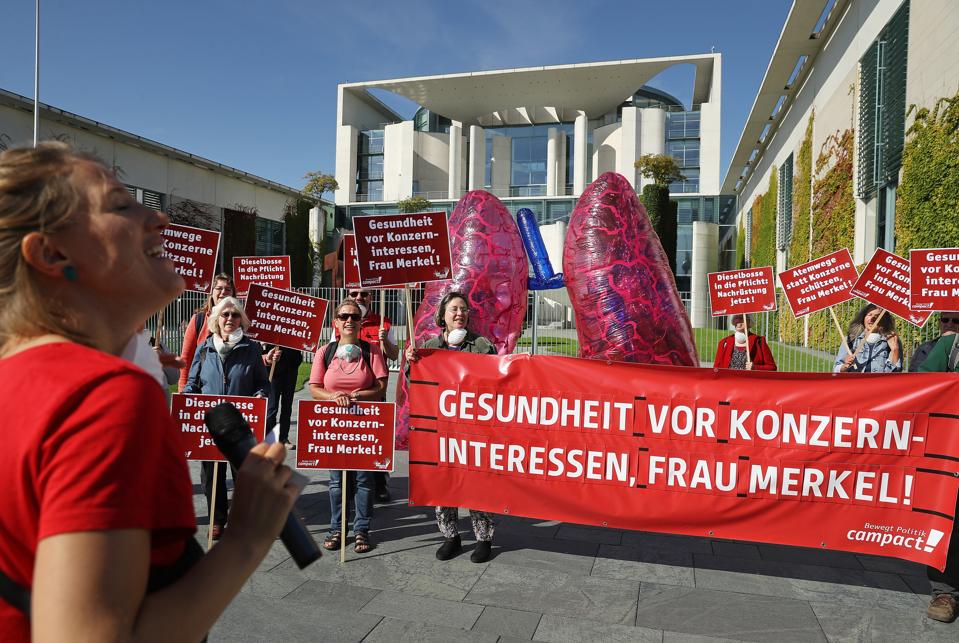 Protesters demonstrating against the harmful effects of the diesel emissions scandal gather prior to a meeting between Chancellor Angela Merkel, state governors and city mayors on September 4, 2017 in Berlin, Germany. The meeting was over the consequences to the diesel emissions scandal, as several city governments have announced they will seek to set a timeframe for banning diesel cars alltogether. The diesel emissions scandal at first only encompassed Volkswagen after it emerged the automaker had installed cheating software to hide the real emissions of its diesel cars during tests, though since then the scandal has spread to Mercedes, BMW, Audi and Porsche. Germany faces federal elections on September 24. (Photo by Sean Gallup/Getty Images)

While the Frankfurt Auto Show will hail the dawn of the electric car, again, conventional wisdom sees the death knell for diesels being sounded next week too.

But like electric cars in reverse, has the death of diesel been falsely heralded, as politics races ahead of economics in condemning this technology, which until recently was seen as the essential, core tool in Europe for meeting ever tighter rules on fuel consumption?

It wasn’t so long ago that diesel was seen as the way to improve fuel consumption as politicians grandstanded their love of the planet and opposition to global warming. Because a diesel engine could develop up to 30% more power than a gasoline engine, fuel could be saved and less carbon dioxide (CO2) would be emitted; result: planet saved. Across Europe, politicians offered tax breaks and other incentives to persuade voters to invest in diesel.

But now, a combination of dieselgate, where leading manufacturers led by Volkswagen, conspired to thwart clean air laws, and deepening fears about the poison diesels spew into the atmosphere in towns and cities, so-called oil-burners have become public enemy number 1.

It is worth remembering that Europeans loved diesel because fuel costs up to three times as much as in the U.S. because of a tax gouge by governments. In the U.K. there is not only a tax rate on gasoline of about 60%, but another levy on top of that brings it to over 70%. The huge improvement in diesel fuel economy was a big bonus at the pump.

The panic about the health consequences of diesels has shattered residual values and become a major issue in the current German general election campaign, which ends September 24. A huge swathe of car buyers will be seeking assurances that the value of their cars won’t be slashed, but that also brings in the argument that diesels in cities and town centres are a mortal threat to the populace. Many big cities like Stuttgart, home of Mercedes-Benz, Munich, Paris and London have all sworn to ban diesels from city centres. Many other towns across Germany face a similar threat and party politicians are using the court system to impose bans. Next year, expect scores of law suits across the country.

So diesel is about to die, right?