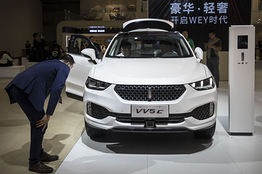 Chinese media cited Changshu Economic Zone officials as saying discussions between the two car makers have been going on for several months. However, both companies have issued denials, according to the reports.

Bernstein analyst Robin Zhu has taken a look at what a collaboration would look like. Zhu says any new JV would need focus on electric vehicles given China’s moratorium on approvals for new gasoline car businesses. The outcome could mean an arrangement similar to Denza, a 50;50 joint venture between China’s BYD and  Stuttgart-based Daimler.

Zhu, who rates Great Wall underperform with a target price of HKD6 a share, has taken closer look at what’s in it for BMW, Great Wall Motor, and Brilliance China Auto, with which BMW already has a joint venture:

Why would BMW do this? Potential explanations for BMW’s interest in such a venture could include (1) the creation of a new stream of EV credits on the cheap, in light of China’s aggressive targets for 2019-2020; (2) potential revenues and profits from licensing technology and/or selling components into the new venture – at BMW Brilliance related party purchases from BMW amount to c.€15k per car, and generate handsome profits for the latter; and possibly (3) for the sake of risk diversification, given China’s (and BMW Brilliance’s) growing contribution to BMW’s group earnings.

The motivations for Great Wall would appear to be more straightforward. Great Wall were among the suitors to be JLR’s Chinese partner, and recent reports on Great Wall’s interest in Jeep serve to reaffirm the company’s ambition. A new EV joint venture would almost certainly contribute negatively to earnings, but would help the company get closer to CAFC/EV credit compliance in 2019-2020 – a key strategic imperative given Great Wall’s longstanding issues with fuel economy…and lack of progress on EV strategy. The halo effect of being associated with BMW perhaps also contributes – even if BYD does not appear to benefit materially from its involvement with Denza and Mercedes.

What this means for Brilliance (not much). We do not expect any Great Wall-BMW announcement to have a material impact on the outlook for earnings at Brilliance. As of the end of this year BMW Brilliance will have 600,000 units of annual straight-line capacity, or 800,000 units max once added shifts are included. The product plan now includes 1-/2-/3-/5-series and X1/X2/X3, with the intention of selling over 600,000 units by 2020. With a battery pack factory also being set up in Shenyang, and several BEV (X3) and PHEV (X1, 5-series) models already confirmed for local production, it’s unclear what a Great Wall-BMW JV could sell within the BMW brand. To reprise the Denza example, we doubt that this influences the views or sentiment of investors looking at BYD, Daimler, or BAIC…