The young carjacker actually does get arrested and sent into a juvenile correction facility from time to time, but only to quickly escape and start stealing cars again.

His latest escape was last Tuesday, according to police, who suspect the runaway then stole an Audi Q5 in the Forshaga municipality.

Swedish media released a 17-minute long video showing the teen driving furiously along highways near Stockholm. The young criminal is seen driving against traffic, outracing dozens of vehicles, and making crazy U-turns. It is not yet clear which of the numerous chases the video features, but the date in the footage shows August 28, 2015.

“There was a 16 year old boy, who was in custody … He managed to get away and a nearby car was stolen. This guy is known for stealing cars all over the country,” Stefan Dangart, Swedish police press officer, told RT.

According to Dangart, the offender is still at large, with the police currently being clueless of his whereabouts.

“Probably, he’s gone to Stockholm” in an attempt to go into hiding, he said, adding that “sooner or later we’ll catch him.”

The young man seems to prefer super-expensive vehicles, with Porsche, Mercedes, and BMW among his favorites.

He took one of his most notorious “joy-rides” in a stolen Lexus at no less but 229 km/ h.

For the record, the standard speed limits in Sweden range from 110 km/h on main highways, 70 km/h on smaller roads, and 50 km/h in towns and cities. 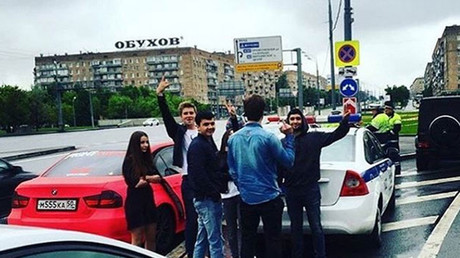 The youth was arrested and put into a juvenile detention in April for gross negligence in traffic, theft, aggravated driving, and driving without a license.

Jacobsson says he can recognize the youth by his “style” of driving. He recalled an episode when the carjacker drove up in a Porsche and gave the finger to the police. “He wants to be chased,” said Jacobsson.

However, police can’t hunt down a fugitive who reaches a speed of 200 km/h, thus becoming too dangerous to chase.

“We interrupt the hunt immediately. We can’t follow suit,” said Jacobsson, who wants Sweden to pass stricter laws for youngsters like the 16-year-old.

“The legislation seems like it does not matter what kind of crime he has committed… He goes back to correction facility, spends four days there and runs again. It is absurd that it will continue [to do so] and that Sweden can’t take care of him.”

According to Jacobsson, it’s a disaster because police “know that one day he will kill himself or anyone who happens to be in the wrong place at the wrong time” during his mad rides.

It’s not exactly clear when the young carjacker started his “career.” According to Aftonbladet, some of his crimes were committed between June and November of 2015 when the car hijacker was only 15. NWT newspaper added that he has managed to escape juvenile facilities at least six times and has four years of “experience” driving posh cars at high speed.