Sedan sales in the U.S. have taken a backseat to SUVs and crossovers. From January through August, SUV and crossover sales were up more than 14% year over year, while sedans were down almost 3%. The slowdown has affected Honda‘s (NYSE:HMC) car sales, but its luxury brand, Acura, has bucked the trend. Acura sedans are putting up a good show, keeping pace with the European giants and outshining the American players. What’s Acura’s trump card? Let’s zero in.

From January through August, Honda’s total sales inched up 1% year over year, while Acura sales increased 9%. Though a good part of the Acura growth was because of SUVs, sedans pitched in, too.

ILX — Affordable luxury
The compact ILX sedan was introduced in 2012 as a 2013 model, targeting the youth market. The initial response was great, with sales jumping 67% in 2013, but the very next year, they declined 13% because of poor engine performance. The 2016 ILX has put things back on track.

With the refreshed ILX, Acura is offering a more powerful 2.4-liter I-4 engine (used in the TLX), eight-speed transmission, and stylish interiors and exteriors for less than $30,000. ILX gets 25 mpg in the city and 36 on the highway, outperforming the government average. It has also earned a five-star safety rating from the National Highway Traffic Safety Administration.

In the first eight months of 2015, ILX sales were up 3%, even as it shares space with heavyweights such as the Audi A3, Mercedes-Benz CLA-class, Buick Verano, and Lexus CT 200h.

TLX — The game changer
Acura launched the all-new TLX in the midsize luxury sedan space, replacing its aging TL and TSX models in August last year, and since then, Acura’s sagging sedan sales have taken a turn for the better. Based on the popular Honda Accord platform, the TLX is giving its rivals — the BMW 5-series, Infiniti Q50, Audi 4, and Lincoln MKZ — a good fight. 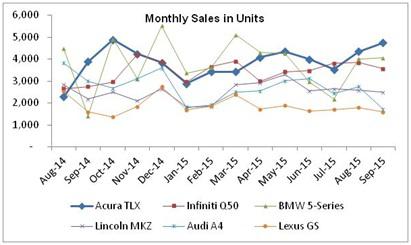 Last year, Acura sold 19,127 TLXes in just five months (sales started in August), and through September this year, sales have surpassed the 34,000 mark. Monthly average sales are at 3,868 units, up from 3825 in 2014. In the first nine months of 2015, TLX has left most of its rivals behind. The sedan’s unique selling proposition is that it offers a long list of features at competitive prices.

The 2016 TLX hit dealers in September, and there has been no price revision. The base price of the 2016 TLX stands at $32,000, which looks affordable in the segment. With price and performance in one place, this midsize sedan is proving to be Acura’s trump card.

Balancing act
Acura’s new general manager, Jon Ikeda, has big plans for the sedans — every facelift will improve performance and product quality. TLX has infused new life into the brand, and the right mix of price and performance is making Acura sedans popular, in spite of the overbearing preference for SUVs.