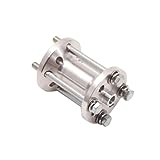 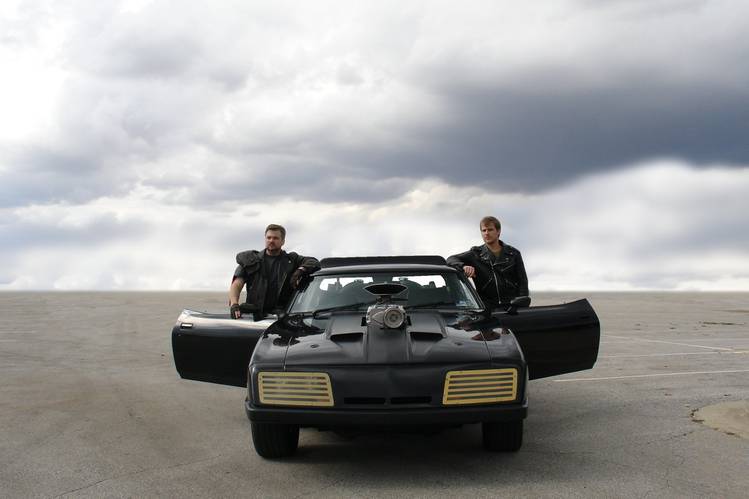 Jake Sposato remembers the moment it all began. It was 1982. He was 15 years old. He was in a movie theater watching “The Road Warrior,” starring the young actor Mel Gibson. Suddenly a black muscle car known in the film as an “Interceptor” roared across the screen.

“I saw that car,” he recalls, “and I thought: That is what a car should be. That is what I will own one day.”

Dee Vyper tells a similar story. He was 12, and there was that black car. “It was the meanest muscle car ever to roll across a screen,” he says. “Man, when I saw ‘Mad Max’ and ‘The Road Warrior’ as a kid, everything changed.”

Now the subculture devoted to the films’ wildly imaginative vehicles is getting ready for a momentous event.

“Mad Max: Fury Road” hits U.S. theaters on May 15, the first new Mad Max film in 30 years. Die-hards are gearing up, and putting the finishing touches on their replica vehicles and costumes.

“Mad Max,” from 1979, plus “The Road Warrior” and 1985’s “Mad Max Beyond Thunderdome” chronicle the adventures of an existential antihero in a postapocalyptic future. The film’s world-wide fans, mostly men, dress in film-correct costumes at fan gatherings. Shoulder pads, old hockey goalie masks and Mohawk haircuts are standard equipment. Together, they re-enact scenes from the movies.

Bill Brown, 52, an aerospace welder who lives outside Portland, Ore., is finishing the second Interceptor he has owned. He plans to show his car in front of his local theater showing the movie.

“There are plenty of fans here in the Northwest,” he says. “Even if the theater doesn’t want us, we’re going to show up anyway.”

Mr. Sposato, 47, a software-quality-assurance engineer from Lewisville, Texas, owns three Mad Max replicas: a Goose bike, an Interceptor, and a Nightrider, which is the police car stolen by a character called Nightrider in the first movie. The berserk villain is known for this bit of dialogue: “I am a rocker, I am a roller, I am an out-of-controller!”

Like all Mad Max replicas, Mr. Sposato’s were custom-built. With the new movie coming, he says, “I’m setting up exhibitions of the cars wherever I can.” His plans include events in New Mexico and Kansas. 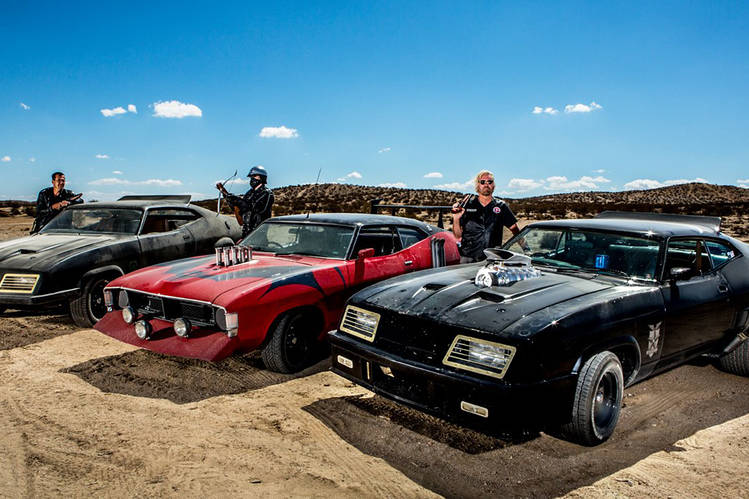 The Mad Max phenomenon began with the first movie, shot on a shoestring budget in Australia and starring the unknown Mr. Gibson. “There is enough violence and retribution to satisfy the most pseudo-pathological sensibility,” a Boston Globe critic wrote at the time. The film, and its sequel, were box-office sensations.

While the films made Mr. Gibson a star, “the main characters of the first two movies were really the vehicles,” says Mike Hughes, 61, an engineer from Bethel Island, Calif., who owns a replica Interceptor.

For decades, gearheads cultivated their passion for the films, building crude replicas in their garages. Then came the Internet. Enthusiasts flocked to forums to trade photos and movie lore.

“Before the Internet, I thought I was one of a handful of crazy nutbags that was into Mad Max,” says Mr. Vyper, 45, who is a partner in Seattle company called Mad Max Cars. It builds replica vehicles and parts, and imports Australian Ford Falcons, the car on which the Interceptor is based. He realized: “There’s millions of guys, in so many countries, who are totally into this car and this movie.”

Mr. Hughes remembers the moment he first sat in a replica Interceptor. “It was such a rush,” he says. “I had to remind myself to continue breathing.” He bought one and it has “taken my life in directions I couldn’t imagine at the time,” he says.

Full-costume gatherings and scene re-enactments now occur regularly. (One American crashed a motorcycle and died in early March, at a Mad Max gathering in Australia.) Two annual festivals are dedicated to Mad Max and wasteland-theme vehicles—Roadwar Northwest in Tacoma, Wash., and Wasteland Weekend, a four-day event in the California desert. “I lived like I was in the movie for four days,” Mr. Vyper says of last year’s festival.

When Warner Bros. released a trailer for “Mad Max: Fury Road” last July, the community went wild. Membership of the Mad Max Replica Cars Facebook page (run by Mr. Brown) exploded to well over 4,000 from about 800. Mr. Sposato posts videos of his Interceptor on YouTube. One now has more than 2.8 million views.

Meanwhile, the phone at Mad Max Cars, Mr. Vyper’s replica business, started ringing. “It’s gone totally off-the-wall crazy,” he says. He estimates that there are thousands of wasteland-theme cars out there, while actual Mad Max replicas, built or under construction, number in the hundreds.

According to Mr. Sposato, his Interceptor was built from molds used to build the original film cars, and the car was used in re-enactments at the original set locations in Australia. “It has been to the holy land,” he says.

Already, the new movie has caused controversy. It was made by George Miller, who directed the earlier movies. But the trailer has fans questioning whether the new film fits into the timeline of the earlier ones. Also, Mr. Gibson isn’t in it; the new film stars Tom Hardy.

Nevertheless, at theaters across the globe, fans will show up with their cars and costumes. In anticipation, Mr. Brown has been working on a passenger seat in his Interceptor for his dog, a blue heeler (or Australian Cattle Dog)—the same breed Max has in his Interceptor in “The Road Warrior.” But certain details he can’t perfect. “My dog doesn’t have the exact film-correct markings,” he says with a laugh.