$23.28
Home › Blog › Auto › Norway has fallen in love with electric cars – but the affair is coming to an end – The Guardian

Norway‘s traffic jams are becoming the cleanest and quietest in the world due to a flood of drivers buying electric cars which now power around the country’s cities on hydro-electricity, competing for free charging points.

For three months at the end of 2013, the luxury electric sports car the Tesla Model S and Nissan Leaf family electric car were the best-selling models among all cars sold in the country, beating popular and conventionally-fuelled cars including the VW Golf.

The latest figures suggest that over 21,000 all-electric vehicles (EVs) are now registered in the country of 5 million people with sales running at over 1,200 a month, or over 10% of all sales. That compares with a total of around 70,000 EVs registered in the US with a population of 313 m, and just 5,000 in the UK with apopulation of 63m. Dealers expect there to be more in Oslo than in Los Angeles and San Francisco combined within a year.

The Nordic rush for zero-emission vehicles, which have a range of just over 100 miles in the case of the Leaf, is less inspired by concern for the environment than for the chance of free commuting in the bus lane and generous incentives, says the industry. 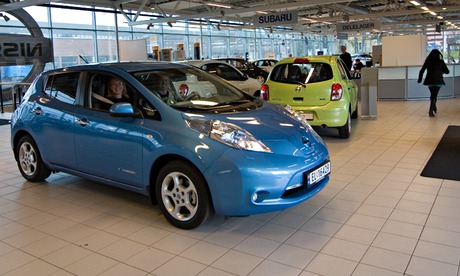 
Battery-powered cars in the world’s fourth richest country are not just exempt from high rates of purchase tax, and VAT, but pay no road and ferry tolls or parking fees, cost less to insure and can be charged up for free electricity from thousands of points. Local government will also subsidise the installation of charging points in homes. Research suggests the subsidies could be worth nearly £5,000 a year per car.

“We needed a new family car. We got a Nissan Leaf because it was really cheap and we did not want to pollute the air”, says Maren Esmark, ceo of Friends of the Earth Norway. “We felt we were supporting the technology but the reason why most Norwegians are buying them is because they have a lot of money and can afford two cars, and because they can use them in the bus lanes.

“At the start we got comments like ‘do you really think you can save the envirornment with that car?’ but now they are so common that they are not noticed.”

By far the two most popular are the Sunderland-built Nissan Leaf which was Norway’s third best-selling passenger car last year, selling over 3,500, and the more expensive Tesla Model S which was the country’s best-selling car in September and December. Volkswagen and BMW are now rushing to introduce their versions of electric cars.

“A boatload of Nissan Leafs arrives in Norway each week and is sold almost immediately. It is astonishing. We did not expect this. Electric cars started as an Oslo phenomenom but they are now selling all over Norway. By the end of Ferbruary we expect to be the first country in the world where 1 in 100 cars on the road are electric,” said Sletvold.

But, says the govermnment, the Norwegian love affair with electric cars may end sooner than expected. Incentives will be withdrawn, or reconsidered, when 50,000 zero emission cars have been registered or come 2018, whichever is the earliest. At the current rate of sales, the 50,000 figure could be reached within 18 months. 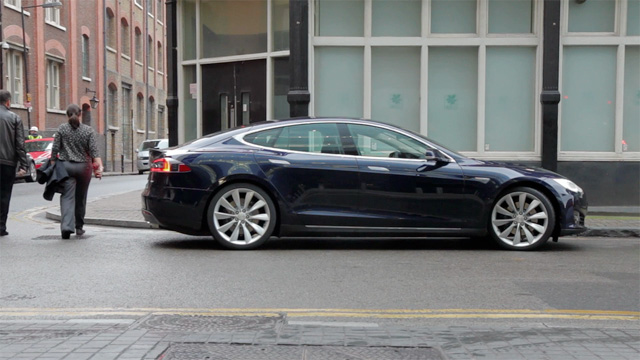 Link to video: Tesla Model S test drive in London: ‘the opposite of every electric car stereotype’


Besides, the allure of quick commuting and free fuel is wearing thin as they become more popular and defeat the purpose for which people bought them. The vehicles are now so popular that they dominate the bus lanes into Oslo, making up to 75% of the vehicles alowed in them. In addition, it’s getting harder and harder to find unoccupied public charging facilities.