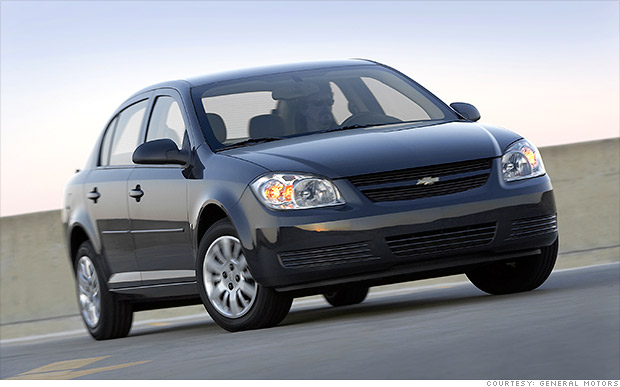 The 2005 Chevy Cobalt, one of the cars involved in the company’s controversial recall.

An auto safety group says federal data show there were 303 deaths in recalled General Motors cars in which airbags did not deploy, but GM says the report misrepresents raw information about crashes.

The Center for Auto Safety, a public interest group started by Ralph Nader and Consumers Union, has written to federal safety regulators charging that the number of accidents is far greater than being admitted by GM.

General Motors says it has traced a defect in an ignition switch to at least 12 deaths. The problem caused the car to shut off while driving — disabling the airbag system.

But GM disputes the Center for Auto Safety’s suggestion, reported Thursday night by the New York Times, that all those deaths are tied to the problems with the ignition.

“Without rigorous analysis, it is pure speculation to attempt to draw any meaningful conclusions,” the company said in a statement. “In contrast, research is underway at GM and the investigation of the ignition switch recall and the impact of the defective switch is ongoing.”

One possible reason a car could have a fatal accident without an airbag deploying is if the car is hit on the side or rolls over. Side air bags are designed to protect drivers and passengers in such accidents, but they were only optional in most of the cars involved in the recall.

GM has hired outside investigators to conduct an investigation into the recall. A Congressional committee and federal prosecutors in New York are also conducting probes into the recall process. And the company faces lawsuits both from families of crash victims as well as shareholders.

Part of what is being investigated is whether GM and the National Highway Traffic Safety Administration ignored signs of problems for too long, which resulted in the subsequent crashes.

GM’s own filings with NHTSA show that its engineers were aware of a problem at least as early as 2004 and perhaps as early as 2001, yet it did not order a recall of 1.6 million vehicles worldwide until February of this year.

GM CEO Mary Barra claimed in letter earlier this month that company leadership was not made aware of the problem until February and that it then acted “without hesitation” to order the recall. The recall problem is the major test for Barra, who in January became the first woman to head a major automaker.

The Center for Auto Safety complaint about the 303 deaths is in a letter to NHTSA in which it complains that the agency fell down in the job in not requiring GM to order a recall much earlier before most of those fatal crashes.

“The only way NHTSA could not see a defect trend is if it closed its eyes,” said the group’s letter.

NHTSA, in a statement Friday, said it looked at the crash data more carefully than the Center for Auto Safety did in its report.

“The data available to NHTSA at the time did not contain sufficient evidence of a possible safety defect trend that would warrant the agency opening a formal investigation,” the agency said. It said it has since launched “an aggressive investigation into the timing” of GM’s recall.