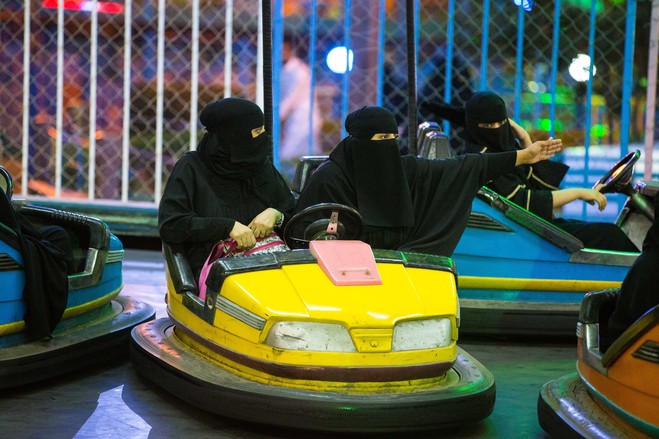 JEDDAH, Saudi Arabia—Joudi al-Omeri drove in circles. And when cars came in her direction, she swerved. These were electric bumper cars, but in Saudi Arabia, the ride doesn’t always live up to its name.

“I come here to drive,” said Ms. al-Omeri, a 27-year-old homemaker still giddy from the roughly five-minute, mostly crash-free ride in her red-and-green two-seater. “It’s much better than bumping against others,” she adds. 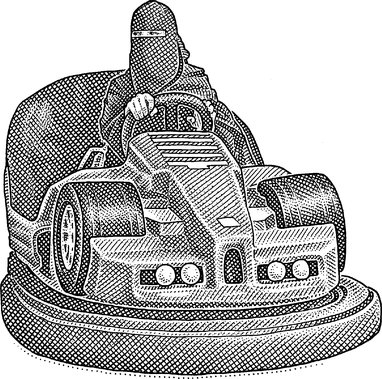 At the weekly ladies-only night at the Al Shallal Theme Park in the coastal city of Jeddah, women discard head scarves and head-to-toe black gowns to reveal the latest trends—ripped jeans, tank tops, and tossed-to-the-side ’80s-style hair. For many of them, the biggest draw of the amusement park isn’t the few hours of fashion freedom. Instead, they go there to get behind the wheel—even a bumper-car wheel—in a country that bans female drivers.

There are no loud bangs or ferocious head-on crashes. There are a few slow-speed collisions, but also a lot of dodging, as many women are content with just gliding over the smooth surface. For some, the biggest risk of bumping into each other is while taking a selfie.

“They love driving the cars,” Aman al-Abadi, the ride attendant, said of the women who were getting back in line for another spin. “Men are always bumping.”

With the exception of remote corners of the desert kingdom—where Bedouin women sometimes get behind the wheel—the amusement park offers a rare, hassle-free environment for women to hone their driving skills. That is partly why, on ladies nights, there is a winding queue at the bumper cars.

Outside the theme park, activists, writers and even some politicians now are pushing to lift the ban on driving actual cars. One of the strongest cases proponents make is financial: Many women, even those with jobs, simply can’t afford a driver.

In this conservative society, there are many who resist it, warning that allowing women to move freely without a male guardian would expose them to social evils and personal trouble.

Among them is Mohammed Bayea, who on mixed-gender evening at the amusement park was happily driving alongside several women on the crowded bumper-car platform. There was the occasional knock, but for the most part men and women steered clear of each other. The women wore traditional dress.

“It’s OK if they drive here,” said Mr. Bayea, a Riyadh native who was on vacation in Jeddah. But he said he wouldn’t want them driving in the real world. “I am a nice guy, I don’t flirt with women. But other men will.”

The driving ban has helped lead to the flourishing of ride-hailing apps by companies like Uber Technologies Inc., which recently announced it received a $3.5 billion investment from Saudi Arabia’s sovereign wealth fund. 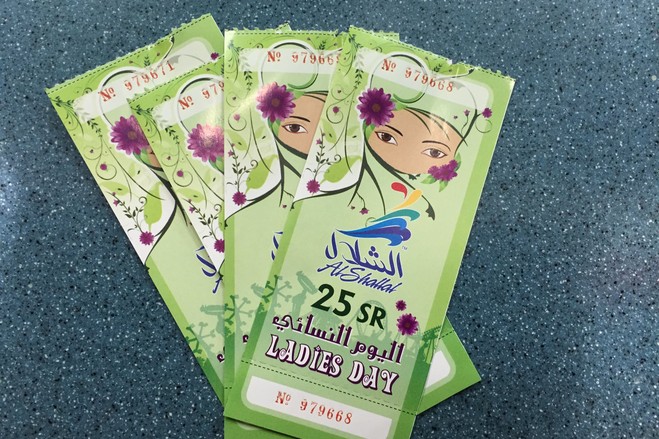 While women at Saudi Arabia’s amusement parks often seek a driving experience that mirrors crash-avoidance reality, men relish bashing into each other. When they take to the bumper cars, their goal—like pretty much everywhere else in the world—is to gather speed for maximum impact.

When it comes time for the women to drive in a mixed-gender theme park in the town of Abha, a big black curtain goes up around the bumper car platform to shield the female drivers from outside view. The cars resume driving in circles and the platform becomes placid again.

Some women have unwittingly breached the no-bumping etiquette. When, for the first time in years, Arwa al-Neami went on the bumper cars in the theme park in Abha, she decided to chase the other female drivers. She got a lot of angry shouting in return.

“They would scream: ‘Please, don’t bump me! I am trying to drive!’ ” says Ms. al-Neami, a Jeddah-based artist who began documenting the phenomenon in 2014 as part of an art project called Never Never Land.

Some women viewed the bumper car for what it was: Amusement. “It’s just a game,” said Darin Twergi, a student, with a shrug. “It’s not that big a deal if I drive or not.”

Others regard time spent in a brightly colored open-top vehicle with a hot rod attached to the ceiling as a serious practice session.

Before she moved abroad for university, Sama bin Mahfooz said she would go to the theme park in Jeddah especially to drive. “We never get a chance to in Saudi Arabia—this is the right place to do it,” says Ms. bin Mahfooz, 20. “Whenever my best friend would hit me, I would tell her: ‘No, let me drive, let me drive!”

Her wealthier friends were less interested. They would say “we have drivers, we don’t need to do that,” she recalls.

In a country where only 23% of Saudi women have jobs, ladies-only nights bring women out in force. Every employee is in fact a woman, from the popcorn sellers to the security guards to the bumper car attendant. The men have the night off.

And while cinemas are normally banned, there are two of them in Al Shallal alone. Granted, the movies last under five minutes, and the experience is really just about the special effects: 3-D screens, seats that jolt and sprays of water.

For many women, the biggest attraction of ladies nights is simply a man-free world. One woman says she goes every week, ostensibly to accompany her teenage daughters. “The girls can wear what they want and roam around freely,” said Nadia Shamsaan, 33. “But I also come here to relax,” she added, sprawled on an outdoor sofa in a patterned shirt and jeans.

Outside the park, reality hits. The women step out in their all-covering abayas to find a tangle of traffic that snarls around its perimeter. The men have come to pick them up.

Many of the female bumper car drivers confide they would like to sit on the driver’s seat outside the park’s high walls, too. Some of them say, secretly, they already have. Ms. al-Omeri, the homemaker, says with pride: “I’ve driven in the desert.”