A couple of days ago, a Buzzfeed writer got a ride in one of Google’s autonomous koala-cars and got an erection so powerful that it drew enough blood from his brain to cause him to have a mild stroke that turned him into some sort of inane troll. At least, that’s the only theory that makes sense.

For the most part, the article is pretty innocuous, covering the usual autonomous cars observations and questions like so many of us have done before. But there’s two parts that push the article over the border and into the garbage land of Trollsylvania.

The first is this description and quote of questions from “a scowling, red-faced reporter from Australia.” Questions the author later said were “really dumb”:

… after explaining how much Australians love their cars (we know), bellowed at a Crocs-clad Sergey Brin: “How dare you mess with that relationship between the car lover and their car? And is the goal here a future without human drivers?”

And the second part is this:

Cars are giant, inefficient, planet-and-people-killing death machines… So go fuck a tailpipe if you love cars so much. Your love for cars doesn’t supersede the lives of 1.2 million people who die in automobile accidents every year. It’s not more important than the energy savings we’ll get from not manufacturing 60 million or so vehicles every year that spend most of their time idle. Turned off. Parked.

(By the way, our own Alex Roy is giving a TEDx talk on this very subject, and this very article, tomorrow.)

Let’s address the Australian’s questions first. I’m not sure that the first sentence is even a question (does anyone expect an answer to any question starting “How dare you?” Would the person say “The manner in which I dare is…?”), and the query about whether or not the future is one “without human drivers” is actually a pretty valid question.

Also, I can’t prove this, but I don’t really believe an actual human ‘bellowed’ the words “How dare you mess with that relationship between the car lover and their car?” If you replace “car” with “God,” it sounds like a line from some low-budget Christian-youth-group stage play.

I mean, if the goal is a future with no human drivers, that’s a big deal, and definitely a very long-term goal, if so. It’d be worth knowing the scope of Google’s vision there, as it would affect almost all claims of safety improvements and energy efficiency.

But more annoying is the second part I posted there. And it’s not even the “fuck a tailpipe” part. Tailpipe-fucking suggestions don’t bother me at all – just be sure to let everything cool down before going to town.

But that’s not even the real trolling, insipid bit. It’s this: “Your love for cars doesn’t supersede the lives of 1.2 million people who die in automobile accidents every year.” There are all kinds of problems with this statement.

For starters, you can’t just blame people who love cars for all automotive-related deaths. It’s not even remotely fair or logical. There is no association between the love of cars and dying in a car accident. An out-of-control truck T-boning you doesn’t stop to ask your opinion on motor vehicles, or whether or not you’re really into the sound of a flat-6 at full throttle.

And, by the same token, it’s not people who love cars that are out killing people in cars any more than an indifferent driver. In fact, you may be able to argue that someone who actually loves to drive would be less likely to be inattentive or texting while driving, and therefore much less of a risk. 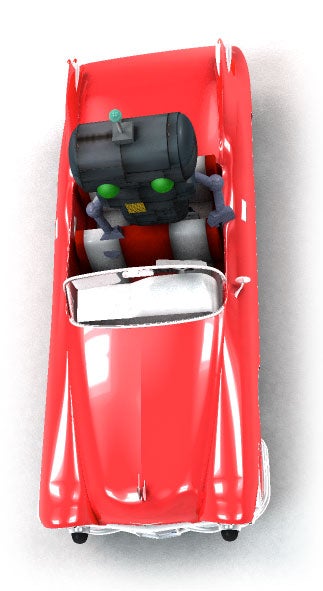 The fundamental problem with the statement, though, is the equating of auto-enthusiasm with all of the problems inherently associated with driving, and building, and running cars. It’s important to remember that there would be no magic, perfect autonomous cars unless we had the several centuries of automotive development that we’ve had. Autonomous cars are still, after all, cars, and blaming car-lovers for the inherent dangers involved in doing anything at a velocity greater than zero is a cheap shot at best, and willfully stupid at worst.

I suppose you could argue racing deaths are directly related to a love of driving, but that’s a very different type of driving, and a very different circumstance of death. I don’t think it’s a relevant comparison to the stats quoted in this article, which are the deaths from automobiles used as everyday transportation.

I’m not against autonomous cars at all. I even have my own specific ideas for what I think they could be. I also believe that one day the roads will be full of autonomous cars, but I don’t think that means that self-driven cars will totally go away.


I Have A Radical But Possible Idea What The Apple

Recently, we learned that Apple had hired Doug Betts, an “auto manufacturing veteran” from Fiat…

If these autonomous cars are going to be so damn good, they sure as hell better be able to deal with my then-more-aged ass tooling around in a 70-year old Beetle. Deciding you want to be one of the people to drive your own car, because you love to do it, or even perhaps because you can’t afford an autonomous car, or find one available in your area or whatever, does not make you somehow liable for millions of deaths by car. At all.

If you’re driving your own car in an age and a place where most cars are autonomous, and autonomous cars are easy and affordable to access, it’s because you give a shit about driving. You’re out to drive, and you’re going to be focused on that. You likely won’t be a drunk, texting jackass in a car you can’t control.

So don’t give me that bullshit that somehow a small percentage of self-driving cars is going to make blood run on the streets.

Autonomous cars are coming, at some point. That’s fine. I get it. But this unnecessary and idiotic vilification of those of us who may chose to drive our own, possibly vintage cars needs to stop, right fucking now.

And maybe I will fuck a tailpipe. And I’m going to love every goddamn minute of it, Buzzfeed dipshit.