This GIF is Amazing, But Those Aren’t Self-Driving Cars – Gizmodo 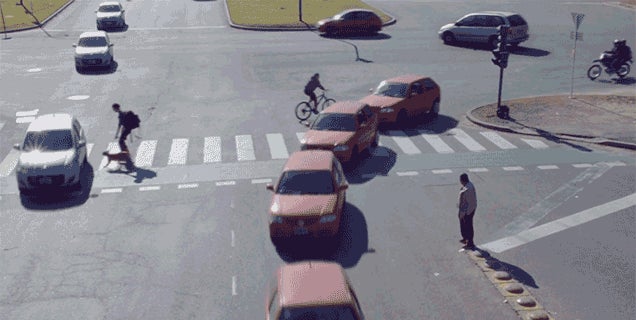 Over the past month, this video of traffic at a busy intersection has gone viral. People are sharing it as a demonstration of self-driving cars on the road. And while there’s some truth to the general idea that cars will be able to caravan and avoid each other much better in the future, that’s not what this video actually shows. The video is an art film that’s been heavily edited in post-production.

The video was produced by a company in Buenos Aires called Black Sheep Productions and directed by Fernando Livschitz. And it looks pretty damn cool, especially with all the near misses involving nonchalant pedestrians. But it’s not a demonstration of driverless car technology — no matter what your friends on Facebook or Twitter might be saying. It’s partly precise choreography of humans with machines, and mostly post-production trickery.

You can watch the full video below: