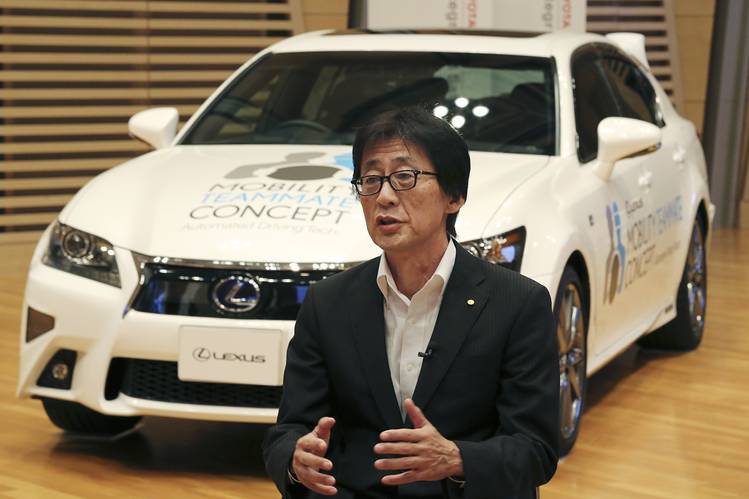 TOKYO— Toyota Motor Corp. plans to make some of its cars fully capable of self-driving on highways by around 2020, it said Tuesday, accelerating the rollout of its autonomous-drive technology and countering Silicon Valley rivals like Google Inc.
GOOGL

Toyota used the term “automated driving” to describe its new system, which allows vehicles to get on and off the highway and change lanes without driver input. That was a shift from its past approach, under which it preferred calling such technologies “advanced driver support.”

“We were afraid that by using the term ‘automated driving,’ people would misunderstand that humans are not involved at all,” said Masahiro Iwasaki, an engineer involved in the development of the technology.

But rival auto makers and Silicon Valley players started to use such terms frequently, and the world’s biggest auto maker by unit sales realized that it needed to market its technology differently, Mr. Iwasaki said.

“Our goal remains the same—improving mobility and decreasing accidents,” he said.

Google’s strategy of developing self-driving cars and aggressively promoting its technology has frequently left Toyota out of the limelight and created the impression that Silicon Valley is ahead. Toyota officials say they don’t think so, because the company has been studying autonomous driving for two decades—since before Google existed.

“We have spent a long time to develop the technology. We have advantages and we want to maintain them as we push forward,” Moritaka Yoshida, Toyota’s chief safety executive, said Tuesday in introducing the self-driving cars.

Toyota believes there are two routes in pursuing the technology, Mr. Iwasaki said. The first is fully autonomous driving cars, which companies like Toyota and Google are testing on U.S. streets. The second category encompasses more reliable, semiautonomous technologies that can be introduced to mass-market cars sooner, possibly within the next few years.

A prototype car that carried reporters onto a highway in Tokyo went into automatic driving mode when a driver pressed a button on the steering wheel near the highway entrance. Without driver input, the car drove onto the highway, switched lanes and exited v ia an off-ramp.

When the car got off the highway, an announcement said the automated mode was ending and urged the driver to take over again.

The Lexus GS-based prototype car uses map data to determine where it should run and when it should change lanes, Toyota said.

It also has 12 sensors for capturing data—one camera behind the front mirror, five radar devices that use radio waves to capture the speed of other vehicles and six lasers that grasp the position of objects around the car.

Toyota named the prototype car “Highway Teammate,” emphasizing that it is intended to help drivers, not replace them. Mr. Iwasaki said the cost of the sensors must be reduced significantly to introduce the technology in mass-market vehicles.

Last week, Toyota started selling vehicles with a device that can communicate with other cars or traffic lights. That could allow for smoother lane-control driving on the highway or help alert drivers about the location of other cars. Toyota is set to introduce the technology, which it calls ITS Connect, in the redesigned Prius that will go on sale in Japan later this year, a person knowledgeable about the matter said.

In September, the company said it would work with the Massachusetts Institute of Technology and Stanford on artificial intelligence research, and it hired a former official from the Pentagon’s research arm studying autonomous driving.