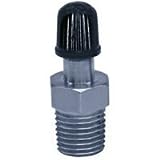 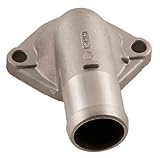 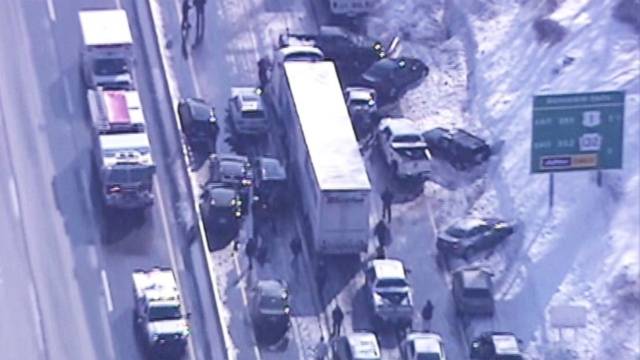 Two major pileups and smaller fender-benders involving tractor-trailers and scores of cars blocked one side of an ice-coated Pennsylvania Turnpike outside Philadelphia on Friday, injuring at least 30 people and tying up traffic for hours.

The eastbound crashes were reported just before 8:30 a.m., in the middle of rush hour and about five hours after a storm that dropped a foot of snow in the area finally moved out.

Speed restrictions put in place during the storm had been lifted at 6 a.m., but rush-hour motorists said the roadway was very slick, calling into question whether it had been adequately treated. State police also suspect sun glare might have played a role.

The accidents created a five-mile traffic jam between the Bensalem and Willow Grove exits of the state’s primary east-west highway. The jam was cleared by the middle of the afternoon, and turnpike officials reopened the roadway in both directions by 4 p.m.

Stuck motorists turned off their engines to conserve gas. One of them, Chuck Wacker, 53, of Plymouth Meeting, counted about 30 smashed-up vehicles around him.

He said cars were spun around, gas tanks were cracked open and glass and plastic littered the road.

Ambulances took 30 people from the scene, but none of the injuries were believed to be major, turnpike spokesman Bill Capone said. Abington Memorial Hospital and St. Mary Medical Center received many of the patients, but spokeswomen at the two facilities said none of the injuries was life-threatening.

State police were investigating the cause of the pileups, but a spokesman said sun glare, icy conditions and excessive speed likely contributed.

“The road looked wet, when in reality it was patches of ice,” said Trooper Adam Reed, a state police spokesman.

Turnpike officials said they had lifted speed restrictions based on road conditions at the time.

“Based on reports from the road crews, the roads were such that we could restore it back to normal posted speeds,” Capone said. “If somebody had said there was still a reason to keep it in place, we would’ve kept it in place.”

Whether conditions changed after that decision would be part of the state police investigation, Capone said. He said he was told the road had been treated, but couldn’t say when.

“I expected this road to be clear,” said Dan Santillo, 65, of Jeffersonville, who was stuck about a mile back. “A major thoroughfare like this? It actually has pieces of ice that were never removed or salted. It just didn’t make sense.”

“I was thinking, what the hell are people doing? It’s icy. They’re crazy,” he said. “People have this false sense of security. I was shocked. Don’t they see the road, see what I’m seeing?”

David Hill, 27, said he wasn’t surprised there was an accident.

“I got on the turnpike and it was nothing but ice,” he said. “I was very surprised at the condition of it. Normally the turnpike is one of the first roads that’s cleared, but today I was driving on solid ice.”