Volkswagen’s auto recall is big, but not yet the biggest ever – Quartz

Yesterday (Oct. 15), German auto maker Volkswagen announced that it will recall 8.5 million diesel vehicles across Europe, beginning in 2016. The cars were fitted with software that allowed them to cheat emissions tests.

The recall is vast. But there have been even bigger automaker blunders before.

In 1980, Ford was forced to recall 21 million vehicles over 10 model years for an issue that caused some cars and trucks to slip out of park. It was, and still is, the biggest single-issue car recall on record, in which the auto maker was at fault. (Ford’s initial response was to give owners warning stickers to place on their dashboards, rather than repair the vehicles.)

Ford was also responsible for the second-largest recall of this kind. Beginning in 1999, the US automaker recalled nearly 15 million vehicles separate recalls, because they were equipped with faulty cruise-control switches which occasionally caught fire.

However, if Volkswagen eventually expands its recall to include all of the 11 million vehicles around the world said to be affected in this recent scandal, it will become the third-largest car recall in history where the car maker was responsible for the issue.

Volkswagen’s diesel recall is expected to cost millions, and has caused stocks to plummet and damaged the brand’s reputation. But it’s not the only auto maker or equipment manufacturer to get into trouble lately. More and more vehicles are being recalled each year, at least in the US, according to data from the National Highway Traffic Safety Administration, which tracks all vehicle recalls in America. Last year, in fact, was the biggest auto recall year ever. 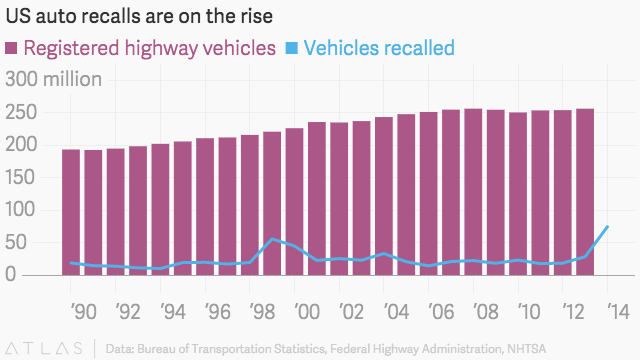