Who has the keys to electric vehicles? – The Boston Globe

Recently, Volvo announced that by 2019, all of its new cars will be either fully electric or hybrids, and Tesla said it is beginning production of its mass-market Model 3. In Frankfurt’s annual auto show, electric vehicles dominated. In the United States, more than 33 models of electric vehicles are already on display, promising consumer driving that is cleaner — and also cheaper.

Soon, electric vehicles will no longer be niche cars driven by the environmentally conscious. They will be lined up at the Dunkin’ drive-thru. They will be vans driven by soccer moms. They will be the only kind of cars carried by Avis and Hertz. They will make up the fleets of self-driving car services, as well as buses and trucks.

The transition to an electric vehicle future in Massachusetts is still in its infancy — only 1-2 percent of annual car sales are electric. But across the country, sales are up, jumping 37 percent last year. Even major oil producers — including OPEC — are revising their electric vehicle forecasts upward, and dramatically.

This has implications far beyond the sale of cars; it will affect, fundamentally, our economy and environment.

Imagine a hot summer day, with tens of thousands of EVs parked in Boston. While their drivers are at work, they could be plugged into the grid, selling power that helps meet the city’s air-conditioning needs during peak hours. If we clean and smarten the grid, we could power our economy more cheaply without fossil fuels. Consumers would have more and better choices, energy dollars would stay here in our local economy, our air would be cleaner, and Massachusetts would take another giant step forward in averting climate change. 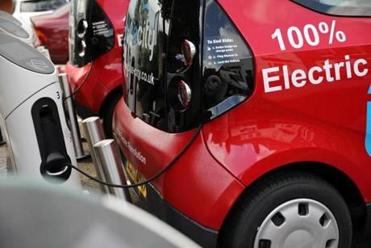 People will still use cars. The remedy is more electric vehicles. Boston is not a leader on this front.

The EV future, however, will not happen automatically, even if some kind of price on carbon provides incentives for clean cars. Why? Because electric utilities hold so many of the keys that can unlock the potential of electrical vehicles.

The Commonwealth has already made a significant investment in consumer incentives and a charging infrastructure. And as we move to a cleaner grid that relies on more solar, wind, and hydropower, EVs will become even cleaner compared with gasoline-powered vehicles. Massachusetts also has technology entrepreneurship that is second to none.

We have world-class universities, innovative start-ups and Fortune 500 companies, catalytic clean-tech incubators, forward-leaning government and quasi-governmental agencies like the Mass Clean Energy Center, and engaged philanthropists committed to a clean energy future. These are necessary ingredients and they are terrific regional assets. But they are not sufficient.

Our electric utilities need to have the right regulatory environment so that consumers, car companies, and clean-tech entrepreneurs will get the right market signals and tools to unleash demand and speed the transition.

First, the state needs to address a chicken-and-egg problem: Drivers are nervous about buying EVs when they don’t see places to charge them, but no one will install charging stations if there aren’t enough EVs to support them. To help break the cycle, our utilities should install highly visible charging facilities in essential locations and then private companies will follow, making EV charging stations as commonplace and competitive as corner gas stations. National Grid has made a proposal to begin this process.

Electric rates should incentivize EV owners to charge their vehicles at times that take advantage of low-cost electricity — for example, at night, when overall electricity demand is low and thousands of wind turbines off the coast will be spinning.

In this new era, regulators should require utilities to develop business models that embrace renewable energy.

Step by step, electric vehicles are showing up in showrooms and on local roads. But the key to fully capture all of their benefits as quickly as possible is to fundamentally overhaul the electric system and bring it into the 21st century. Only then will we be able to create a future in which electric vehicles are truly giving us all they can.

David W. Cash is dean of the John W. McCormack Graduate School of Policy and Global Studies at the University of Massachusetts Boston and former Massachusetts Department of Public Utilities Commissioner.