You might think the Volkswagen group would be wise to keep a low profile at the moment, in the wake of the devastating diesel engine emissions scandal that has yet to play out to its conclusion. But no, the news from the Geneva motor show is dominated by VW group in the shape of its new hypercar, the Bugatti Chiron.

The replacement for the remarkable but frankly absurd Veyron is all the more remarkable, not least for managing to get built at all in a time when VW has pledged to restrict itself to essential, core activities. It’s remarkable, too, in that it takes virtually every Veyron metric and bests it. 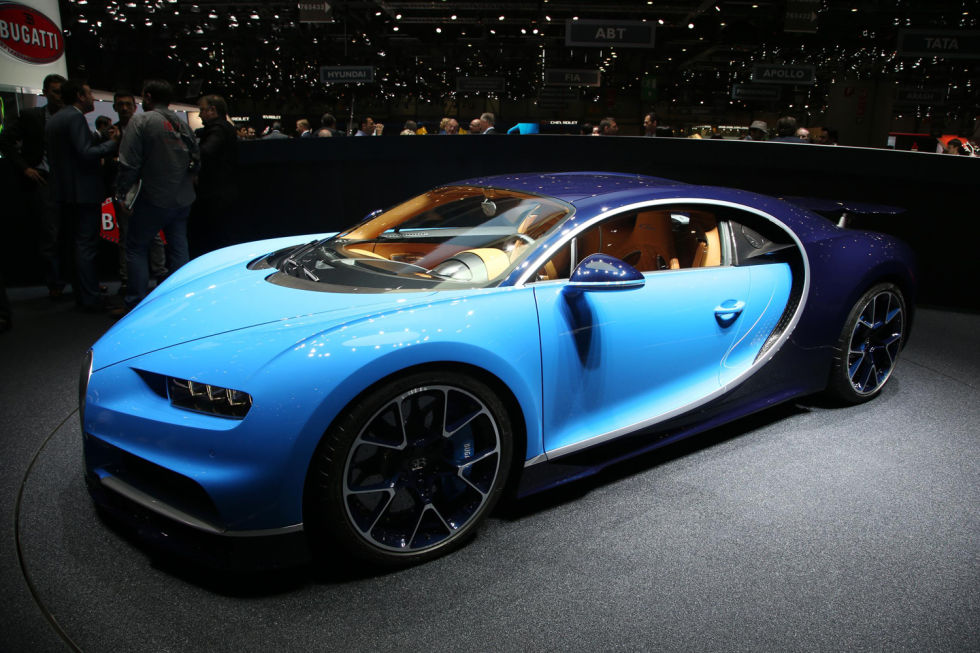 The Chiron is (slightly) longer and wider, significantly taller, and about 150kg heavier than the Veyron, despite weight-saving measures including the use of a full carbon composite structure, a carbon intake manifold and engine cover, titanium brake callipers, and a titanium exhaust system.

Despite the extra weight the Chiron promises to be comprehensively quicker thanks to a big increase in power. As before the engine is an 8.0-litre W16—essentially two narrow-angle V8s sharing a common crankshaft—and boosted by four turbos, but it’s been comprehensively reworked. Two-stage turbocharging is now used, with all the exhaust flow being sent to one turbine on each vee of cylinders at low revs to keep the flow rate up, minimising lag and improving bottom-end torque. All four turbos come into action at high revs to deliver the intake air flow necessary for a high power output.

The engine now delivers a maximum of 1500ps (1479hp), with 1600Nm of torque available all the way from 2000rpm to 6000rpm (the Veyron Super Sport had “only” 1200ps and 1500Nm). All four wheels are driven through a revised seven-speed dual clutch gearbox, with an electronically controlled differential providing rear-wheel torque vectoring—apportioning power between the wheels to control the Chiron’s attitude in a corner. It also provides what Bugatti calls an “easy to drift” function, though that’s relative: drifting a 1500-horsepower, four-wheel drive, two-tonne device with a list price of €2.4 million is likely to be a bit of challenge, unless you’re Chris Harris.

Bugatti is cagey about ultimate performance, but says the Chiron should beat the Veyron’s 0-62mph acceleration time of 2.5sec, and will be limited to 261mph for road use. Without the limiter, who knows? The fastest Veyrons were timed at 268mph, so 275mph should be in reach for the more powerful Chiron, assuming the gearing is right and the tyres hold out. And assuming you can find a suitable road: handily, VW’s own Ehra-Lessien proving ground has a 9km straight… 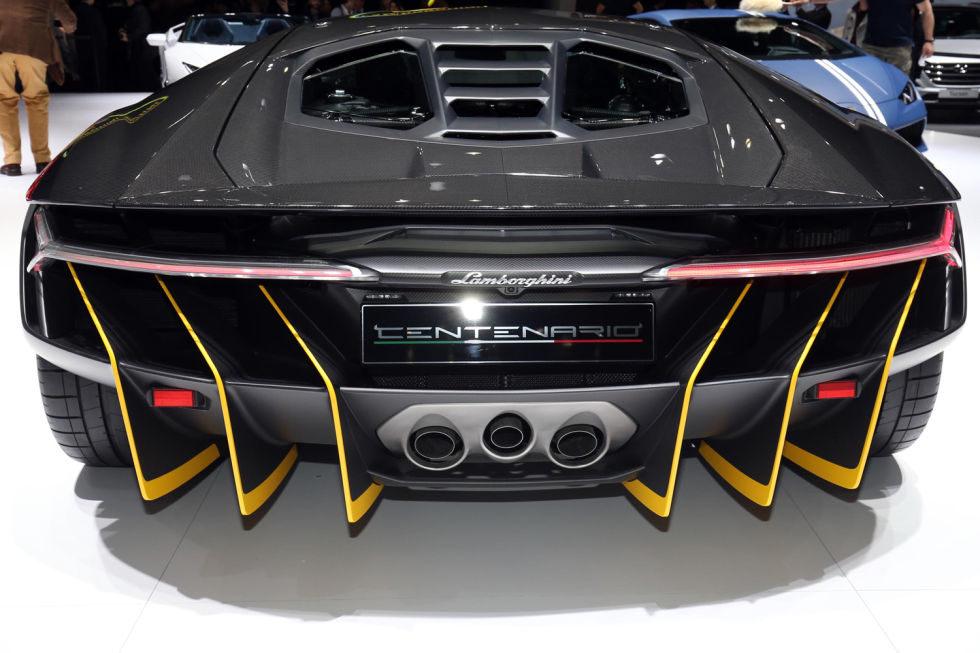 The ridiculous back end of the Lamborghini Centenario

That 9km straight might also prove useful if you aim to max out the Lamborghini Centenario, new from another of VW’s sprawling range of brands, which has been built to celebrate the centenary of company founder Ferruccio Lamborghini’s birth. Based on the V12 Aventador, the new car has a carbon fibre body cutting overall weight to 1520kg, and Lamborghini’s most powerful engine ever, with a naturally aspirated 770ps. It propels the Centenario to 62mph from rest in 2.8sec, and on to 186mph in just 23.5sec. The top speed is said to be over 217mph.

Apart from the aggressive shape, with its irregular-shaped arches, extending rear wing, and enormous multi-finned rear diffuser, the biggest innovation on the Centenario is the adoption of four-wheel steering which counter-steers at low speeds to improve agility, and steers in parallel with the front wheels at high speed at improve stability. The idea isn’t new, but it’s the first time Lamborghini has fitted such a system, one other Lamborghini models are likely to adopt in future. Just 20 coupé Centenarios and 20 roadsters will be built, all of them already sold at a starting price of €1.75 million before tax. 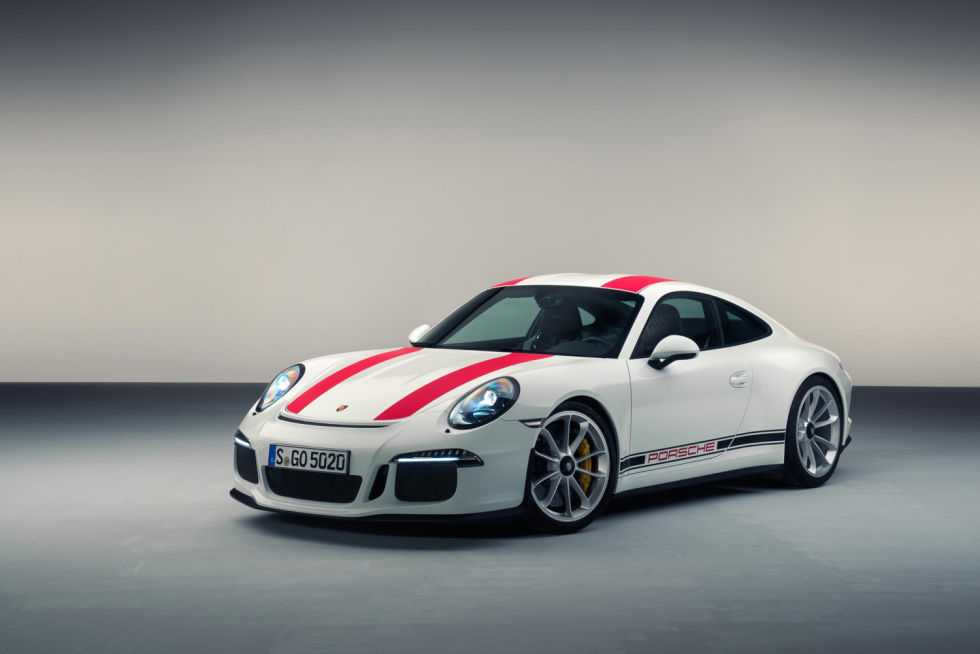 If the Chiron and the Centenario are just too big, too heavy, too flash and, erm, too expensive, then Porsche has the answer on its Geneva stand. The 911 R is a lightweight, normally-aspirated, manual gearbox version of the 991-series, and that noise you can hear is Porsche purists across the globe chorusing “about time too” now that the GT3 and GT3 RS both come with Porsche’s (excellent) PDK dual clutch transmission. The 911 R shares the GT3 RS’s 4.0-litre, 500ps engine and is 50kg lighter than the RS, with weight shaved by a carbon fibre bonnet and front wheel arches, magnesium-alloy roof, plastic rear and side windows, and missing rear seat, air con, and audio systems. It’s a few tenths slower than the RS to 60mph from a standing start—Porsche claims 0-60mph in 3.7sec—but it has a higher maximum of 201mph, no doubt because it doesn’t have to haul a big rear wing through the air like the RS does.