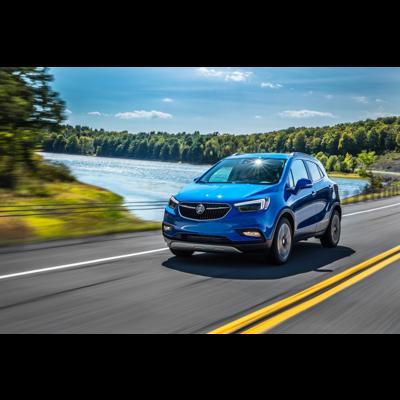 The competition in the compact crossover SUV class is fierce, and it’s where some of my favorite all-around workhorses live. The Toyota RAV4, Honda CR-V, Nissan Rogue and Mazda CX-5 have absorbed most of my attention. Recently, on a trip to Michigan, I found myself in a rare position for an automotive journalist – traveling on my own dime. Rather than attempting to arrange a press vehicle, I decided to behave like an average consumer. I opened my wallet and rented a car at the airport. I chose a 2017 Buick Encore.

Encore is an SUV with European roots, based on the Opel Mokka. Elsewhere in the world, Mokka-based vehicles wear the name Bitter Mokka, Vauxhall Mokka and Holden Trax. Mokka also underlies the Chevrolet Trax, which is sold here in the US. The first Buick Encore models in the United States were sold as 2013 models. Encore is currently Buick’s top-selling model.

Encore has made its way with few major changes since its debut. 2017 sees some cosmetic changes on the exterior, with new front and rear fascia designs, new headlights and taillights with LED signature lighting, a new hood and new front fenders. The interior has also been updated, with higher quality materials, more chrome and contrast stitching.

On the technology side, my rented Buick was equipped with a 4.2-inch color driver information center in the instrument panel, and an 8-inch color touchscreen interface for Buick inteliLiink infotainment. Push-button start and a proximity key are standard, and once you get inside there’s an eight-way power driver’s seat. Apple CarPlay and Android Auto are optional, and were included on my rental. OnStar Guidance was also fitted to the Encore, a $349 annual subscription.

There’s plenty to love about the Encore. Its 1.4-liter turbocharged DOHC inline-4-cylinder engine and 6-speed automatic transmission delivers adequate performance (138 hp and 148 lb-ft of torque), and great fuel economy (25 mpg city/33 mpg highway with front-wheel drive; 23 mpg city/30 mpg highway with all-wheel drive). The interior was genuinely comfortable, and roomier than the crossover’s compact exterior leads you to expect. OnStar Guidance is worth the price of admission – just push a button on the touchscreen or on the rearview mirror, and you’re quickly connected to a live operator who helps you find your destination, and directions are downloaded into your vehicle to provide turn-by-turn instruction. It’s a pretty good system, as long as you stay on the route. Depart from the route, and guidance pauses. You have to re-engage guidance and update to get a new route. It’s a little clunky, but you don’t have to stop the car to get directions, and that’s good.