The executive vice-president of Air Canada says it was safe for flight AC624 from Toronto to Halifax to land in snowy weather early Sunday morning, but the airline doesn’t know what caused the Airbus A320 to crash at Halifax Stanfield International Airport.

Klaus Goersch says all but one of the 23 people taken to hospital following the crash has now been released, including the two pilots. He said the remaining person is expected to be released this afternoon.

Both pilots have worked for Air Canada for about 15 years and have a lot of experience flying A320s, Goersch told reporters Sunday afternoon.

“All of us at Air Canada are greatly relieved that there have been no critical injuries as a result of this incident,” he said.

Passengers on board the flight say the plane hit a power line and electricity to the airport was down for more than hour, however an airport spokesman says he cannot confirm it was related to the crash. Power lines are down on the south side of the airport.

Goersch said determining the cause of the crash will be up to the Transportation Safety Board of Canada. He did say the plane circled some time before trying to land, but added weather was at “approach minimums.”

“The weather was appropriate for landing,” he said.

The crash has been “very unsettling” for passengers and their families, Goersch said, and Air Canada is working hard to meet their needs.​ The airline says there were 133 passengers and five crew on board.

Photos posted by the Transportation Safety Board show the aircraft lying on its belly. The nose is torn from the plane and there’s debris by the wing.

Transportation investigators are on scene and are expected to hold a news conference later today.

The aircraft “took a very hard landing” and skidded off the runway at approximately 12:35 a.m. AT,” said Peter Spurway, a spokesman for the Halifax Stanfield International Airport.

“Right now, we have some minor injuries. Nothing that is deemed to be life threatening,” he said.

A secondary runway is in operation at the airport, so flights have resumed. Changes in flight schedules are expected and the airport is asking people to check with their airline for flight information.

Spurway said some flight changes may not be because of the AC624 incident, but because of weather issues.

Electricity was out at the airport at the time of the incident, and remained off for at least an hour after. Nova Scotia Power, the local utility, tweeted at 2:12 a.m. AT that power had been restored.

“We’re not sure if the two incidents are related,” said Spurway.

Passenger Randy Hall said the plane was circling the airport for at least 30 minutes waiting for a good time to land. As the plane was coming down, there was “a big flash,” he said.

It has been suggested but not confirmed that the plane might have struck a power line or pole.

Passenger Denis Lavoie said he saw sparks coming from the plane and that it bounced twice upon landing.

When the plane landed, the passengers left via the emergency exits. 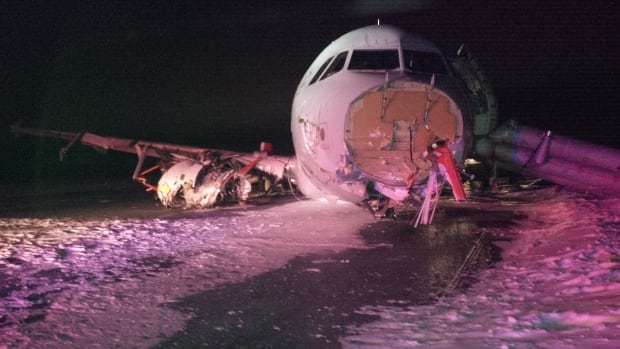 The plane was badly damaged in the crash. (Courtesy Transportation Safety Board of Canada)

“There was a couple people, all bloodied. Everybody was able to get out, but what was worse was that they left us for an hour outside in the blowing snow. I mean, we’re all freezing and we’re looking and going, ‘Why isn’t anybody coming to get us?’” said passenger Lianne Clark.

Once off the plane, the passengers ran away from the plane “because the fuel was coming out and we were scared,” she said.

Passengers were very cold, especially given that some were in shorts because they were coming from southern destinations and some had taken off their shoes while on the plane.

Scott Murray, one of dozens of family members waiting for loved ones on the flight from Toronto, told CBC News his father was on the plane and called to say “that the plane crashed and he’s all right.”

It was snowing heavily at the airport at the time of the incident and Murray said his drive in was just as “nasty.”

“It was a rough ride here. It was pretty nasty. Highways aren’t that great,” he said.

Greg Wright, who was waiting for his 13-year-old son to come off the plane, said he thought his son was joking when he called from the plane.

His son and other passengers were directed to a fire truck, then a bus, and were taken to an airport hangar where they were triaged and checked for injuries, said Wright. His son was not seriously hurt.

Lavoie said the buses picked the passengers up at 1:21 a.m. and showed photos to a CBC reporter to confirm this.

CBC reporters Anjuli Patil and Brett Ruskin are on the scene, tweeting from the airport.