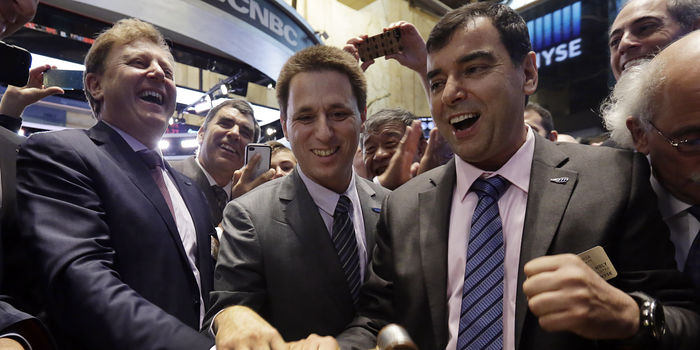 “If you want to create a car technology with mass adoption, it needs to be about safety,” says Amnon Shashua, chairman of Mobileye
MBLY


NV, a fast-growing supplier of assisted-driving technology. “Positioned as a comfort feature or as something that is cool to have, the autonomous car would not make it to the mass market.”

Jerusalem-based Mobileye develops machine-vision chips and software. According to Mr. Shashua, its chips by 2018 will be used on a car that takes over steering if the driver has a heart attack, falls asleep at the wheel or becomes otherwise incapacitated.

He declined to comment on the manufacturer or how its vehicle would monitor the driver’s condition. Mr. Shashua said such technology could be via a smart wristband, or biometric sensors in the seat.

In 2013 there were 543 fatal crashes in the U.S. involving drivers who were ill at the time of the crash, including those suffering from diabetic reactions, seizure, heart attack, high or low blood pressure, and fainting, according to data by the National Center for Statistics and Analysis, an arm of traffic safety regulator National Highway Traffic Safety Administration.

An earlier study found driver incapacitation to be the sole or main cause of 6.4% of 723 crashes sampled. In 4.4% of the crashes, the driver fell asleep and in 2% the driver experienced a seizure, a heart attack or a blackout.

Mr. Shashua said the right message and mission will be important to paving the way for autonomous vehicles. While auto makers developing such cars have noted they would lead to safer roads, some have also said driverless cars would allow human operators to read the paper or answer text messages. “Comfort doesn’t interest the regulator,” he said.

Driverless-car technology faces an uncertain regulatory environment. While development of systems that let cars drive themselves is rapidly evolving, regulators in major automotive markets haven’t yet set full policies to govern public use.

Still, regulators’ embrace of smart safety features like emergency braking before collision and lane-departure alerts has already turned Mobileye into one of the industry’s more influential players. It remains much smaller than auto-supply giants such as Delphi Automotive
DLPH

Researchers at Boston Consulting Group said earlier this year that self-driving cars would be a reality in a decade and a common sight within two decades. BCG estimates the potential market for autonomous vehicles to reach $42 billion by 2025.


, said in a July interview that while autonomous features such as self-braking or lane-keeping alerts will get more sophisticated, the marketing focus will be on the array of benefits, including safety.

“All these technologies will move much faster than the regulator,” Mr. Ghosn said.

“Part of what we’re trying to figure out with all this new technology is: Are there places where innovations are going to run up against federal regulations?” Mr. Rosekind said. “There are so many moving pieces here.”

There are plenty of headaches for regulators to iron out in coming years, and some auto makers have attempted on their own to help sort out the question of who is responsible for the actions of autonomous cars. Daimler AG
DDAIY


’s Mercedes-Benz S-class, for instance, requires drivers to put pressure on the driving wheel when using semiautonomous features. Tesla is installing autopilot technology that requires drivers to activate the turn signal before those features kick in.

Regulators, while not entirely clear on rules, have weighed in. As Google tests its self-driving car in California or Texas, for instance, regulators require that a human driver be present to take immediate control of the car. The U.K. government included similar requirements in its new code of practice for testers of autonomous cars.

Nimrod Kozlovski, a venture capitalist and senior adviser to law firm Herzog Fox & Neeman specializing in technology regulation, said Mobileye’s concern about drivers who are entirely knocked out by a health event raises a fresh challenge. “It is a clear case in which a human is absent, and the technology can save lives.”

Corrections & Amplifications:
Ziv Aviram is the chief executive of Mobileye. A photo caption on an earlier version of this article misspelled his name as Ziv Aviramon. (Aug. 14, 2015)