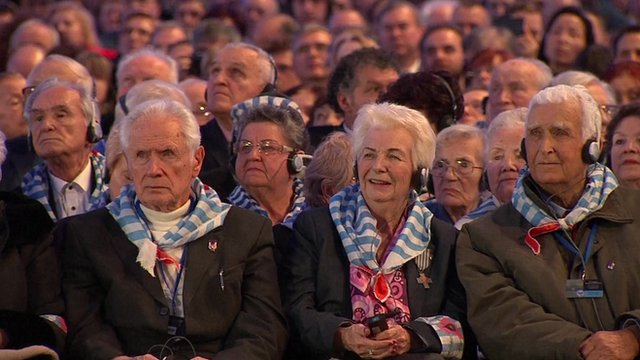 
Auschwitz survivors have urged the world not to allow a repeat of the crimes of the Holocaust as they mark 70 years since the camp’s liberation.

“We survivors do not want our past to be our children’s future,” Roman Kent, born in 1929, told a memorial gathering at the death camp’s site in Poland.

Some 300 Auschwitz survivors returned for the ceremony under a giant tent.

Some 1.1 million people, mostly Jews, were killed there between 1940 and 1945, when Soviet troops liberated it.

Once again young Jewish boys are afraid to wear yarmulkes [skullcaps] on the streets of Paris, Budapest, London and even Berlin”

It is expected to be the last major anniversary event survivors are able to attend in considerable numbers.

Ronald S Lauder, president of the World Jewish Congress, told the commemoration: “Jews are targeted in Europe once again because they are Jews…

“Once again young Jewish boys are afraid to wear yarmulkes [skullcaps] on the streets of Paris, Budapest, London and even Berlin.”

In the Czech capital Prague, speakers of parliament from across the EU gathered with the European Jewish Congress to issue a declaration condemning anti-Semitism and hate crimes. 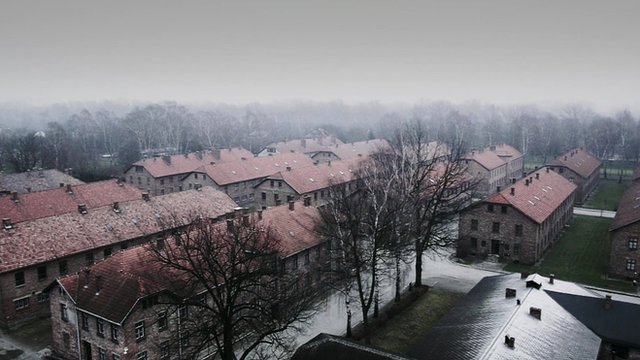 Those who survived Auschwitz lived through one of the 20th Century’s worst acts of hatred and inhumanity. Many of those still alive today were children in 1945 but they are elderly now and this may be the last significant anniversary where so many will gather.

A huge, white temporary building has been erected over the brick railway buildings where many of the Jews of Europe were sorted into those who were fit enough for slave labour and those who would be taken straight to the gas chambers.

Candles have been lit at the Death Wall where prisoners were executed – small points of light in this wintry landscape of snow and ice, where Europe is remembering a time of darkness. 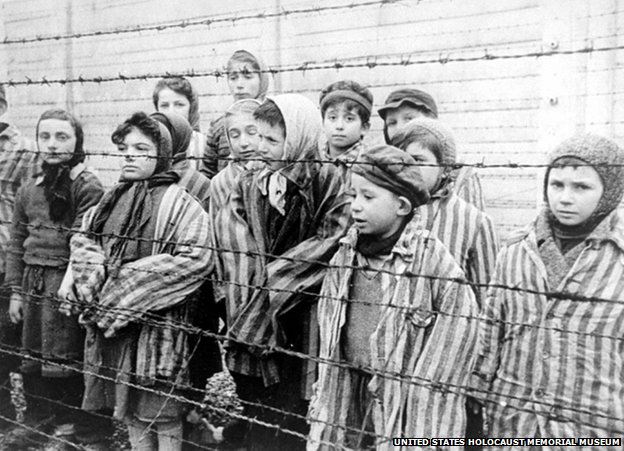 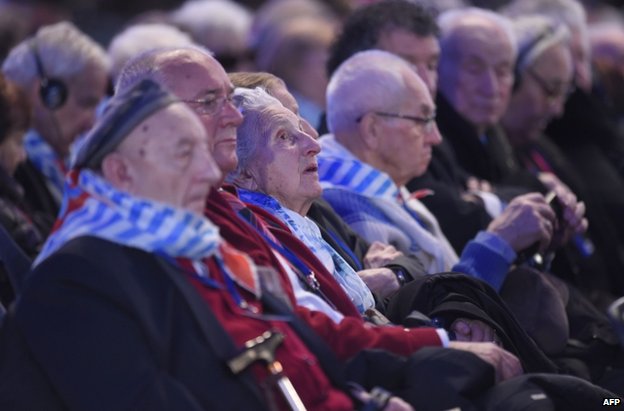 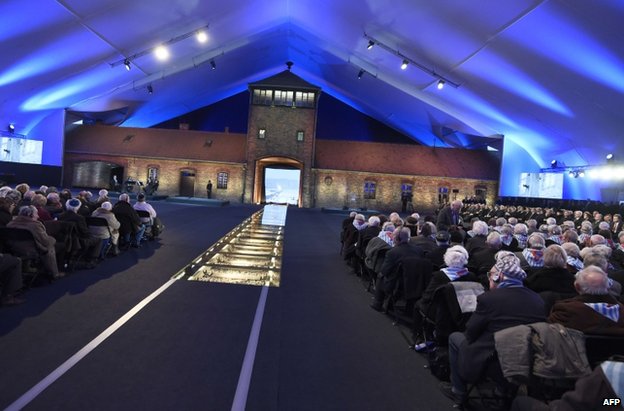 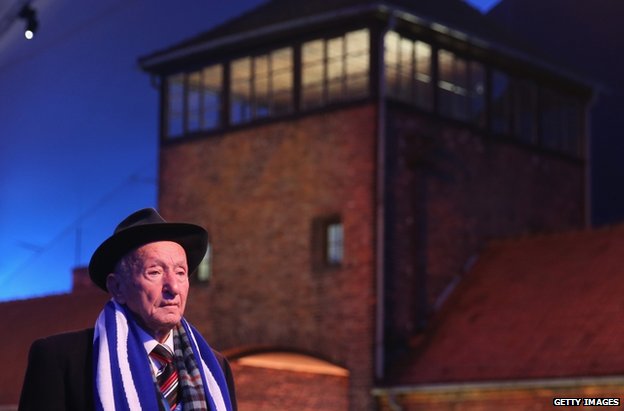 Yuda Widawski, 96, is among the oldest survivors of the Auschwitz attending the ceremonies 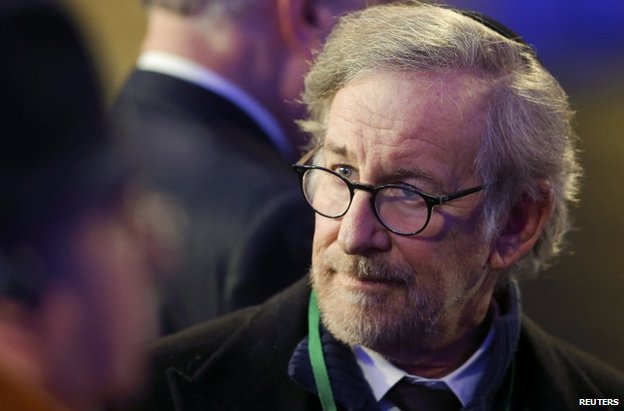 Hollywood director Steven Spielberg, who made the Holocaust film Schindler’s List, was at the ceremony at Auschwitz 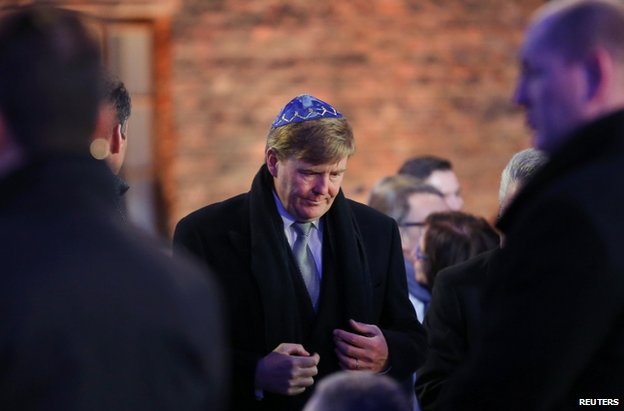 Dutch King Willem Alexander came for the ceremony in Poland 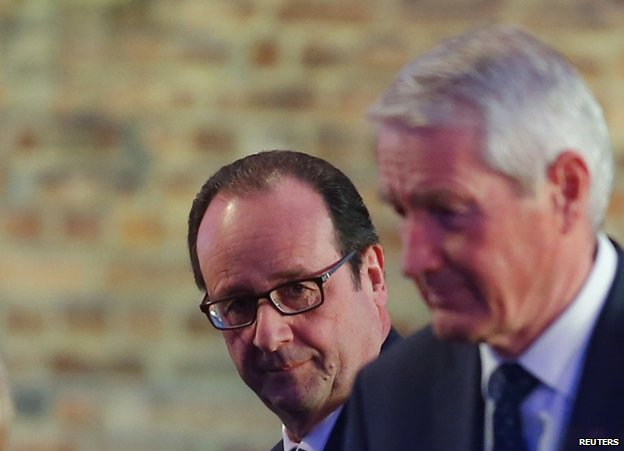 Welcoming the visitors, Polish President Bronislaw Komorowski said the Germans had made Poland a “cemetery for Jews”.

Auschwitz survivor Halina Birenbaum, born in 1929, told the assembly that her greatest duty was to “tell others how much people [in the camps] had wanted to live”.

“I lived my mother’s dream to see the oppressor defeated,” she said, condemning Holocaust denial and warning that anti-Semitism remained a threat.

After the speeches, Jewish and Christian prayers for the dead were said before candles were lit at the Birkenau monument to the victims.

Anniversary ceremonies took place in other parts of Europe and at Israel’s Holocaust museum, Yad Vashem. 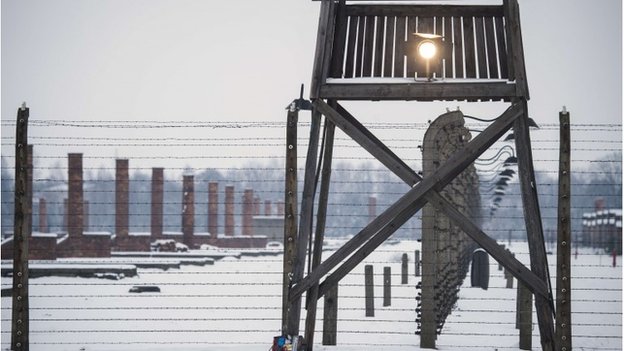 Life in the city of Auschwitz

Renee Salt, 85, from north London, visited the camp for the first time 10 years ago and “buried the ghosts”, she told the BBC, and has been going back ever since.

“I’ll do it for as long as I can. Why? There are still a lot of Holocaust-deniers the world over and if we don’t speak out, the world won’t know what happened.”

Paula Lebovics, an 81-year-old survivor from Encino, California, told the AP News agency that she remembered how as a small, hungry girl of 11 she was lifted up by a Russian soldier who rocked her tenderly in his arms, tears coming to his eyes.

She did not know who that soldier was but she still felt enormous gratitude to him and the other Soviet soldiers, Ms Lebovics said, adding: “They were our liberators.”

On Tuesday the Russian defence ministry published what it said were archive documents (in Russian) about the liberation of Auschwitz. 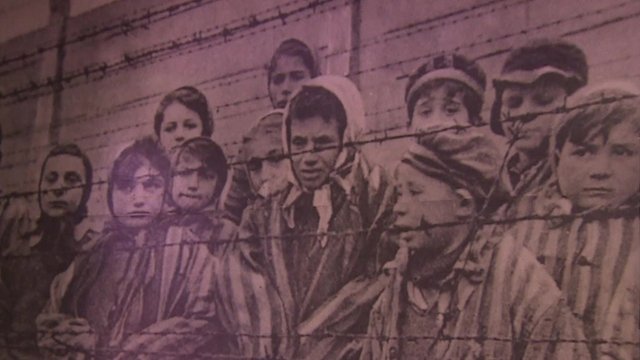 
The BBC’s Fergal Keane: “The human imagination still struggles to comprehend what went on here”


Russian President Vladimir Putin was among world leaders not attending the ceremony amid a row with Poland over the commemoration and linked to Russia’s recent intervention in Ukraine.

Instead, the Russian leader attended a commemoration at Moscow’s Jewish Museum along with Russia’s Chief Rabbi, Berel Lazar. 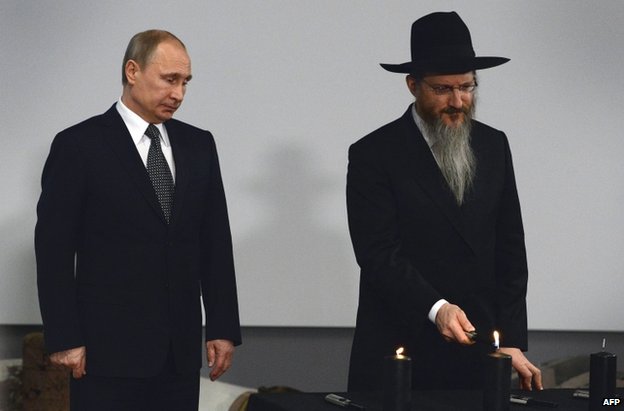 The Kremlin accused Poland of engaging in anti-Russian “hysteria” after Polish Foreign Minister Grzegorz Schetyna credited Ukrainian soldiers, rather than the Soviet army, with liberating Auschwitz.

“The Russian people carried the lion’s share of the fight with fascism on their shoulders – 70% of all the Red Army fighters and officers were Russians,” Mr Putin said at the museum.

He also paid tribute to more than half a million Jews who had fought in the Red Army and made a “huge contribution to the victory against the enemy”.

Before leaving Paris for Poland, French President Francois Hollande condemned the “unbearable” problem of contemporary anti-Semitism, telling Jews at a Holocaust memorial, “France is your homeland.”

Are you related to a survivor or a survivor attending the commemoration? If so, what are your memories? You can share your pictures by emailing haveyoursay@bbc.co.uk.

If you would be happy to speak further to a BBC journalist, please include a contact telephone number.