The concept of using electric vehicles as a grid resource is no longer just theory. A pilot program recently conducted by BMW and Pacific Gas & Electric successfully demonstrated that electric vehicles can serve as reliable and flexible grid assets, which could eventually save money for both utilities and EV owners.

The BMW i ChargeForward Project is one of the best examples to date of a utility and an automaker working together to develop new technologies and use cases for electric vehicles (EVs) and their batteries.

“One of the things that we really wanted to test here was, how can we work closely with an automaker?” said David Almeida, electric vehicle program manager at PG&E. “We are an old company, and we’re a large company. Automakers are old companies, and they’re large companies. We both have our own internal bureaucracies. And so, one of the challenges I wanted to understand when we were setting this up was, how do we make those two independent entities work well together?”

“By and large, we didn’t have any of those institutional challenges that I was [worried about],” he said. “We ended up working very closely, I think partially because we’ve got this common shared goal of increasing electric transportation.”

With the i ChargeForward pilot, BMW was required to provide PG&E with 100 kilowatts of grid resources when called upon, through a combination of delaying charging for nearly 100 BMW i3 vehicles in the San Francisco Bay Area and drawing from a second-life stationary battery system built from reused EV batteries, for the duration of 1 hour. The grid services demonstrated in the pilot included day-ahead and real-time signals that were modeled after existing proxy demand resources from the California Independent System Operator (CAISO), in order to test whether these resources could eventually participate at the wholesale level.

Over the course of 18 months, from July 2015 to December 2016, the i ChargeForward project dispatched 209 demand response events, totaling 19,500 kilowatt-hours, according to a recently released program report.

The events were called using an OpenADR protocol, the agreed-upon pathway for demand response communications. Olivine, an approved scheduling coordinator with CAISO, acted as the interface between the utility and the automaker. Once triggered, BMW’s aggregation software determined how much of the 100-kilowatt load drop would be met by the stationary battery and how much would come from managed charging, and used the onboard vehicle telematics system for communicating grid messages to the cars.

All of the DR events included a mix between the second-life battery and the vehicles, with around 80 percent participation from the battery and 20 percent from the vehicles. However, when the utility called events at different times of the day, specifically when there was a high vehicle load, vehicle participation jumped up significantly, to around 50 percent. 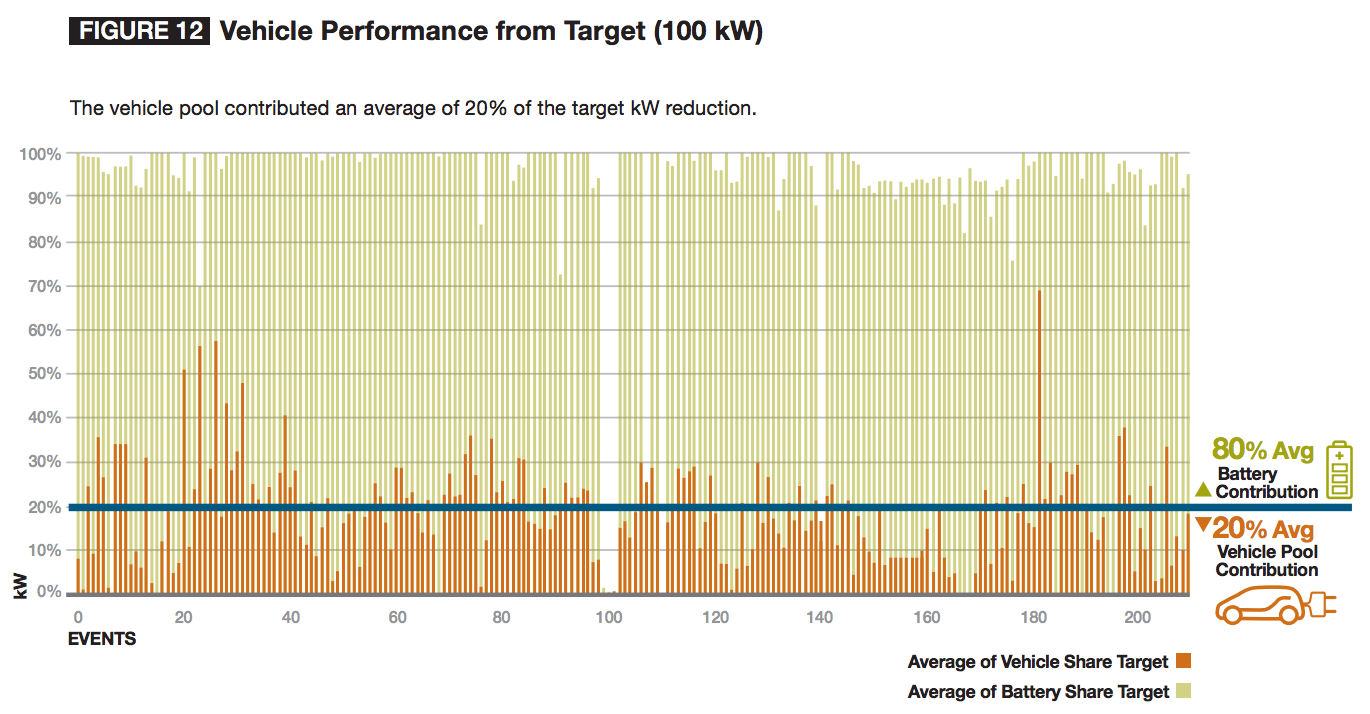 The vehicle response rate was highly correlated with PG&E’s residential time-of-use rates, which offer lower electricity prices at night from 11 p.m. to 2 a.m. Almeida said that a high percentage of EV drivers plugged in their vehicles as soon as they got home, but delayed actual charging until later in the evening when rates declined. This showed that the vehicles have even more flexibility as a grid resource than initially thought, because they’re plugged in for longer periods of time and because customers are effectively responding to the rate structure.

“That gives us an indication that we have some ability to move vehicle charging throughout that window of [plug-in] time,” said Almeida, who will discuss EV infrastructure on a panel next week at Grid Edge World Forum. 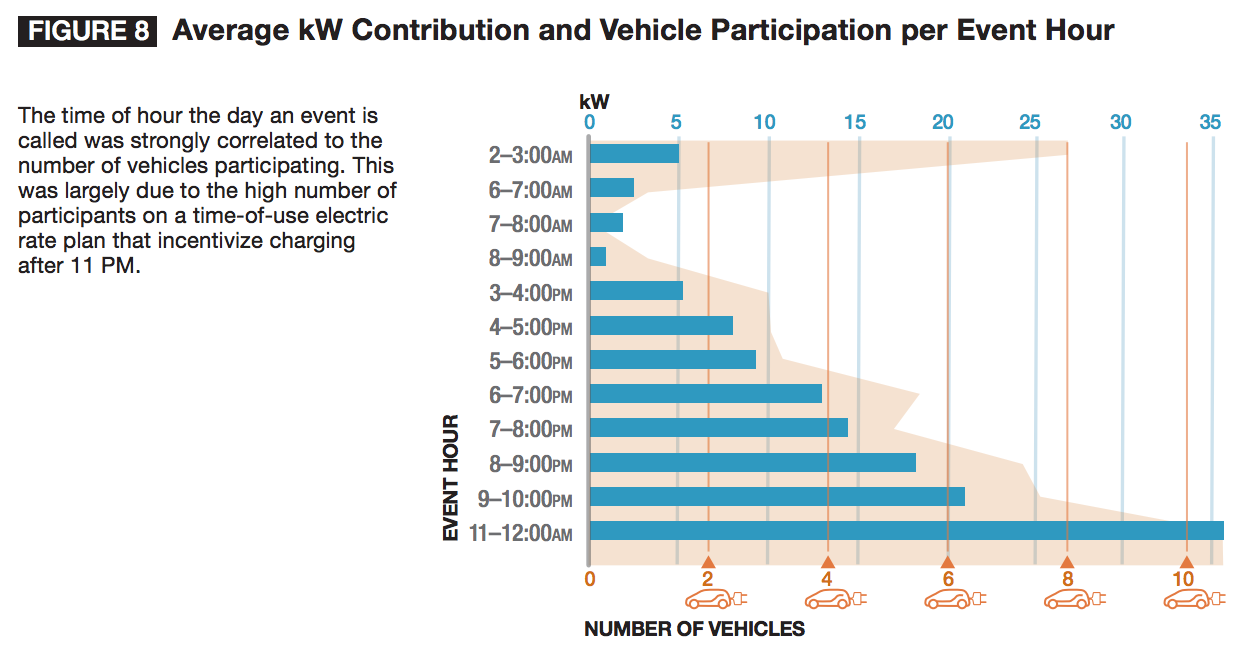 “We also saw there wasn’t really any negative impact,” he said. “For most of these people, this program ran in the background of their lives and they didn’t even notice it.”

Customer research conducted as part of the pilot found that 98 percent of participants were satisfied with the program, and 93 percent said that they would likely participate in a similar program in the future. For BMW, the pilot proved that they could successfully manage the customer relationship in this new setting, and that currently available technology is capable of turning a mobility product into a grid asset.

“We were using production vehicles in our pilot that were owned by real households and that used our production telematics system,” said Adam Langton, energy services manager for BMW North America. “We were able to use that to execute grid event signals from the utility and send them to vehicles and get them to perform. So from our perspective, for demand response events and those types of use cases, vehicles are ready right now and can be a really valuable resource to utilities.”

“The champ of the program”

With only 100 participants in the EV program and participation restricted to home charging, there was a limit to how big of a role EVs could play in each DR event. Despite very few opt-outs, just seven vehicles participated in a given event on average.

In order to supplement smart charging, BMW developed a solar-powered energy storage system made from eight second-life lithium-ion batteries from BMW MINI E demonstration EVs (100 kilowatts/225 kilowatt-hours). A microgrid system was built at BMW’s Mountain View office to coordinate stationary battery charging with an on-site solar array, which provided electricity to the main office building while also ensuring enough charge to participate in the DR events. Almeida called the second-life battery “the champ of the program.” 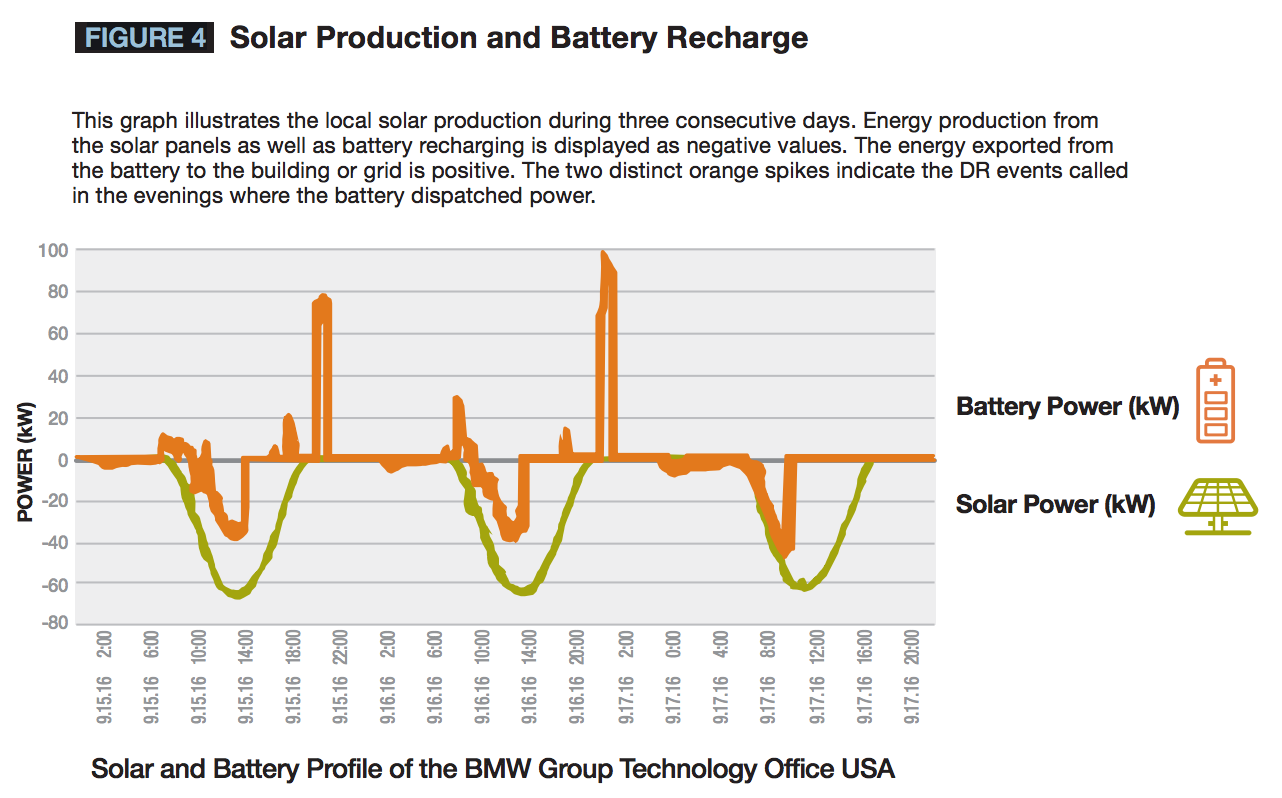 Langton said that BMW was able to assemble the stationary battery with very few modifications. However, the report notes that “several issues” were discovered as the system was being commissioned, and a BMW task force was brought in to resolve them. Following the initial installation, however, the system ran reliably throughout the pilot with only “minor issues.”

These minor issues included a battery cell replacement that took longer than expected, a malfunction with the battery control program and temporary communication errors with the battery control system. There were also communication lags between the DR signal and the vehicles, and there were events where the system failed to meet the required load curtailment. But in each case, the root cause was identified and the error was prevented from happening again.

Also, to simplify the installation of second-life stationary batteries in future, automakers may start to think about how they can design EV batteries from the outset for stationary applications.

BMW is already thinking along these lines. A year ago, the automaker announced it would begin to turn new and used i3 batteries into plug-and-play energy storage solutions for homes and small businesses. These batteries do not require additional software, cooling systems or safety equipment, which significantly reduces the overall product cost. The used batteries can also be scaled into much larger grid resources, like the stationary battery in the i ChargeForward Program, an area which BMW plans to continue to explore.

“The higher cost of an EV compared to a traditional internal combustion engine (ICE) vehicle is widely considered the major obstacle toward mass market EV adoption,” the pilot report states. “The strategy of this pilot was to develop a mechanism that partially or fully levels the higher costs of EVs compared to internal combustion vehicles. The project aims to accomplish this goal by bundling the grid value of an EV’s demand response capability over the vehicle’s useful life and beyond (as a battery second-life stationary grid storage asset). This value is paid to the EV manufacturer, who then passes on this value to the driver.”

If revenue from grid services can help offset the cost of an EV, it could incentivize more EV purchases — a win for auto manufacturers. For the utility, smart charging could play a significant and perhaps essential role in stabilizing the grid as more EVs and more intermittent renewable energy resources come on-line. PG&E forecasts it will have 1.2 million EVs in its service territory by 2030. Managing how those electric vehicles pull power off the grid can help the utility cope with electricity use spikes in the evening and over-generation of renewables, especially solar, during the middle of the day.

Smart charging programs also enhance the relationship between the automaker, the utility and their customers, which could pave the way for additional programs and interactions.

“The program demonstrated that automakers could serve as a trusted partner to drivers in programs like this,” said Langton. “Having the automaker involved in a program like this, we’re able to get greater participation levels from customers, which means more grid value to the utility.”

“This is a new concept [and] customers are apprehensive about new things like this, because they worry about how it will impact the vehicle that they spent a lot of money on, and how it could impact their morning commute and their mobility,” he added. “Having BMW in their corner on this program gave them more confidence to participate, because they trusted us to protect their vehicle and make sure that they could meet their mobility needs.”

Phase 2 takes the show on the road

Based on the success of the i ChargeForward pilot, BMW received a grant from the California Energy Commission to continue with a second phase of the pilot.

“The second phase of the pilot will explore two primary themes: testing advanced smart-charging use cases that promise additional value to the grid, and evaluating customer engagement strategies that incentivize drivers to provide additional flexibility in their charging behavior,” the report states. With the new grant, BMW will work with PG&E to explore how charging can be moved throughout the day and to different geographic areas.

“We asked ourselves, ‘What if we use mobility as a strength of a vehicle grid resource?’ The fact that it moves means it appears on different parts of the grid, which means that you can manage it across time, which we’re already able to do…and across different geographic locations,” said Langton. “This could be potentially valuable to utilities as they get more and more solar energy, and it’s producing a lot more generation during the day. […] If we have the ability to manage charging across different locations, we can take some of that nighttime charging and move it to the daytime hours where a utility needs it.” 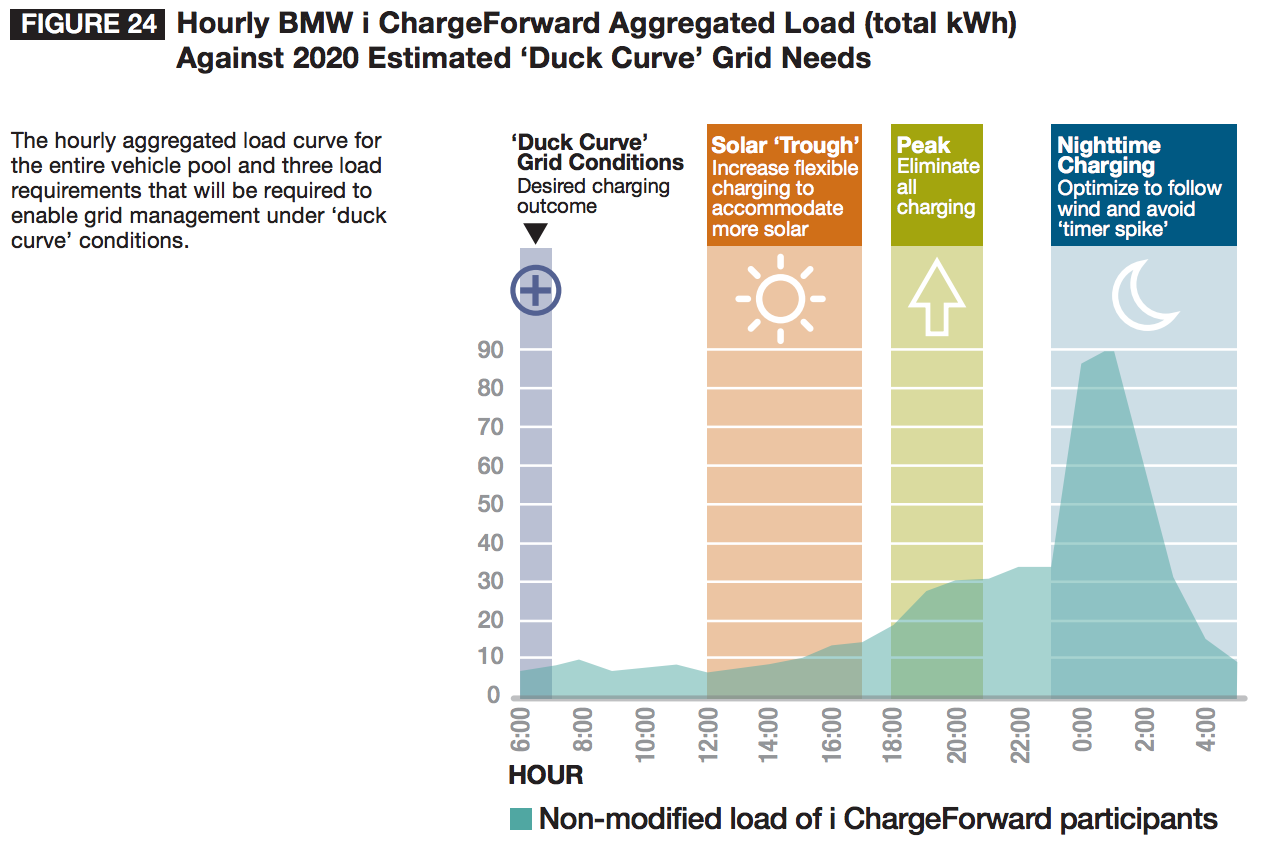 In 2017 and 2018, BMW will work with a pool of over 250 vehicles, including i3 and i8 EVs, to explore the grid benefits of increasing charging flexibility, as well as customer engagement. BMW will also be looking for additional utilities and new programs to accommodate smart charging and second-life batteries as a grid resource.

From PG&E’s perspective, the EV advanced charge management testing has been a success so far.

“The cool thing about it is there’s a win-win. You’ve got a win for the customers, because they’re going to get a value off of [these grid services]. […] Then there’s a win for the utility, because we’re better managing the grid, which is becoming increasingly important as the grid is changing,” he said.

“I think there’s an additional win too, because this helps to support these larger policy goals of not just decarbonizing transportation, but decarbonizing the grid,” Almeida added. “If you have a more flexible resource, then you’re able to allow for more renewable generation moving forward. So it’s a win-win-win.”