$53.45
Home › Blog › Autos › BMW have turned the family saloon into a real monster and driving the 4 series is a joy whatever engine you choose – The Sun

IT’S a bad time to be an animal, especially one not too quick on its feet.

Don’t know about you, but everywhere I drive I see roadkill.

In spring, Britain’s A and B roads turn into a gruesome buffet of splattered rabbits, pheasants, foxes, deer and badgers.

I think Peta (People for the Ethical Treatment of Animals) should spend its money on Green Cross Code lessons for these suicidal critters instead of red paint to chuck over rich idiots who wear mink underpants.

This time of year, when the Animals of Farthing Wood seem to enjoy playing chicken with haulage trucks, is a great time to have a four-wheel-drive car.

No one wants to come home with road meat wedged in their grill, especially if it was alive before you hit it.

But playing dodge with bloodied lumps of feather and beak is an exercise in precision driving.

That’s why I was glad to be in an xDrive 420d on the BMW 4 Series launch this week.

Any xDrive-badged Beamer is full-on AWD — it’s BMW’s answer to Audi Quattro, and it turns a family saloon into a grip monster.

And, like Audi’s system, it’s rather clever in that it doesn’t split power evenly between all four wheels, which can render cars slower and less fuel-efficient.

It gives a 60/40 ratio split to the rear wheels — but it spreads grip evenly when the computer detects any loss of traction.

So it still has the sprint and agility of a rear-wheel-drive car, yet doesn’t lose its head when you spot Bambi at 70mph and give the steering wheel an aggressive flick to avoid a grisly ending for the harmless creature . . .  and your front grill.

Not that the pure rear-wheel-drive 4 Series is a slip ’n’ slide ride — far from it.

But when you start bullying it hard in second-gear corners, or get greedy with the gas too early out of an apex, the traction control light starts flashing like an old man in a rain mac.

If you want uncompromised sure-footedness, xDrive is the puppy for you.

The 4 Series is a true success story for BMW.

And the UK is its second biggest fan, after the US.

From the outside, not that much.

Most significant are the sexy-looking LED lights, which are now standard across the range, and an expensive optional extra from most other brands.

The bumpers have gone under the scalpel, too.

But most of the work has happened beneath the skin.

It has new shocks and retuned dampers, making all models more stable and precise.

The cabin is now crowned with BMW’s sixth-generation sat nav — something it’s very proud of.

Not only is the layout on the glossy 6.5-inch screen customisable, but the voice command works like a dream — and it comes with a system that talks to other BMWs on the road.

So if one a few miles ahead of you encounters some black ice, or changes in the weather, it will warn you where it is.

Driving it is a joy, whatever engine you choose.

The lower-powered 420d doesn’t feel low-powered at all, but if you want some wallop you can always spring for the 435d or 440i. These fly.

And if you get the xDrive, you can tell the charity muggers on the high street that you’re already doing your bit for animal rights.


Hydro power given sense of clarity

IN terms of what we drive, things could look very different in the year 2020.

Volvo promises its cars will be so safe no one will be killed or seriously injured in one.

Nissan reckons it will have a car which can drive itself around a city.

And Honda will be readying to sell us a hydrogen-powered vehicle.

Honda has been dabbling with hydrogen fuel cell vehicles since 1998.

But the Clarity is the result of years of testing and refining.

It will go on sale in Japan and California soon, but Europe will have to wait until it has been thoroughly tested before we get a version.

You simply fill the Clarity’s two extremely hardy on-board tanks with 141 litres of hydrogen from a fuelling station.

The hydrogen is then passed through a fuel cell stack which creates an electric current to power motors and charge on-board batteries.

It’s similar to a typical electric car, except it takes minutes to top up and emits nothing but water vapour from the tailpipes.

This also means the Clarity has the longest driving range of any zero emissions vehicle – a staggering 435 miles.

Driving the Clarity is exceptionally refined.

It’s quiet, power delivery is smooth and linear, and there’s plenty of space inside for five adults.
The Toyota Mirai, its closest rival, feels nowhere near as premium.

And Swampy will be over the moon with the interior – it’s decked out in a wood-effect dash made from recycled plastic, and a plant-derived suede substitute swathes the seats.

The biggest drawback is the lack of hydrogen fuelling stations here in the UK.

We have around six open to the public, while Japan has 90.

But the network in Europe is rapidly expanding and Honda hope we’ll soon be able to create hydrogen from green energy.

Now that’s definitely a reason to get excited about the future.

FANCY yourself as a bit of a bike racer, but no money to burn?

Then DirtQuake is the place for you.

It is “an alternative motorcycling festival” for bike fans, dirt racers, grease monkeys and speed freaks, among others.

The fun happens on July 8 and 9 at the Adrian Flux Arena in King’s Lynn, Norfolk.

You can find out more and get hold of tickets at dirtquake.tv.

Highlights from the festival will be shown on ITV4 on July 12. 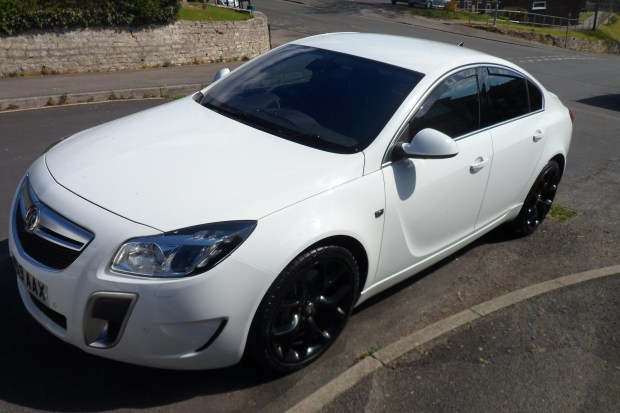 VAUXHALL has been in the business news a lot recently but let’s not forget the firm makes some great cars – like this one, sent in by Ollie Larcombe from Lyme Regis in Dorset.

Ollie says: “I have always been a fan of quick Vauxhalls.

“This is my fully loaded Insignia VXR Nav. Dyno-tested at 350hp, a limited-slip diff and 4wd, it puts a stupid grin on my face every time I drive it. I get the same buzz as I used to get as a self-confessed boy racer back in the Eighties.”

To see your car here, send a pic and a brief description to features@the-sun.co.uk.