BMW i3: driving the electric rebel in Munich’s stable – The Verge 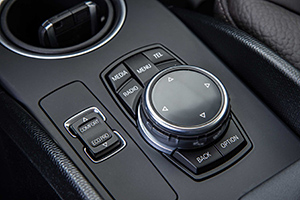 BMW’s bog-standard iDrive is present and accounted for

Once you open the door, you’re greeted with a few more subtle hints that the i3 is, in fact, a BMW: for instance, the door frame shows exposed carbon fiber, a nod to the car’s all-carbon skeleton. 15 years ago, carbon fiber was the exclusive domain of racing teams — but BMW’s been working to perfect the manufacturing methods needed to mass produce it since then, gradually bringing it in small doses to more production cars like the last-generation M6 and M3. In the i3’s case, an enormous amount of carbon is used, more than any other BMW currently on the road, in an effort to reduce weight and extend range. It tips the scale around 2,700 pounds; by contrast, the more conventionally constructed Nissan Leaf weighs 3,300.

The i3 also employs BMW’s bog-standard iDrive system mounted between the front seats. In its current incarnation, iDrive consists of a jog dial that can be twisted, pushed in cardinal directions, pressed downward, or drawn on — the entire top of the dial is a touchpad that can be used to enter characters for finding navigation destinations. I found the character recognition to be practically useless, particularly at speed when it’s difficult to keep your finger from bouncing around, but twisting the dial to select letters is easy enough anyway. iDrive has never fully recovered from the terrible reputation it developed when it debuted on the last-generation 7-Series over a decade ago, but don’t fear it: it’s actually quite good in an auto industry still dominated by mediocre, fussy electronics. If you’ve tried to use the byzantine navigation system in a Chevy Volt, it’s night and day.

On the i3, iDrive is paired to an 8.8-inch display (if you select the Technology Package option, which I imagine most i3 buyers will) that serves as the interface for practically all of the car’s controls. It’s bright, attractive, and readable in the relentless desert sun where I tested it. It’s the centerpiece of a really unusual interior, which diverges strongly from traditional BMWs — from the driver’s perspective, the display appears to float above a flowing bamboo veneer, complete with a storage area to dump your phone and sunglasses. I suspect BMW’s goal here was to appeal to a different demographic than a 3-Series buyer; the list of differences between these two cars’ design elements is far longer than the list of similarities. Both are attractive and modern, but nothing alike.

On the road, I might describe the i3 as the yang to Tesla’s yin. Both cars ooze luxury and quality, but mashing the i3’s “gas” pedal doesn’t melt your face the same way a Model S Performance Plus will. This compact, curvy, BMW-of-the-future feels like a family hauler — a well-constructed family hauler, mind you, but a family hauler nonetheless. It doesn’t really fit with BMW’s long-running English tagline, “The Ultimate Driving Machine.” The car feels efficient and utilitarian, but I was never really overtaken with a desire to hit a highway or a curvy stretch of road the same way I might be in a 335i or an M5. I never felt like I was riding some meticulously crafted wave of driving perfection out into the desert.