The latest 7-Series, due to land in showrooms in October, arrives as the car industry faces a historic transformation. Tough restrictions on emissions are forcing car makers to reduce weight and develop electric and hybrid vehicles.

Traditional car manufacturers, which have ruled the industry for more than a century, face new competition from startups like Tesla Motors Inc.
TSLA


are edging in to the business, threatening to usurp profits from car-generated data and potentially bringing their own driverless technology and cars to market.


and Mercedes-Benz—is to maintain their technology lead even as the race shifts away from the gearbox to information technology. The 7-series is the BMW’s clearest statement yet of how it sees the future of driving. 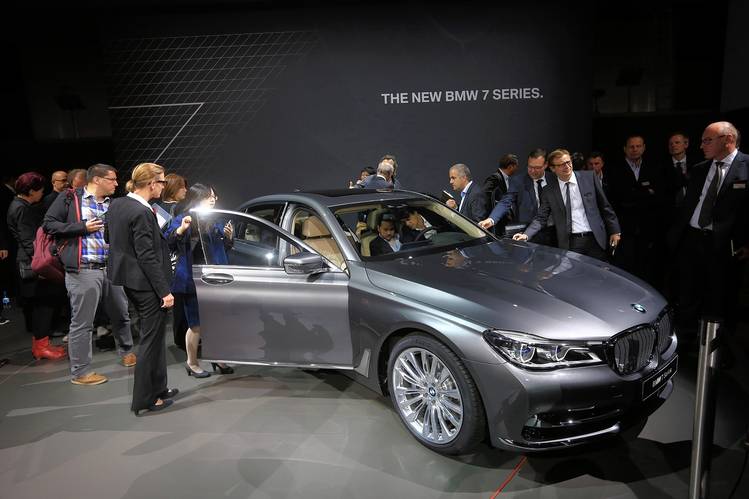 “We are responding to the digitization of modern mobility,” said Chief Executive Harald Krüger at the model’s launch on Wednesday. “This vehicle has everything that BMW currently has to offer.”

Even potential rivals say the country’s auto makers have a prized position in the coming autonomous-car era. “Every German car will eventually be driven by a computer,” Google CEO Eric Schmidt told a Berlin conference on Wednesday. “Germany can lead the world in this.”

The car comes in standard length and a long-wheelbase version for customers who prefer to be driven by a chauffeur. Its body incorporates carbon-fiber reinforced plastic to reduce weight. The lightweight material was first developed for BMW’s niche i3 and i8 electric vehicles and is being integrated in its mainstream cars to help lower emissions.

BMW will offer a plug-in hybrid version, the 740e, adapting a twinned combustion engine and electric powertrain developed for the i8 sports car that will go up to 112 miles on a gallon of gasoline.

The car’s tech tour de force is a remote control with an LED display. It allows the driver to exit the car and, by pressing a command, have the car park itself into a tight parking space or garage.

This remote-parking feature is just the beginning of what is coming down the road. German automotive supplier Bosch GmbH has developed a valet parking system that will enable a car not only to slip into a parking space but actually drive around the parking garage and find a space and later come and pick up the driver.


, which owns rival Mercedes-Benz, this week said it has formed a pilot project with Bosch to develop the valet parking system.

The new BMW sedan comes with a color head-up display that projects information onto the windshield with 75% more display area than in previous models. BMW’s iDrive infotainment center has its own app store and features a touch screen display.

New features include gesture control that allows the driver to accept or reject incoming phone calls or adjust the volume on the radio with a wave of the hand.

‘How intelligent my car is will become increasingly important…’

BMW coming 7-series also will offer a package of driver-assistance features that include semi-automated steering and lane control at speeds of up to 130 miles an hour.

BMW’s emphasis on information technology in the new 7-series is a nod to how important such features are becoming to consumers. Surveys show that as many as one in five of new car buyers would switch brands if a rival brand offered a better connectivity package.

“The intelligence of the car is totally new,” said Christian Malorny, a connected car consultant with McKinsey & Co. “How intelligent my car is will become increasingly important to car buyers.”

—Amir Mizroch contributed to this article.