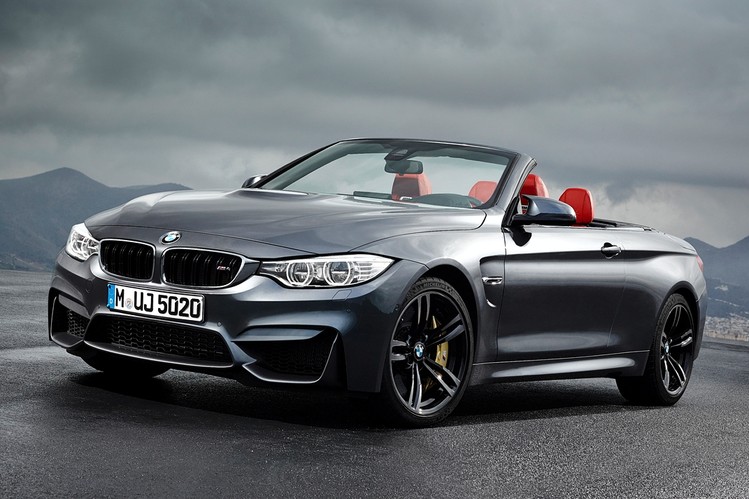 IT WAS RAINING and cold the week I had the BMW M4 Convertible. I barely drove the thing. I couldn’t take photos because the weather was so naff and horrible. That’s too bad, because on the rare occasion the sun broke through, the cornflower blue of our test car (Yas Marina Blue Metallic, the company calls it) was aphrodisiacal, the stuff of broken marriage vows. Honey, give me one more chance. I promise not to buy any more blue cars.

Because of the weather, I spent more than the usual time brooding over the four-seat, compact convertible’s Monroney label. With the optional Executive Package ($3,500, including the heated steering wheel and forced-air “neck warmer”), the carbon ceramic brakes ($8,150), adaptive suspension ($1,000) and some blue paint and rims, our test car hit the register costing $88,725.

It seems like a nice place and yet, at that price, I could feel myself bouncing off the atmosphere of Planet BMW. And that’s even though I know the same car in Germany costs on the order of 30% more.

Outside the window, sitting in the rain, was a whole lot of automobile, from its gold-anodized front-brake calipers to its torque-vectoring rear diff. Mine was upholstered in fine-grain beige leather, over black, with carbon-fiber trim, materials that interfold gracefully around the cabin, defining the gunwales of the BMW’s open boat, so to speak, when the top is hidden away. 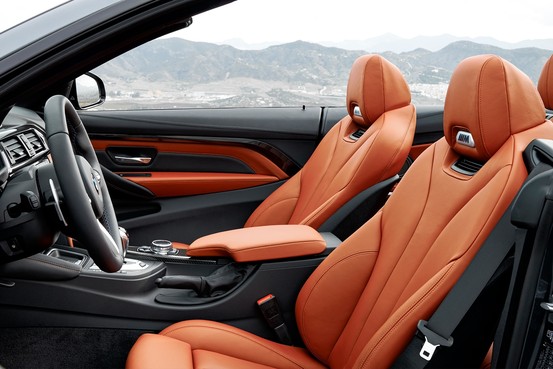 The helm position is a model of ergonomic wisdom, including the latest and most lucid generation of the iDrive controller, through which so much of the BMW experience is accessed. The M package has 10-way power sport seats; other M’ness includes the M gearshift, steering wheel, illuminated sill plates and drilled aluminum footrest.

And it certainly weighed like a lot of automobile: 4,055 pounds, which is an unbelievable 525 pounds more than the M4 Coupé. A quarter-ton? Who knew air weighed so much?

Of course, any contemplation of the M4’s retail price must confront the abyss of depreciation that awaits it. Oh, yes, I absolutely went there. This car’s immediate predecessor, five years ago, was the M3 Convertible—4.4-liter V-8, six-speed manual transmission, limited-slip rear differential. A Bavarian baller, absolutely death row. A well-equipped version would have been driven off the lot for about $75,000. Today, you can buy it for $40,000, and it is still way more car than most can handle.

I certainly don’t mean to compare the residual value of high-performance, low-volume Germany factory tuners—your Audi RS 4s, your Mercedes-Benz CL65 AMGs, Porsche Cayenne Turbos and the M4s—with the Hindenburg, because that would be tasteless. Another exploding gas ball plunging out the sky, yes, of course, fair play. But not the Hindenburg.

Actually, I see nothing amiss here. High-performance cars are luxury toys, beyond folly. I have no problem with impulse-prone rich idiots taking the haircut at the retail level so that others may save on the secondary market.

Now then, if one can get lightly used examples of high-performance automobiles at immense savings, why wouldn’t one? It’s that “lightly used” thing. Until proven otherwise, you have to assume cars like these on the secondary market have been abused at the hands of unindicted former owners. Here’s a tip: If a car has been breathed on in any way—aftermarket exhaust, cold-air induction, exotic wheels, even an air freshener—you can figure at one point it’s been driven through a cornfield.

But, did you catch it? The “neck warmer” system? You can tell a German named it. So very on point. This system breathes warm air out of vents built into the front seats and down the occupants’ collars in a way that I found a little pushy, frankly. Mr. BMW! We just met. What about your lease manager?

Anyway, this system actually does enlarge the day-to-day usability of BMW’s trick-top hot rod, and it is of a piece with luxury auto makers’ efforts to develop a comfortable environmental bubble behind the windshield. In the M4 these measures include: heated and cooled front seats, heated steering wheel, convertible-mode audio and climate control and various kinds of deflectors and aero appliances to direct laminar flow around the open cockpit. The M4’s side mirrors are rigged out on foil-like pylons that divert airflow around the car.

It was nigh about 40 degrees and gray when I struck the M4’s three-piece retractable aluminum hardtop—itself a delightful, nearly silent enterprise of magical self-folding and then, poof, it’s gone. I also rolled down all the windows because if you don’t, I hate to be the one to inform you, people think you are retired.

In other words, I wasn’t making the car’s job of keeping me comfortable easy. But with the neck warmer turned up high, and thanks to what I trust BMW refers to the “Arsch Heizung,” the heated seats, I was toasty even at highway speeds.

‘With the neck warmer turned up high, and thanks to the heated seats, I was toasty even at highway speeds.’

You would think being able to use your monstrously expensive German convertible en plein air, more days of the year, would be an unalloyed good. Amortization, etc. But it does have bit of an unintended consequence in that your fellow motorists think you have lost your mind. Oh, dear, look at that poor, delusional man riding around with the top down. It must be a Silver Alert.

In light of BMW’s shuffled nomenclature, wherein coupes and convertibles are even numbered, this car starts life as a mild-mannered 435i. Then come the ministrations of the M division, starting with an insane state of tune for the 3.0-liter twin-turbocharged in-line six that wrings out an additional 125 hp more than the 435i. This is a dazzling, deliriously revvy bit of reciprocation: Twin single-scroll turbochargers, direct injection, and highly variable valve timing that all collaborate to produce amazing volumetric efficiency across the entirety of the rev range.

For power transfer, the M4 offers a digitally managed seven-speed, dual-clutch transmission, a gearbox that puts the cog in cogito. Or—get them while they last, the thylacine of gearboxes—a six-speed manual transmission, with a clutch pedal and everything. The clutch-enabled six-speeder is a joy to yank around. The powertrain controllers also provide discreet, automatic rev-matching on downshifts, to make you feel like a driving genius.

Punch it in any of the first three ratios and the M4 leaps at the space ahead with almost no turbo lag, but only after a fleeting, somewhat graceless moment of elasticity (known hilariously in engineering as vehicle “squat”). I guess we know where the quarter-ton was hiding.

But the chassis sorts itself out and then it’s off to see the magistrate, if you’re not careful. The M4 accelerates to 60 mph in 4.4 seconds with the manual transmission; with the dual clutch, 4.2 seconds.

Make no mistake: the M4 compromises raw M performance for open-air awesomeness. For example, the coupe version of this car is 0.3 seconds quicker to 60 mph, and the convertible’s extra poundage doesn’t do the handling any good, either.

But what the closed car cannot provide is the adventure of open-air motoring in cold weather, sweeping down a country road barrel-vaulted with autumn leaves, past stroboscopic fields of winter wheat. BMW has just made the adventure a bit less hypothermic.