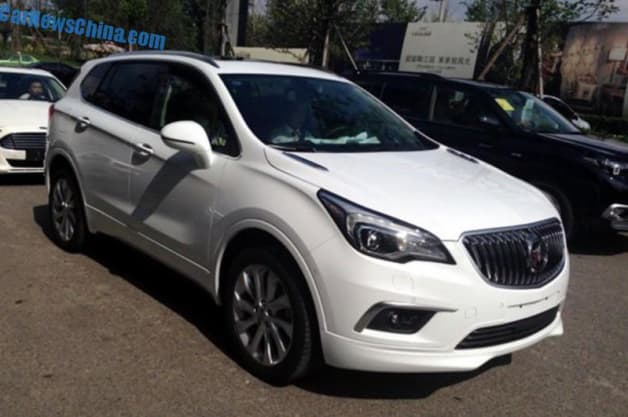 The Buick Envision crossover is supposed to have its big reveal on August 28 and be on display at the Chengdu Motor Show, but apparently the new midsize crossover just can’t wait to meet its public. Car News China caught a completely undisguised example parking outside of the convention center where the show is held.

The Buick designers are going right down the middle with the styling with nothing too flashy to turn off potential buyers. Still, it’s a handsome CUV that kind of looks like a stretched Encore from some angles with vents along the hood, a large greenhouse and a prominent crease running down the side.

This new midsizer is hitting the Chinese market first and reportedly rides on GM’s Delta platform that’s also found underneath the Buick Verano. According to Car News China, prices there are between 160,000 yuan and 220,000 yuan ($26,000 – $35,800 at current rates). However, it’s also rumored to eventually make its way across the Pacific to give Buick buyers in the US an option between the Encore compact crossover and larger Enclave.

Buick has already let a lot of the details slip about its newest Chinese model, including its interior with premium features like a heated, leather steering wheel and Bose noise cancelation. Power comes from two tunes of a 2.0-liter turbocharged four-cylinder engine with either 256 horsepower and 260 pound-feet or 200 hp and 207 lb-ft. Both get a six-speed automatic. We should know more about the brand’s latest crossover when it fully debuts in Chengdu.