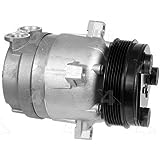 Buick Finds Its Lane In Powering GM Through Difficulties – Forbes

Those humble new TV ads for Buick about taking a “fresh look” at the brand and its vehicles may be the most effective advertising Buick has done in years.

And coincidence or not, Buick’s hot U.S. sales through April indicate that car buyers indeed are taking another gander at GM’s most disrespected brand – and demonstrate that maybe Buick has a lot more juice than assumed. The company also is relying heavily on Buick to expand its foothold in China.

So far, in fact, Buick’s relative U.S. sales performance compared with 2013 is the best of any GM brand even though Chevrolet and Cadillac have received most of the new products lately and GMC benefits from having the Sierra pickup truck. Buick is providing a welcome boost as GM tries to power through its recall-related difficulties.

Last year, Buick’s U.S. sales were more than 205,000 vehicles, a 13-percent increase from 2012 and its best total in the United States since 2006. This year, Buick sales through April were 11 percent ahead of a year earlier, while GMC sales advanced by 3 percent, Chevrolet sales were off by more than 1 percent, and Cadillac sales fell by more than 4 percent.

And in April, Buick’s hot hand was reflected in a 12-percent increase, second in percentage terms only to GMC’s 13-percent gain, and once again beating Cadillac and Chevrolet.

Certainly the ads help. They depict people overlooking one of the striking new Buicks because they simply don’t expect a Buick to look that good. “I didn’t see a Buick”; “That’s not a Buick”; “It sure doesn’t look like a Buick” – those are among the responses of people in the ad when they’re told they’re actually seeing a Buick, or they’re looking for one.

It’s an effective pitch because relative invisibility has been the historical reputation of Buicks, one the brand and GM have been chipping away at for years. But the positioning only works well because today’s Buick lineup — up-to-date LaCrosse and Regal full-size sedans, the new Verano compact sedan, the Enclave full-size SUV and the new Encore mini-crossover — is radically better than its predecessors. “Take a fresh look at Buick – it just might surprise you,” the ad justifiably concludes.

On the product side, the biggest key to Buick’s surprising strength seems to be GM’s wise decision in introducing Encore  early last year, just as sales in the compact-SUV segment – especially in the luxury market where Buick wants to play – were skyrocketing. Encore matches amenities offered in mini-crossovers sold by premium brands and yet offers a starting price of only about $24,000.

Last year, Encore already accounted for about 1 in 6 Buick deliveries. And this April, Encore deliveries rose by 48 percent in April over a year earlier.

But Buick’s other nameplates are chipping in as well. Regal sales rose by 21 percent in April, and LaCrosse sales rose by 10 percent.

Abroad, Buick is performing even better, especially in China, where it was the vanguard for General Motors General Motors. Buick posted a 14-percent sales increase globally in the first quarter, selling nearly 300,000 units worldwide.