$21.15
Home › Blog › Autos › Chevrolet Bolt EV Review: At 200+ miles with juice to spare, this is the affordable electric car to beat – GeekWire

Chevrolet Bolt EV Review: At 200+ miles with juice to spare, this is the affordable electric car to beat – GeekWire

For years I have been waiting for automakers to come out with an all-electric car that can travel over 200 miles on a charge and costs less than $40,000. While a handful of cars have met one of my two criteria, it was only this year that a car hit the market that checked both of those boxes. The 2017 Chevrolet Bolt EV starts at $37,495 and has an EPA-estimated range of 238 miles per charge.

With my old reliable 2001 Saturn SL2 pushing well past 200,000 miles, I was definitely intrigued by the Bolt EV when Chevrolet first announced it last year. The catch (because there’s always a catch): The Bolt EV was initially sold in late 2016 only in California and Oregon, rolling out to the rest of the country throughout 2017. While dealers in Washington State were scheduled to start receiving the Bolt EV by April, test driving one before then was going to be a challenge.

Fortunately, I happened to be in southwest Washington in mid-February to visit my parents and interview the inventor of another electric vehicle (who also happens to own a Bolt EV), which afforded me the perfect opportunity to jump across the river for a test drive at a Portland Chevy dealer. After a few calls, I found a Bolt EV available to test drive at Wentworth Chevrolet. When we arrived, a very knowledgeable and enthusiastic salesman named Michael Earl was happy to give my wife and me a test drive, even knowing that we were unlikely to purchase from him.

After the test drive, my wife and I were sold on the Bolt EV. At this point however, most Washington State dealers had already placed their first orders with the factory. We assumed that we would be waiting for wider availability later this year before we could buy, but we decided to stop into the Everett Chevrolet dealer just to find out what their schedule looked like. Amusingly, when we asked about the Bolt EV we learned that we knew more about the car than anyone at the dealership, since none of them had even seen one in person yet. But as luck would have it, one of their initial pre-order customers had just cancelled, opening up a customizable order for one of the first Bolt EVs to hit Washington State from the Chevy factory.

Imagine my surprise when I showed up at Everett Chevrolet in late April to pick up my just-built Bolt EV and the dealer had a whole row of them lining the street. It turns out that some Chevy dealers in California have been receiving Bolt EVs from the factory more quickly than they can sell them, so they’re trading cars with Seattle-area dealers. Luckily for you, this means that if you’d like to check out the Bolt EV yourself it should be relatively easy to find one to test-drive in the Seattle area now.

Fully loaded with the Premier trim, premium “Orange Burst Metallic” paint, the “Infotainment” and “Driver Confidence II” packages, as well as DC Fast Charging Capability, the price of our Bolt EV came out to around $43,000 before taxes and licensing. We’ll get $7,500 of that back in the form of a federal income tax credit next year, and the Washington State sales tax bill was $3,100 less than on a similarly-priced gas vehicle thanks to our state’s EV sales tax incentive that exempts the first $32,000 of the purchase price from sales tax. Still though, that was a pretty big check to write, considering that I’ve never spent more than $5,500 on a car before this. Thankfully, three weeks and over 800 miles later, I’m happy to report that I have not yet experienced any buyer’s remorse.

If you associate a loud engine with power, you’ll be surprised at just how quickly the Bolt EV can move. Whether I’m driving around my hilly Everett neighborhood or cruising down I-5, I have never found the Bolt EV to be lacking in power. It climbs hills like they’re nothing, and regenerates a considerable amount of power into the battery on the way back down. Even when you are already driving at freeway speeds, you can feel it push you back in your seat when you really step on the accelerator.

The Bolt EV gear shifter has four positions: Park, Reverse, Neutral, Drive, and “L,” a mode that lets you drive using just the accelerator pedal. In “L” mode, you press the accelerator to speed up, and let up on the pedal to slow down and stop, regenerating power into your battery rather than wearing down your brake pads. It took a little getting used to, but this is by far my preferred driving method in the Bolt EV.

The interior of the Bolt EV is roomy for what looks like a relatively small car on the outside. My daughter’s full-sized car seat easily fits in the back, with room for two adults to sit next to her, although I will grant that this arrangement is a bit snug. Headroom is plentiful, and even my tallest friends that have ridden in the car have no issues with ceiling clearance. The leather seats are comfortable in extended use, and the heated seats and heated steering wheel are perfect for the occasional cold morning drive.

The dashboard consists of a driver’s screen and a center screen with a small selection of physical buttons below it. A suite of five cameras provide front and rear-view views on the screen for parking, as well as a magical overhead 360º view that seamlessly stitches together views from all around the car (check it out in action at about the 7:30 mark in our video review). You can also flip a toggle below the rear-view mirror to turn it into a wide-angle screen that shows the view from a rear-mounted camera.

The Bolt EV is compatible with Android Auto and Apple CarPlay, which allow you to connect your phone for music, maps, and (voice-controlled only) messaging. I’ve been using Android Auto, and the experience has been very positive. It’s hard to imagine going back to a clunky manufacturer-designed car entertainment UI again. I do occasionally have issues getting a good initial connection, but once it’s connected, the maps and music experience is basically just like what you are used to on your phone.

The driver’s display contains some great at-a-glance information about how much energy the car is currently using (or regenerating), a min and max estimated remaining range, as well as whether the type of driving you’ve been doing over the last few minutes is likely to get you closer to the min or the max. Overall, I was very pleasantly surprised with the user interface design in the Bolt EV. It’s an easy thing to get very wrong, so it’s nice to see that Chevy apparently hired some thoughtful, competent UI designers for the Bolt EV.

The officially-stated range of the Bolt EV is 238 miles on a full charge of its 60kWh battery, but after a few weeks of driving, my car is estimating that it will get closer to 265 miles of range on a single charge. This past weekend I decided to put the Bolt EV to the test with a 200-mile round trip over the mountains on Highway 2 to Leavenworth for dinner at my favorite German restaurant Andreas Keller.

We started the trip with a full charge and an estimated range of 265 miles showing on the dashboard. I was fairly confident that the Bolt EV would make the trip on a single charge without any trouble, but just in case I scoped out a few EV chargers in Leavenworth on the PlugShare app ahead of time.

Climbing up to and through Stevens Pass on Highway 2 was a breeze in the Bolt. The estimated range remaining got as low as about 130 miles when we hit the peak elevation of our drive, but by the time we descended into Leavenworth it had increased back up to 152 miles.

At this point I had no concerns at all about making it home without charging up, but I wanted to check out the three EV chargers in town, just to see how accurate PlugShare was. All three chargers I had located in the app before the trip did in fact exist. One was blocked by a pair of gas-powered cars, but the other two were both open, including one Level 2 charger that was totally free to use. If we had charged up there during the hour and a half we spent at dinner, we could have added about another 40 miles of range to our battery.

After dinner we headed home, and when we concluded our 203-mile trip a couple of hours later the battery was still about 25 percent full and the dashboard estimated that we still had around 61 miles of range. Even with all the mountain driving, the Bolt EV’s initial full-charge estimate of 265 miles was holding up very well at the end of our journey.

Around 2:00 PM the next day, after another short morning drive that brought the battery down to about ten percent capacity, I hooked up the charger. Eight hours later my Bolt EV was fully charged up and ready to go.

My home charger is a “JuiceBox 40” Level 2 charger hooked up to a 50-amp, 240-volt circuit, which allows the Bolt EV to fully recharge from empty in about 9.5 hours, according to Chevy’s Bolt EV Charging Guide. The whole Level 2 home charging setup cost me about $600. A complete charge from empty costs me about six dollars at my current electricity rate. The basic charger that is included with the car plugs into a standard 120-volt outlet and would take over 40 hours to recharge the battery from empty. However, if you’re only driving 40-50 miles a day and charging every night, the basic charger is probably all you need to start each day with a full battery.

Bolt EV is the Electric Car to Beat

So far, the Bolt EV has exceeded my expectations. Chevy not only beat everyone else to the market with the first “affordable” all-electric car that can go over 200 miles on a charge, but they put out a car that is going to compete very well once the field starts to fill out more in the next few years with the release of the new long-range Nissan Leaf, a rumored long-range EV from Ford, and the Tesla Model 3.

The Bolt EV has plenty of power, handles well, is thoughtfully designed, and in my experience they are underselling its range.

I do have a few minor quibbles, such as the lack of any self-driving options, no HD radio, and no power seat adjustments, but overall I am impressed at Chevy’s first serious foray into the pure EV market. Chevy has successfully established the Bolt EV as the electric car to beat in this price range and battery capacity. It will be interesting to see how the market plays out in the coming years. 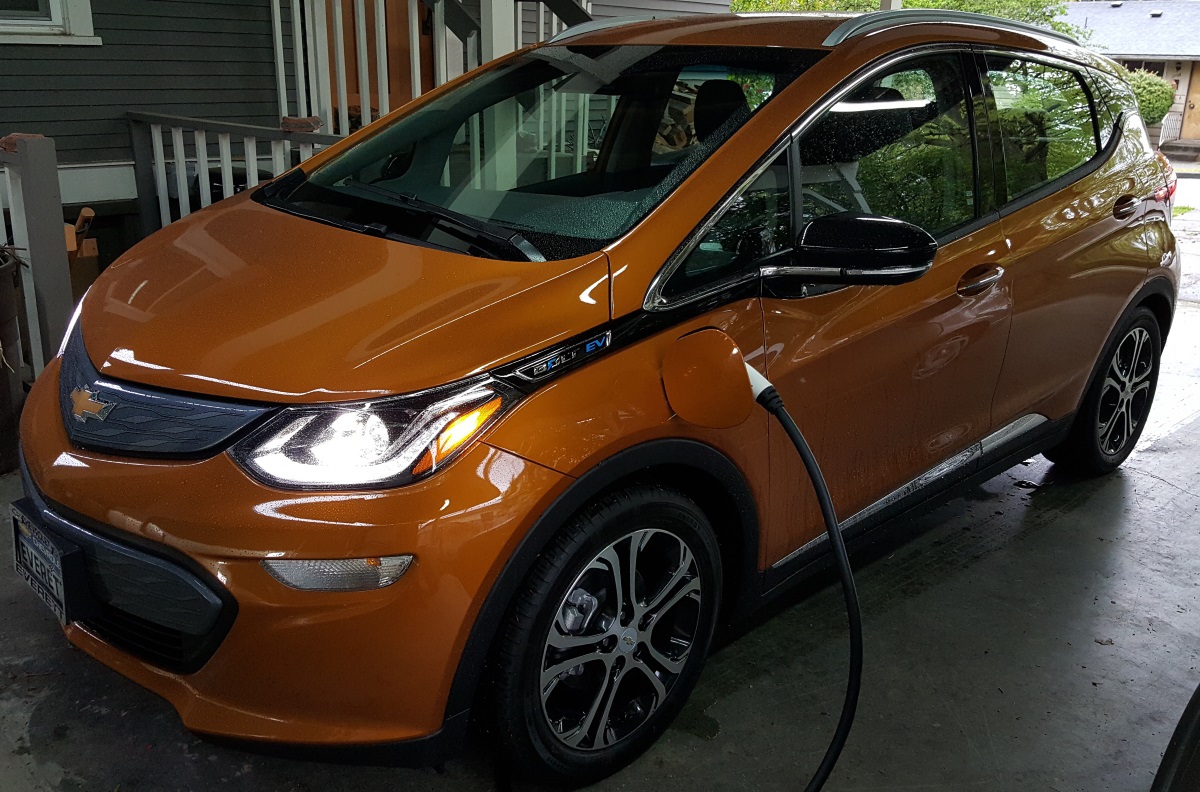 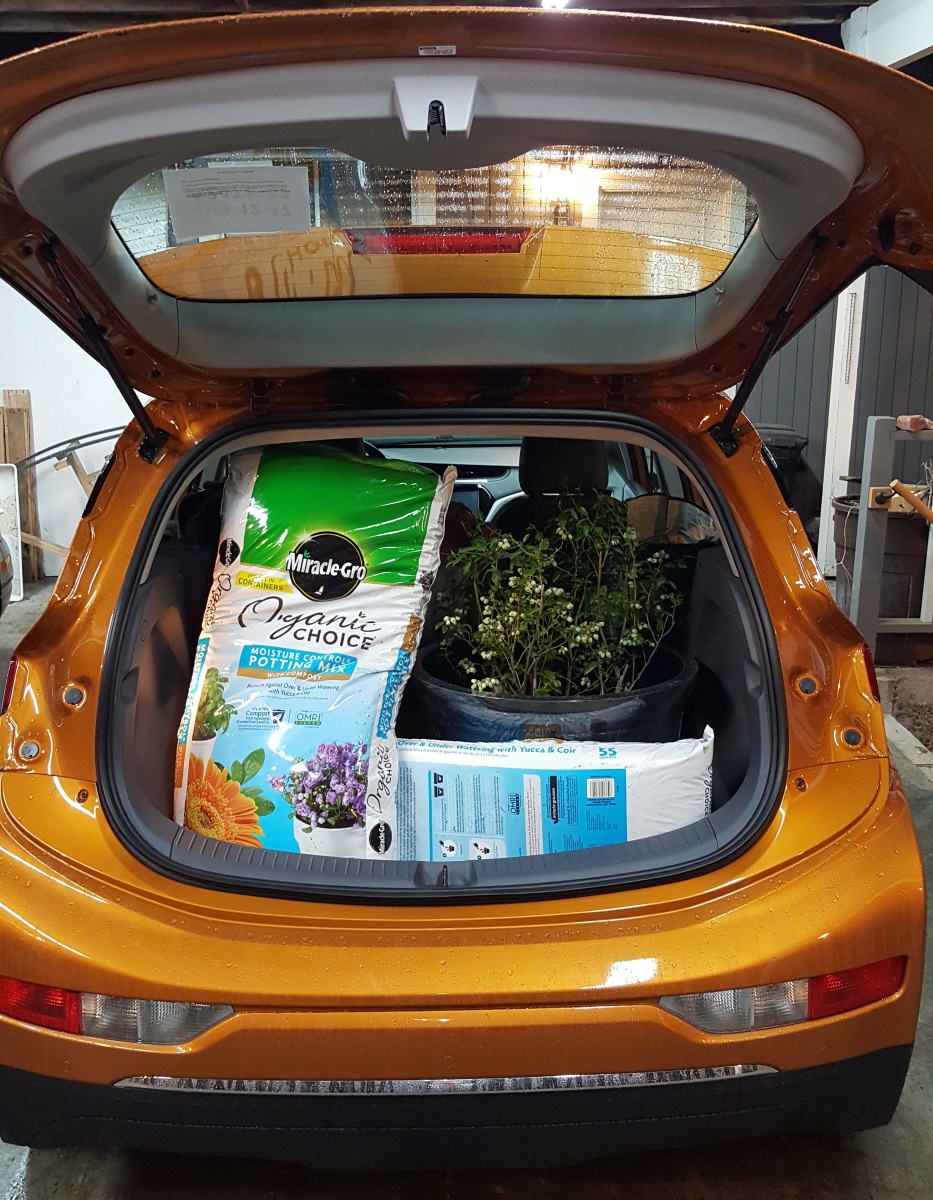 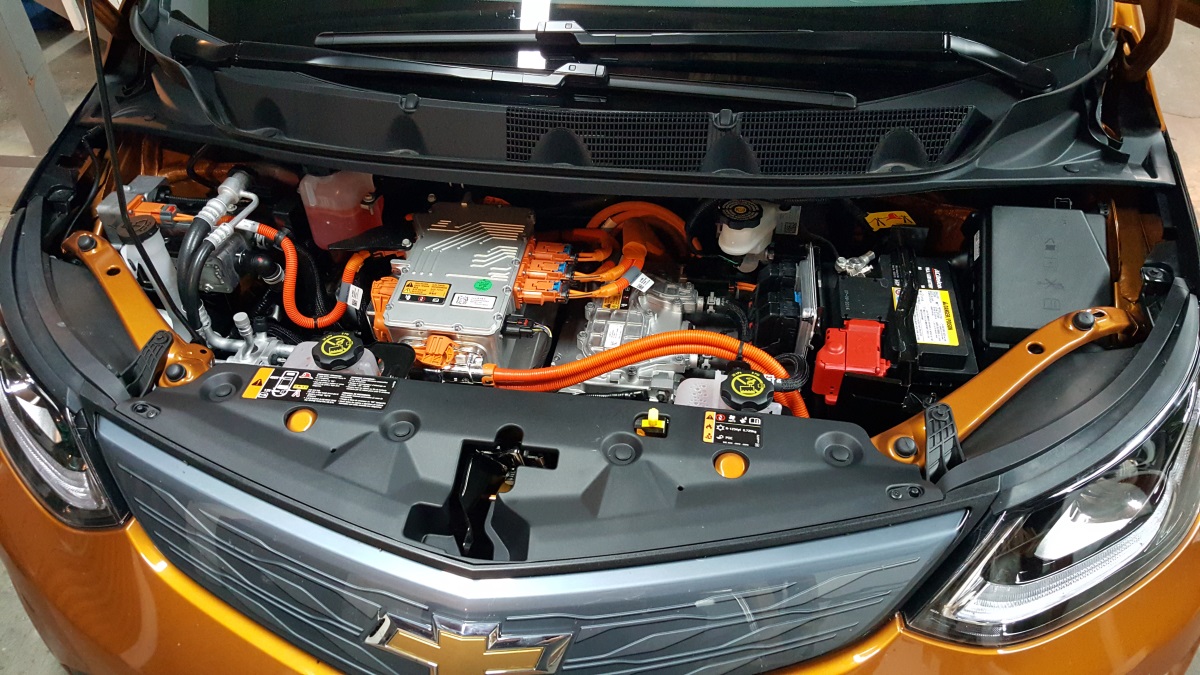 Under the hood of the Chevrolet Bolt EV 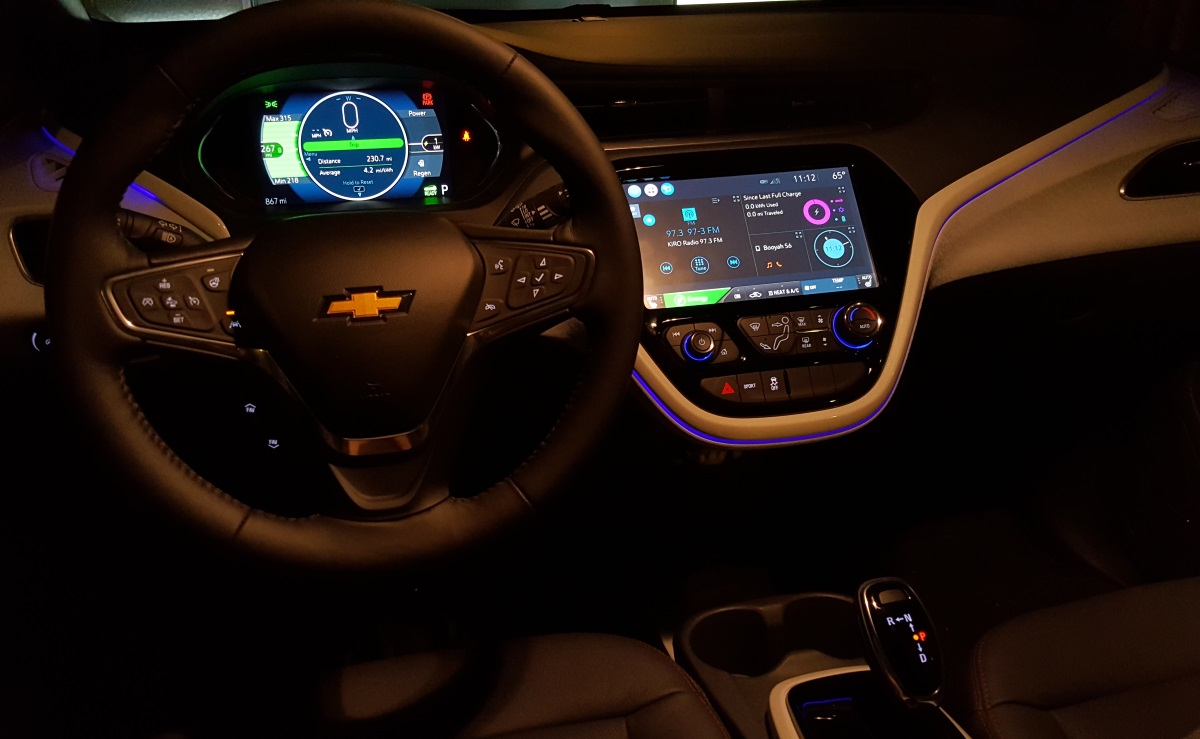 The Bolt EV dashboard at night 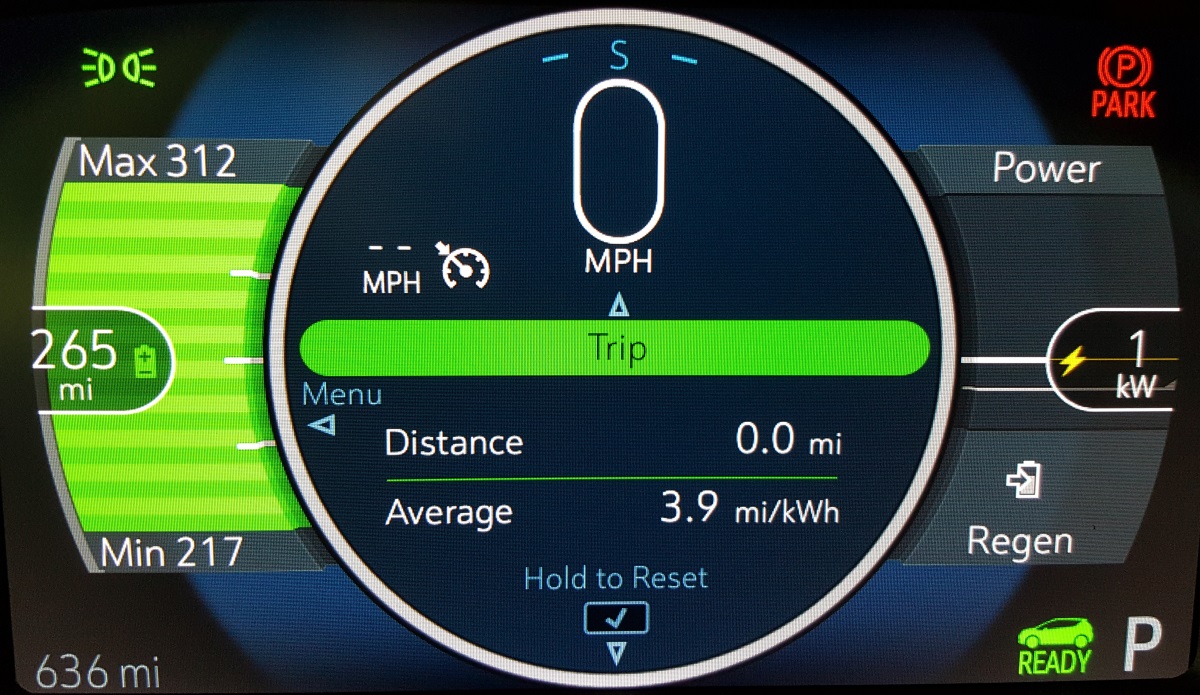 The Chevrolet Bolt EV fully charged up at the beginning of a 203-mile trip to Leavenworth, WA 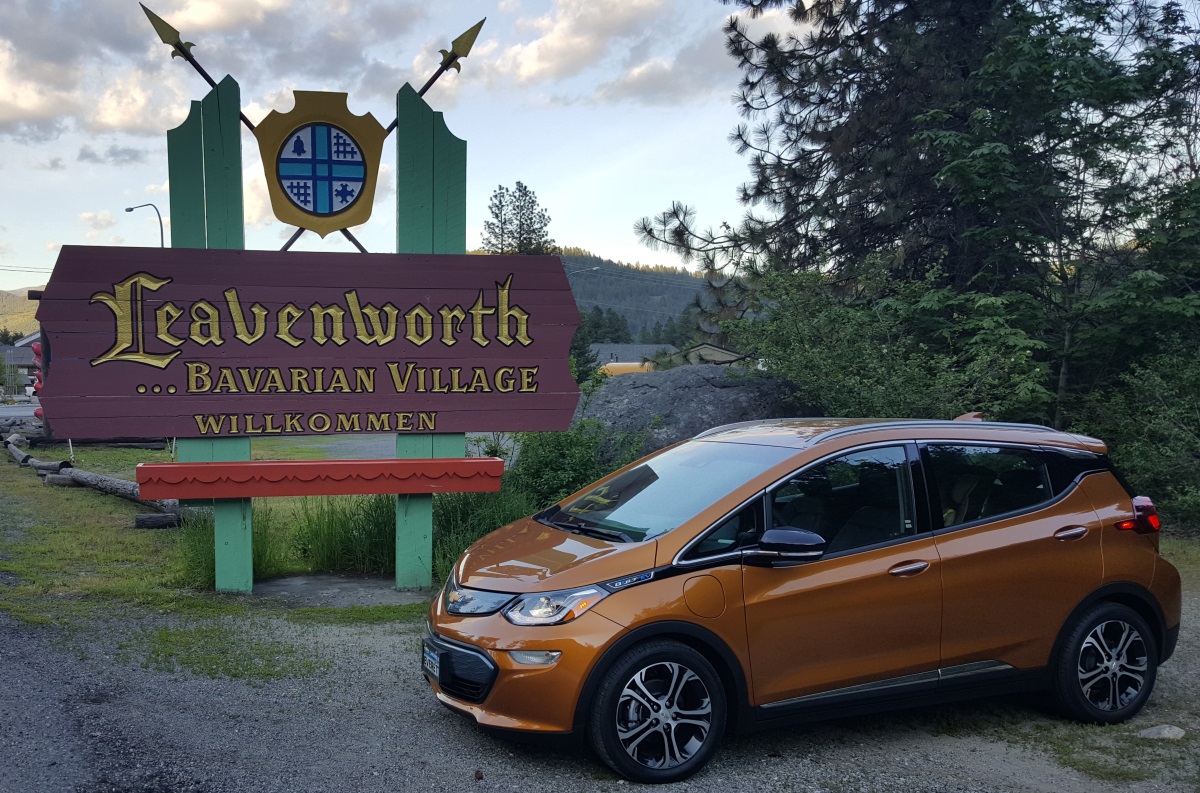 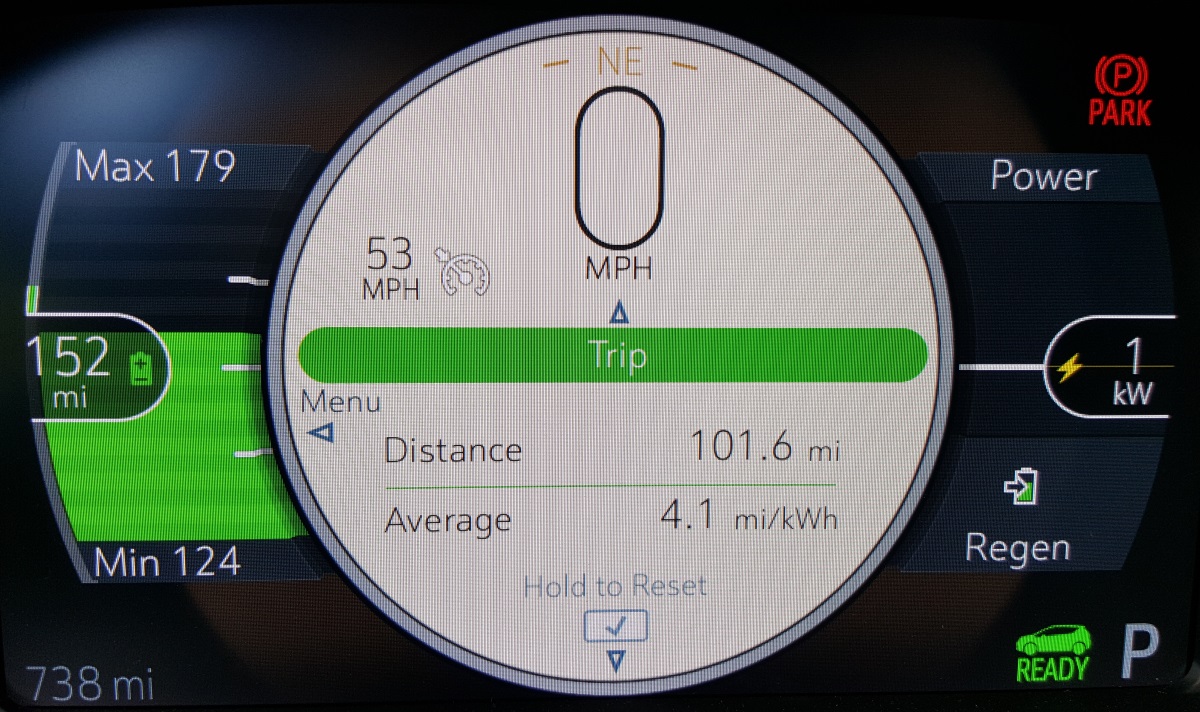 The Chevrolet Bolt EV battery status at the halfway point of a 203-mile trip to Leavenworth, WA 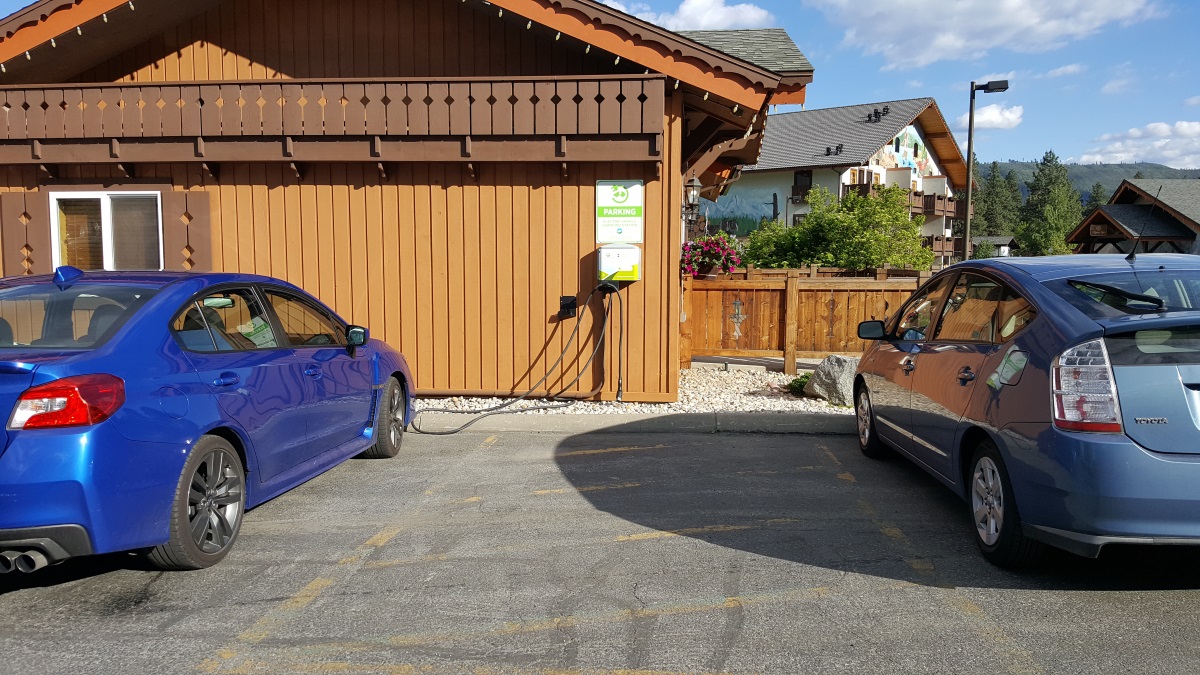 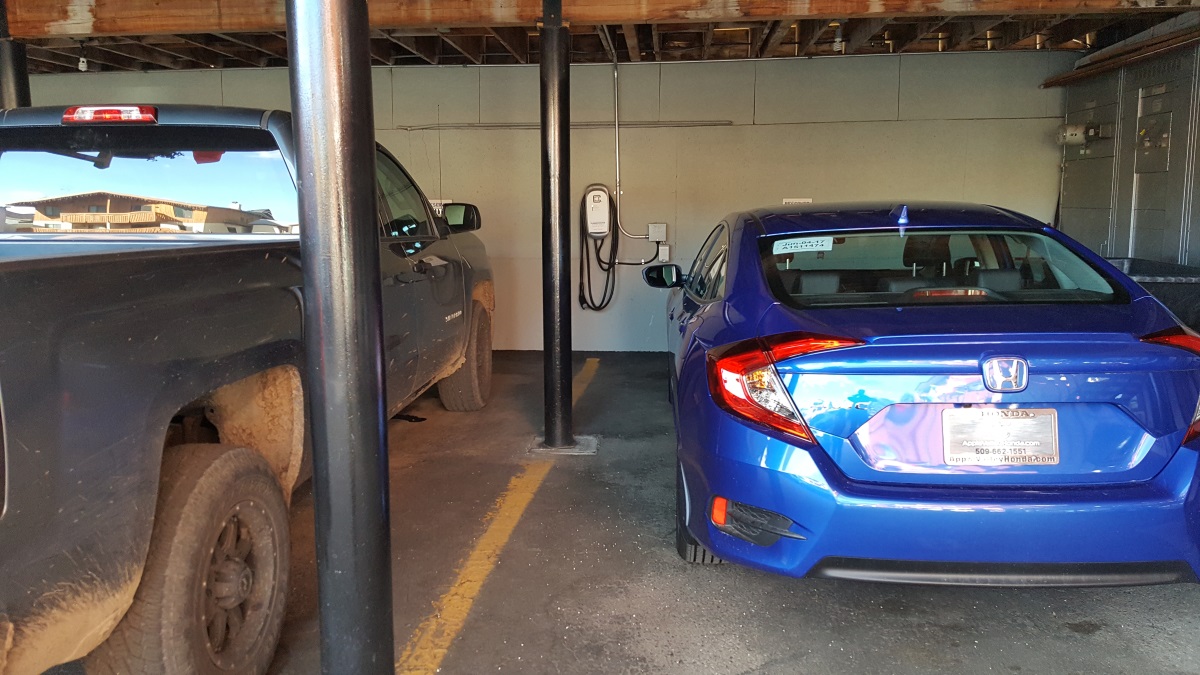 An EV charging station at a hotel in Leavenworth, WA blocked by two gas-powered cars 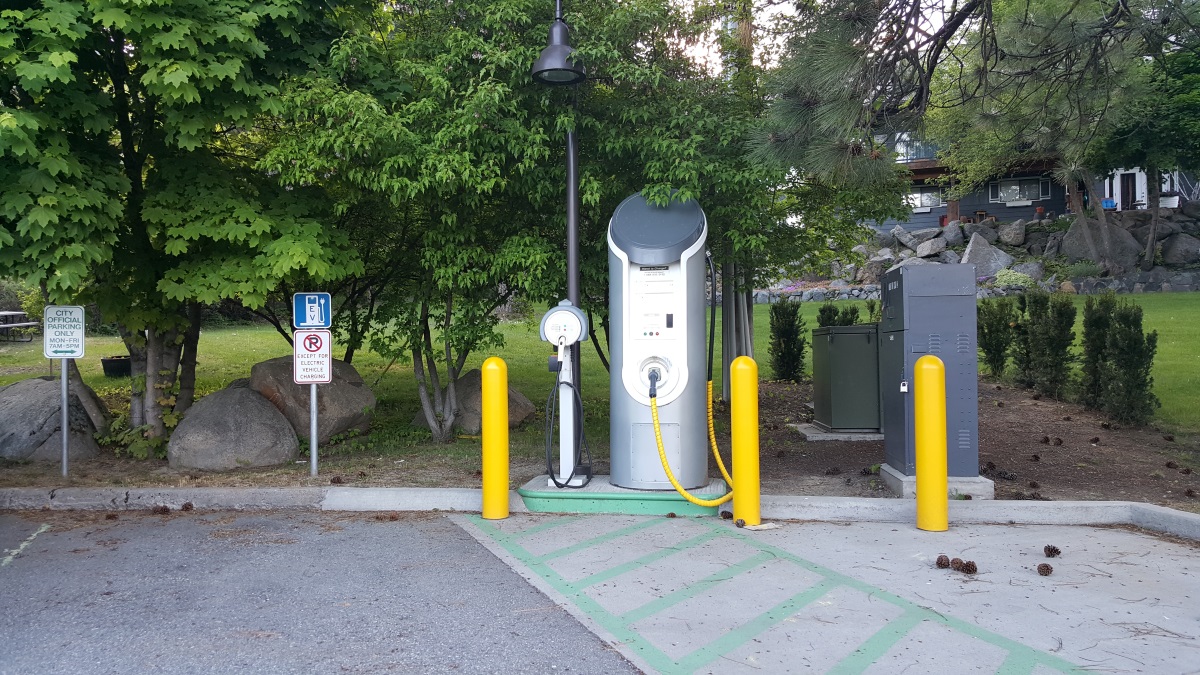 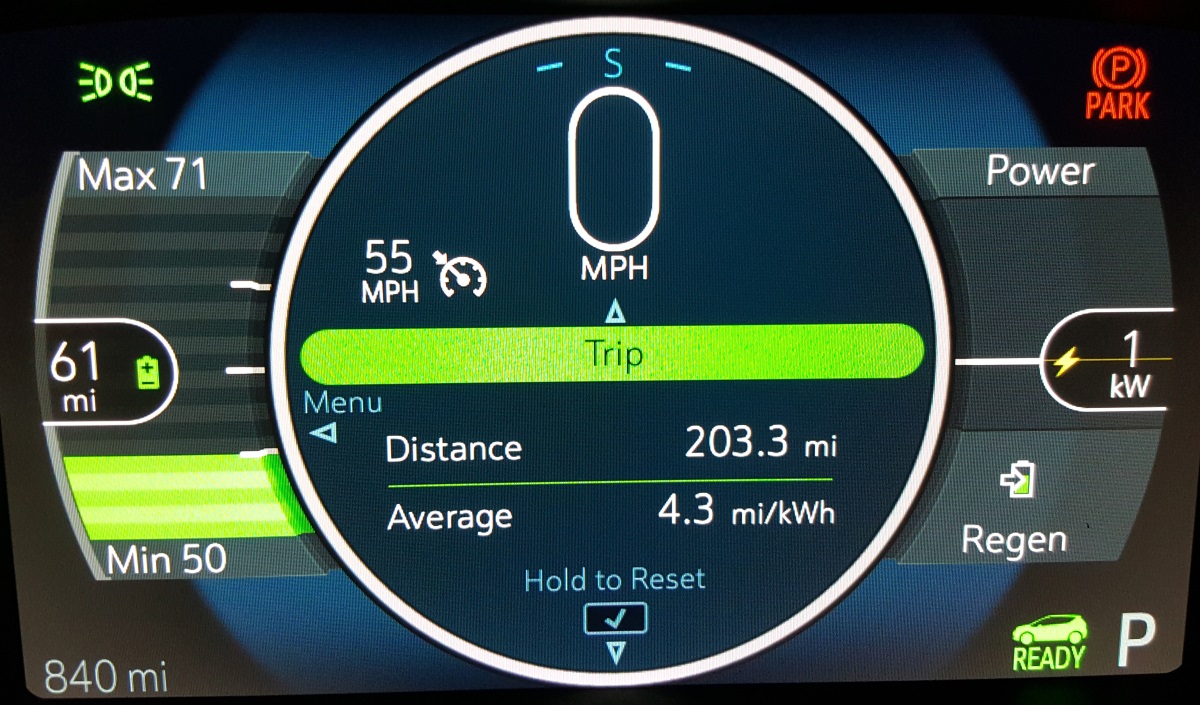 The Chevrolet Bolt EV still had 25 percent battery remaining at the end of a 203-mile trip to Leavenworth, WA 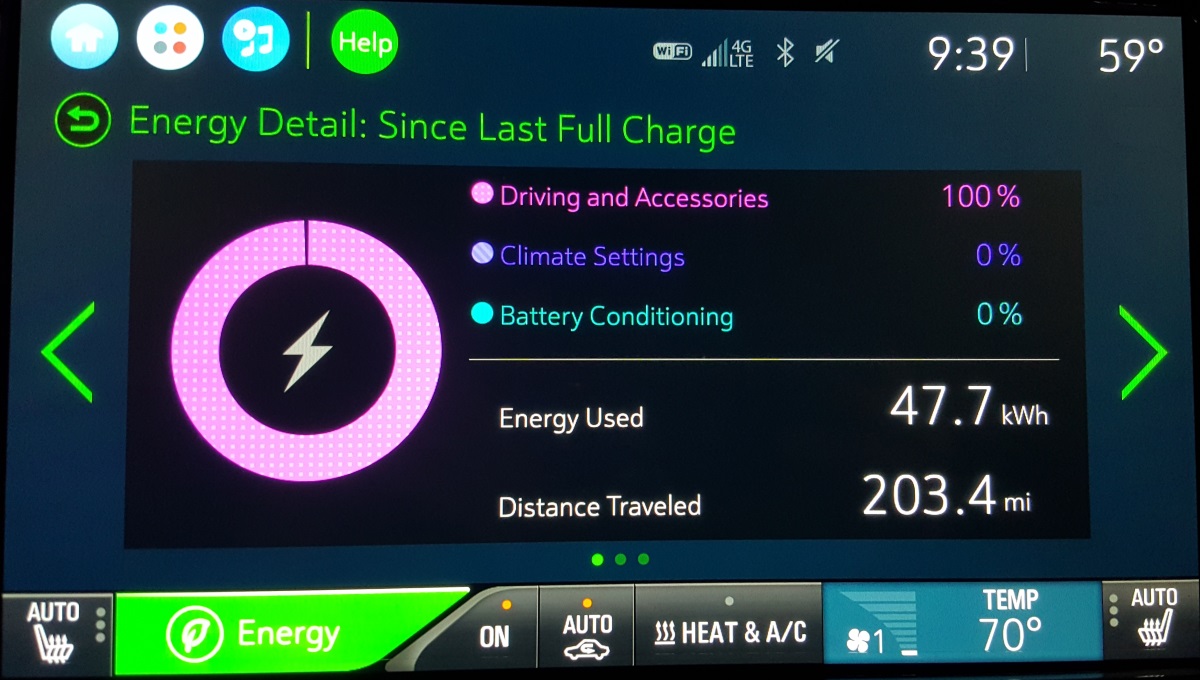 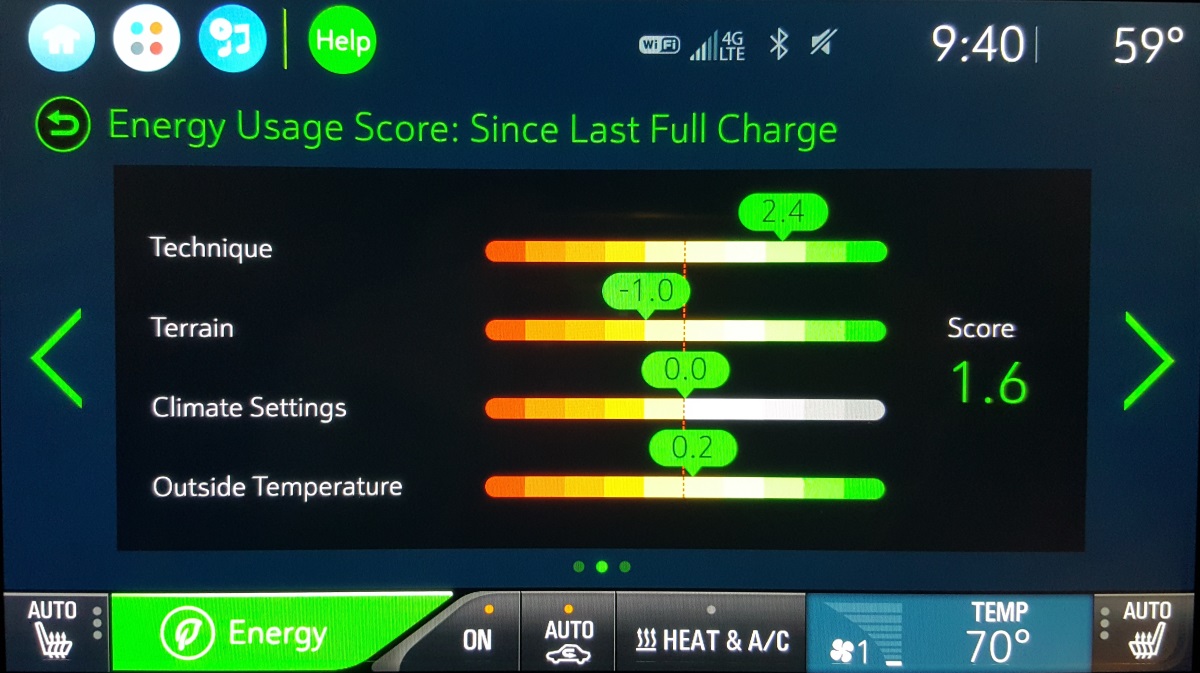 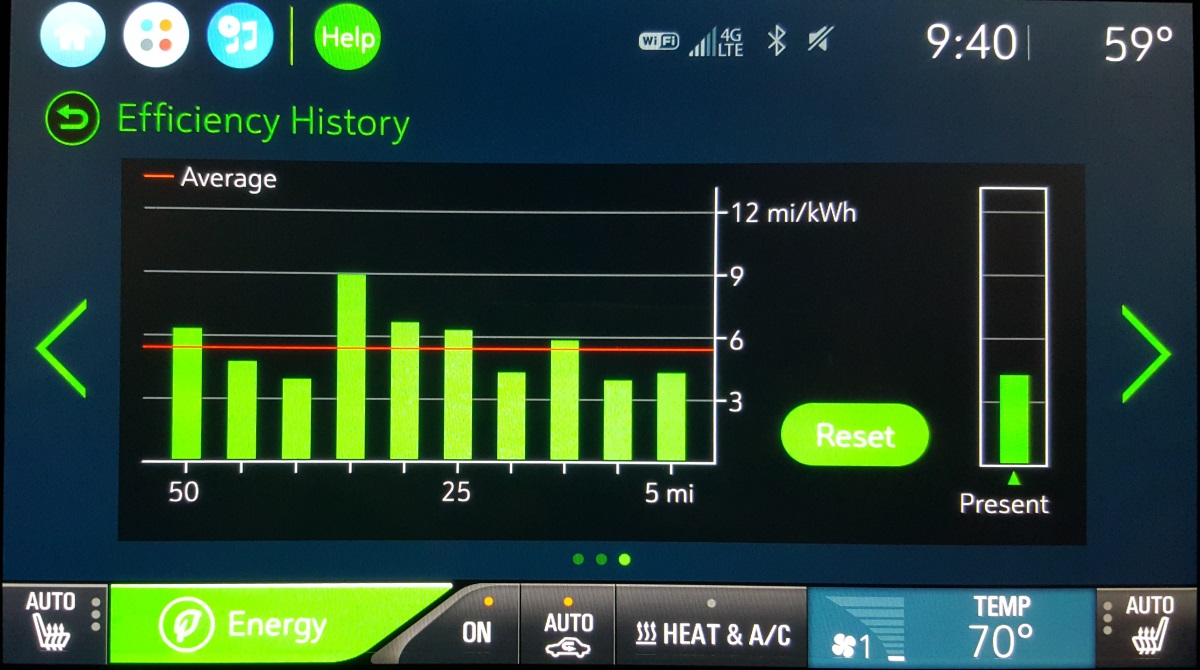 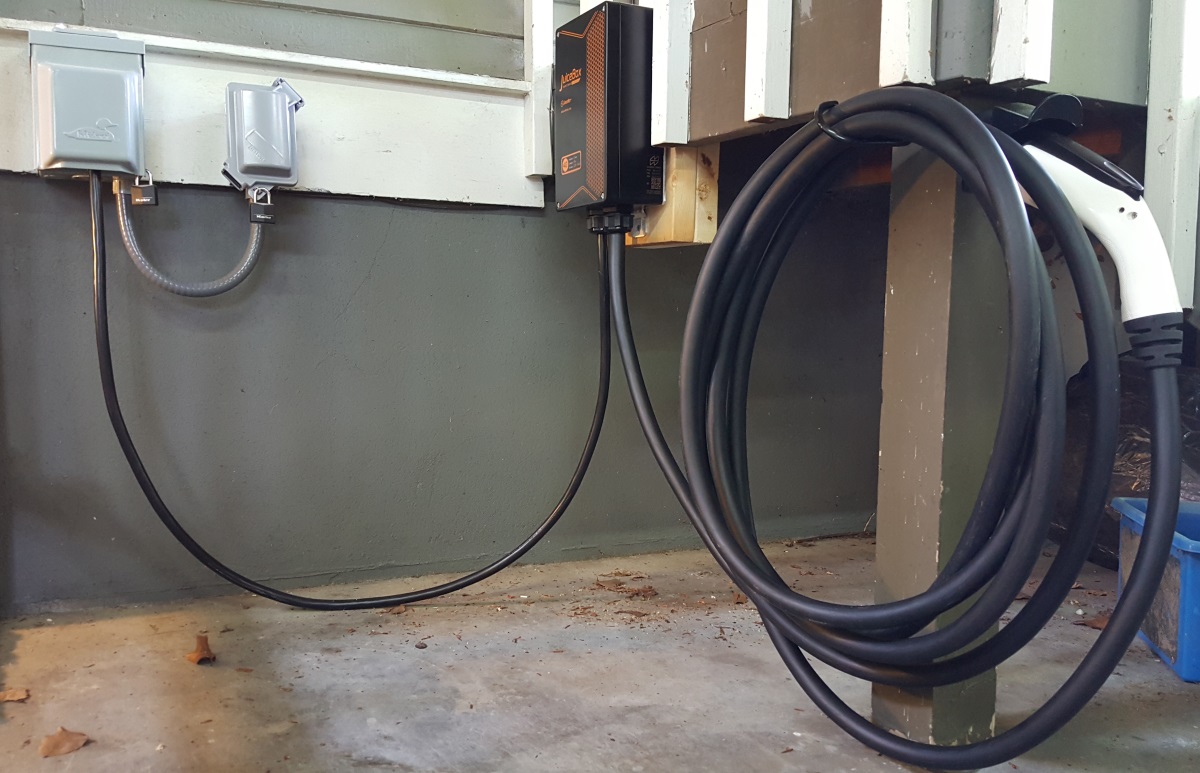