Chinese consumers are expected to purchase between 220,000 and 250,000 electric cars this year, making the country the world’s largest market for the vehicles.

The China Association of Automobile Manufacturers (CAAM), which announced the China sales data, says that US sales are expected to reach 180,000 this year, allowing China’s electric car market to overtake the US’s for the first time. 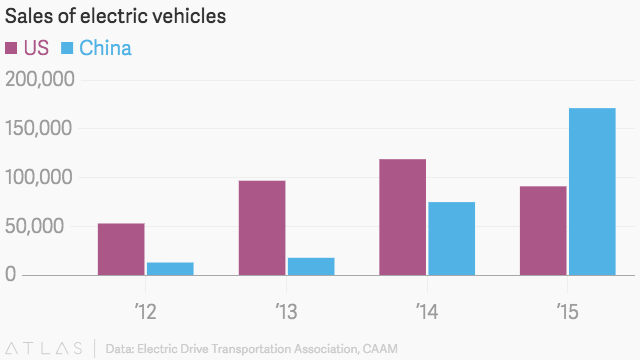 Following requests from Quartz, CAAM did not disclose what data it referred to for its US sales information, but figures from the Electric Drive Transportation Association, the US branch of the World Electric Vehicle Association, suggest 2015 is going to finish a particularly poor year for electric car sales in the country.

There are several reasons why that might be. Falling US gas prices could be lowering the motivation among some to buy an electric vehicle. Others might be waiting for new models—such as Nissan’s new Leaf, BMW’s new i3, or the new long-range Chevy Bolt—to arrive.