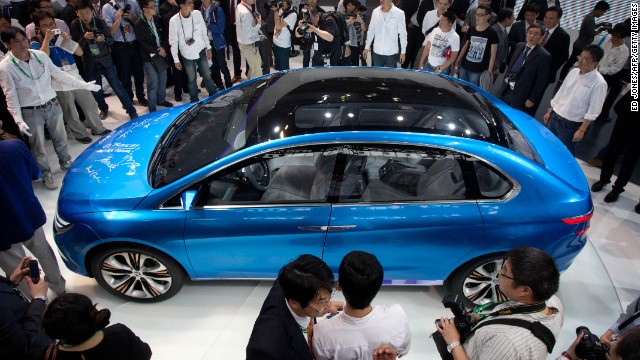 (CNN) — The room exploded in cheers when it was announced that the Denza electric car would sell for RMB 369,000 ($59,100), at the Beijing Auto Show earlier this week.

A joint venture between German giant, Daimler, and Chinese electric vehicle makers, BYD, the Denza is the latest car to take advantage of China’s push to put more green vehicles on its roads. It will start selling in September.

Denza’s affordable price places it at the opposite end of the market from its competitor, Tesla, another China-focused green model that is twice the cost at RMB 734,000 ($117,500).

The government is helping to boost Denza’s attractiveness with subsidies of up to RMB 120,000 that can be deducted from each vehicle, says Daimler.

The move could bring China one-step closer to widespread adoption of green wheels.

The issue of pricing, however, isn’t the largest obstacle to selling electric vehicles in China. Consumers say their cities are lacking a well-established battery-charging infrastructure.

Why is F1 so lucrative?

To combat escalating levels of air pollution, the Chinese government is promoting low-emission vehicles to the average driver, and has set a target of putting five million electric cars on the road by 2020.

Many incentives are in place to encourage consumers to adopt green car technology, such as a RMB 60,000 cash handout to buyers of electric cars.

Despite this, most drivers are still hesitant to go green. Less than 7,000 electric and hybrid vehicles were sold in the first quarter of 2014.

“I am afraid I will run out of electricity on the road and get stranded,” says Zhao Bi, a thirty-something fashion designer who lives in China’s capital.

Electric vehicle makers will typically install a charging station at a driver’s home, so cars can fuel up overnight. Drivers worry that would make trips beyond their nine-to-five routine impossible.

“I was thinking of owning a Tesla. It is cool, eco-friendly, and high-speed,” says Wang Yiquan, a 27-year-old media professional also living in Beijing.

Wang has been driving a Volkswagen Passat for the past two years. He is looking for a smaller car that will make parking easier, but he’s also looking for a “younger and cooler” brand of car to be seen in.

As a Beijing resident, Wang must apply for a license plate through a lottery system designed to limit the number of cars on the road. However, Daimler says its Denza will be exempt from this system and buyers in Shanghai and Shenzhen can even get free license plates.

In the end, Wang decided not to buy an electric car this year — like many of his peers. “I just don’t see charging stations in or outside of Beijing,” says the driver.

The Beijing municipal government also said earlier this month that 12 property developers have signed an agreement to co-operate with car companies in installing charging facilities at residential buildings and shopping malls.

Independent of the State Grid Corporation, Tesla is boosting consumer confidence with a promise to build a network of several hundred charging stations and service centers across the nation, the premium vehicle’s CEO, Elon Musk, said while handing over the keys to his first eight Chinese buyers in Beijing on Tuesday.

If these measures succeed, China’s green roads revolution may be just on the horizon.