In a four-story Bauhaus-style building west of Shanghai, nearly 500 engineers are working to put what they hope will be China’s answer to a Tesla Motors Inc.
TSLA


electric car on the road.

Their company, NextEV, currently doesn’t have anything to sell. It plans to unveil its first electric car in 2017.

“Our goal is to build a high-end, high-performance electric car for half the price of a Tesla car,” said Li Bin, co-founder and chairman of NextEV.


as an investor, NextEV is part of an increasingly crowded industry as the world’s biggest auto market welcomes a wave of new entrants—China’s deep-pocketed Internet giants. Concerned that conventional auto makers don’t have what it takes to innovate, Beijing has used generous subsidies to encourage tech firms to lead the way as it struggles to cut pollution and reduce its dependence on imported energy.

As well as attracting Internet companies, these auto startups have been backed by private equity, forged partnerships with Silicon Valley firms and hired talent from the global auto industry.

China’s industrial regulator amended rules in June last year to allow nonautomotive companies to invest in the electric car industry. “The auto industry is on the cusp of revolutionary change,” said a senior executive at a state-owned auto maker, who declined to be named because he wasn’t cleared to speak to media. “Beijing hopes that the Internet companies will bring innovation to the industry,” he said.


NextEV is one of nearly a dozen Chinese auto startups that have begun operation over the past 12 months.


is working on a self-driving car, which it says will hit the road in five years.

Sport-utility vehicles are currently the bright spot in a cooling Chinese auto market, but electric vehicles dominated this year’s Beijing auto show. Tech and entertainment company LeEco, which is better known for its smartphones, televisions and video streaming, showcased a concept self-driving electric supercar. Features include back seats that adjust to passengers’ bodies and a steering wheel that disappears in self-driving mode. It isn’t clear when the car will go into production.

LeEco Chief Executive Jia Yueting envisions a business model for his web-connected cars that would price them in a similar way to smartphones or televisions, with customers paying not so much for the hardware but for content such as TV shows, movies and other services. He sees his cars eventually being free of charge. “We are creating a new ecosystem for future mobility rather than just making a car,” he said. 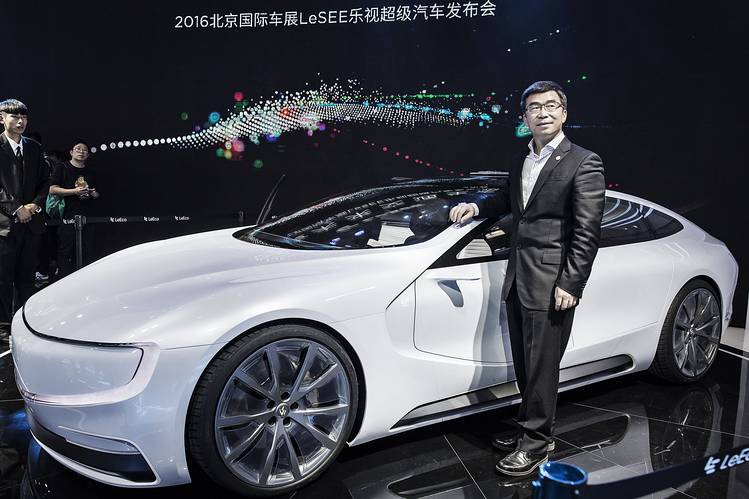 Turning these ambitions into reality will be tested by increasing competition and doubts about the sustainability of China’s subsidy-fueled boom in electric vehicles, particularly following a recent government probe into several suspected instances of subsidy fraud.

But startups say the game has changed. NextEV has struck a deal with a state-run company to help build its car. “I don’t think it’s difficult to build an affordable, high-end electric car, “ said Mr. Li. “Electric wheel motors and battery packs aren’t that complicated compared with internal-combustion engines.”

NextEV has hired more than 700 employees globally since it was formed in November 2014 and has four research centers. Its notable hires include Martin Leach, a former chief executive of Maserati, and Padmasree Warrior, former chief technology officer at Cisco Systems Inc.
CSCO

It has received investment from Sequoia Capital, Hillhouse Capital Group and Tencent and raised about half of the $1 billion it is targeting, said Mr. Li, adding that the remaining $500 million will be raised by the end of this year.

Electric vehicles in China are exempt from certain restrictions facing their gasoline-fueled counterparts. In Beijing for example, a consumer can buy an electric car and drive any day of the week, instead of being banned one day a week for a gasoline car.

But while sales of electric and hybrid cars and buses quadrupled in 2015 from the previous year to 331,000 vehicles, it is a tiny tally in a market where total vehicle sales exceeded 24 million. The surge was largely due to China’s generous subsidies for electric vehicle ownership—the future of which remain uncertain.

Such huge government spending isn’t sustainable given China’s slowing economy and issues with deteriorating local government debt, some analysts say. Beijing has also made it clear that it would reduce subsidies for electric vehicles over time.

Hou Yankun, head of China equity and Asian auto research at UBS, estimates that in 2015 China’s central and local governments spent a total of 90 billion yuan, or $14 billion, in the sector, including direct cash subsidies for electric vehicle makers and construction on public charging stations. Cash subsidies account for more than 40% of an electric car’s tag price, much higher than the 10% to 15% ratio in other markets, he said.

NextEV’s Mr. Li said he isn’t under pressure to make fast money. “Our investors have never set the timetable about when to make a profit,” he said.