(CNN)A Delta airplane slid off a runway late Thursday morning at New York’s LaGuardia Airport, its nose busting through a fence before skidding to a halt mere feet from the frigid East River.

Delta Flight 1086 briefly circled New York City due to issues with snow and ice before touching down shortly after 11 a.m., passenger Jared Faellaci told CNN. Almost as soon as it did, those aboard realized something was wrong — the aircraft’s wheels seemed to have little to no traction, sliding for about 20 seconds.

“You didn’t feel the wheels take,” Faellaci said. Then it was a matter of “where we are going to end up,” he said.

A little further, and the plane — with 127 passengers and five crew members — would have been in the icy waters rather than on the airport’s snow-covered ground.

Contrary to what Delta said in a statement, the aircraft’s slides did not deploy, according to Port Authority of New York and New Jersey Executive Director Patrick Foye. Still, with help from first responders, everyone was able to get off and onto buses that took them to LaGuardia’s Delta terminal.

Video shows passengers exiting the plane into the sub-freezing temperatures, as emergency vehicles converged on the area.

Faellaci, for one, was thankful for the plane’s crew, first responders and God that it wasn’t much worse.

“It was cause for a moment of prayer and a moment of reflection, as people were scared,” he said. “The pilot did a phenomenal job.”

Passenger: Some were calm, others were frantic 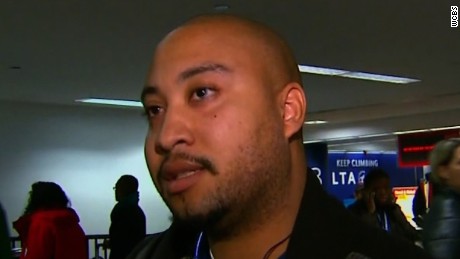 The plane left a relatively balmy Atlanta shortly after 9 a.m..

About two hours later as the flight approached its destination, LaGuardia was dealing with snow and freezing fog.

Prior to touching down, the plane’s pilot said weather problems could cause a delay. Still, little prepared passengers for what happened. Faellaci said he was reminded of the U.S. Airways plane that landed in the Hudson River in 2009. All 155 people aboard that flight — heading from LaGuardia to Charlotte, North Carolina — famously survived thanks to the skills of pilot Chesley “Sully” Sullenberger.

The landing of 1086 was terrifying for many.

Plane skidded off the runway at Laguardia

The Port Authority chief said plows had cleared the runway minutes before Flight 1086 touched down and that two other landing pilots had reported “good braking” action on Runway 13. Still, that doesn’t mean the pilot did anything wrong.

“I think the pilot did everything he could to slow the aircraft down,” Foye said. “Obviously, the pilot and the co-pilot’s efforts were reflected in the fact there were only minor injuries.”

After the plane stopped, emotions ratcheted down some but not entirely. Faellaci said there was some “panic and shoving your way to the front” to get off, though “for the most part it was very orderly.”

Passengers spent a few minutes standing in the snow — carrying little more than their wallets and phones — before buses took them into the warmth and comfort of the terminal.

Those catching connecting flights at LaGuardia may not be flying anywhere anytime soon.

Four minutes after the plane landed, all of LaGuardia airport shut down to air traffic. It will remain that way until 7 p.m., the Federal Aviation Administration reports, though the Port Authority chief did say one runway would open earlier Thursday afternoon.

The incident also caused a fuel leak, with fuel spilling out at a rate of about 1 gallon a minute at one point, Foye said. But that was contained by 12:25 p.m., at which point firefighters had put foam on the spill.

The incident makes an already nightmarish air travel situation on much of the East Coast even worse. LaGuardia is not the only airport experiencing headaches because of the wintry weather. Both New York’s Kennedy Airport and Newark Liberty International Airport, in northern New Jersey, were experiencing midday delays of more than three hours because of snow and ice, the FAA reported.

The worst off late Wednesday morning was Dallas Fort-Worth, where more than 400 departing (and another 400 arriving) flights were canceled, according to the flight tracking website, FlightAware. LaGuardia, though, outpaced that number later Wednesday afternoon.

In all, FlightAware reported the cancellation of more than 4,300 flights within, into and out of the United States as of 2:45 p.m.