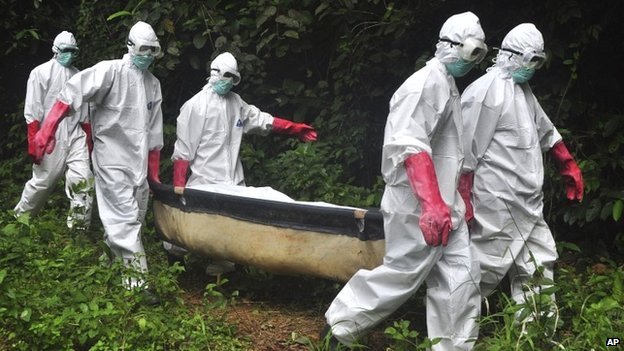 Liberia has opened a new national cemetery to provide safe burial sites for victims of the Ebola outbreak.

A Liberian official said the 50-acre site in Monrovia, half of which is ready to use, will enable “dignified” burials instead of cremations.

Meanwhile, the World Health Organization says the number of people infected by Ebola in Liberia, Sierra Leone and Guinea has now passed 20,000.

The virus has killed more than 7,800 people since it broke out a year ago.

The WHO said more than a third of the 20,081 cases in the West African states were in Sierra Leone, which has become the worst-hit country.

The situation in Liberia has improved in recent months but health officials warned on Monday that dozens of new cases had emerged near the country’s border with Sierra Leone.

Liberian Assistant Health Minister Tolbert Nyenswah said the new cases, mostly in Grand Cape Mount County were due to the movement of people across the border and the traditional practice of washing victims’ bodies.

“In a very small population, an increase in the number of [Ebola] cases raises high levels of concern that we need to take very seriously – the people of Liberia and people of Grand Cape Mount in particular,” Mr Nyenswah said.

Mr Nyenswah said the new site would be staffed by trained burial teams and would accommodate Muslim and Christian ceremonies.

He said the site would allow “dignified and safe burials, where people can practise their rituals but not touch dead bodies”.

A memorial to Ebola victims who have been cremated will also be erected there, he added.

Nearly 3,400 people have died from Ebola in Liberia over the past year with nearly 8,000 cases total.