Four towns and cities have been given a share of a £40m fund to promote the uptake of plug-in electric cars.

Local authorities in Nottingham, Bristol, Milton Keynes and London successfully bid for money to invest in the technology, the Department for Transport announced.

They set out a number of proposals, such as building street lights that double as charge points and making 25,000 parking spaces free for plug-in car owners, saving commuters up to £1,300 a year.

Other suggestions as part of the Go Ultra Low City Scheme include ensuring ultra-low emission vehicles (Ulevs) have privileges such as access to bus lanes.

In 2015 sales of alternatively fuelled vehicles rose by 40 per cent from the previous year to 72,775 – a market share of 2.8 per cent – according to figures from the Society of Motor Manufacturers and Traders. This included plug-in hybrid sales more than doubling, while pure electric cars were up by around 50 per cent.

The Secretary of State for Transport, Patrick McLoughlin, said the winning bids had proposed “exciting, innovative ideas that will encourage drivers to choose an electric car”. He added: “I want to see thousands more greener vehicles and I am proud to back this ambition with £40m to help the UK become pioneers of emission-cutting technology.

“The UK is a world leader in the uptake of low-emission vehicles and our long-term economic plan is investing £600m by 2020 to improve air quality, create jobs and achieve our goal of every new car and van in the UK being ultra-low emission by 2040.”

BMW Group, which builds Mini cars in Oxford, has promoted the use of street lights as charging points and supported the city in its successful bid. 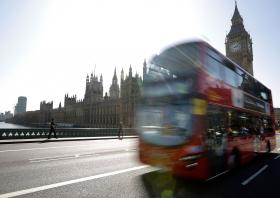 Frank Bachmann, managing director of the Mini plant, said the so-called “light and charge” technology has “huge potential to increase the uptake of electric vehicles” across the UK.

London was awarded £13m to prioritise Ulevs in several boroughs, such as introducing charging infrastructure to over a dozen streets in Hackney.

Milton Keynes will get £9m to build a centre for providing consumer advice about electric vehicles (EVs) and offer short-term loans. The town also proposes to open its 20,000 parking bays for free to EVs.

Some £7m will go to Bristol for the introduction of free residential parking for Ulevs, access to three car share lanes and over 80 fast chargers.

Nottingham and Derby will use £6m to install 230 charge points and pay for a programme to enable local companies to try Ulevs with a view to buying them.

Poppy Welch, head of Go Ultra Low, said the money would help put the UK “at the forefront of the global ultra-low emissions race”.

The funding complements other initiatives to support low-emission vehicle schemes, including £400m of plug-in car grants and investment in low-emission buses and taxis.