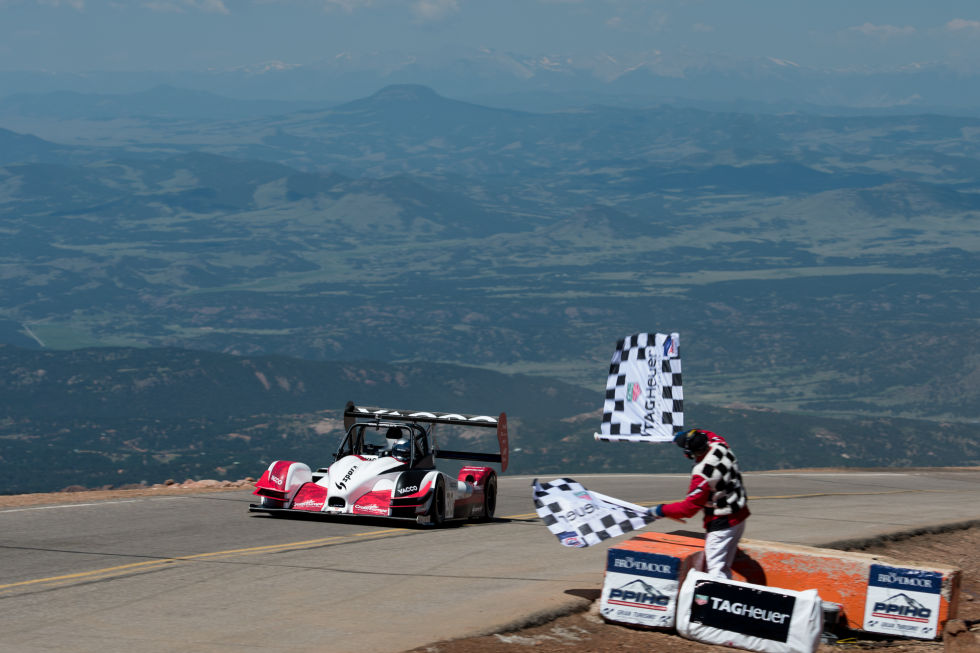 Despite a blown engine that prevented any running on the Friday before the race—and an epic case of jet lag after winning the 24 Hours of Le Mans the week before—Romain Dumas was the fastest man of the day at Pikes Peak, setting the second-fastest time ever.

COLORADO SPRINGS, Colo.—The Pikes Peak International Hill Climb turned 100 this year, making it five years younger than the Indianapolis 500. Other than age, the two events have very little in common. The first Indy 500 came about because Carl Fisher wanted to give America’s new car builders somewhere to test their creations; by contrast, Spencer Penrose organized the first Pikes Peak Hill Climb in 1916 to help draw tourists to the mountain (and in turn, his hotel the Broadmoor). Ironic then that all these years later it’s Pikes Peak—rather than Indianapolis—that’s being used to test the cutting edge of automotive technology.

In particular, people have been bringing electric cars and motorbikes (you can read about those later today) to test them on the hill climb. The 12.4-mile (19.99km) course is short enough that they don’t need to be overburdened with batteries, for one. And unlike internal combustion engines, electric motors don’t care whether they’re at sea level, the start line (9.390 feet/2,862m), or the 14,110-foot (4,300m) summit—they make the same amount of power everywhere.

When last we checked in from America’s Mountain, Romain Dumas and his Norma M20 RD Limited Spec-2016 were the fastest combination of man and machine, topping the qualifying charts. This somewhat upset the narrative—for the Norma runs in the Unlimited class and does so on gasoline, not electrons. As the fastest overall qualifier, Dumas would be the first of the cars to set off, some two hours later than planned. Below the tree line the weather was perfect, but icy conditions up top saw several motorbikes crash, causing several lengthy delays.

(Things got worse later in the day for all the racers, who have to wait until the final car has reached the top before they can descend en masse. Check out the hail covering Jonathan Frost’s car in this video of him coming back down.)

Last year’s overall winner, Rhys Millen, had to settle for being the second car to run, still the fastest of the Electric Modified class, followed by Tetsuya Yamano in the Acura 4-Motor EV Concept. Paul Dallenbach’s fossil-fueled car split these two from the next-fastest EV, that of “Monster” Tajima.

As it turned out, qualifying position was remarkably predictive; the cars finished in the order they ran. Dumas set the fastest time overall—and the second-fastest time at Pikes Peak ever—8:51.445. Evidently recovered from his win at Le Mans (and the associated jet lag), Dumas’ win came after an engine failure on Friday that prevented the team from getting any practice time on the upper section of the course. Millen’s Drive eO was fastest of the EVs, also breaking the nine-minute barrier (8:57.118). Yamano and the Acura were seven seconds behind (9:06.015), then Dallenbach and Tajima. (Full results can be found here, and you can read more about how Tajima got on in our feature later this week.) 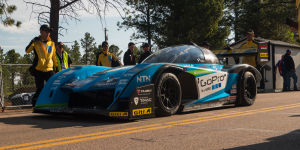 We get our first look at the electric vehicles that will race on America’s Mountain.

Even Dumas was a little taken aback by his win, having expected the electric cars to be more dominant. “24 hours ago, this win was unimaginable. I have no words to explain the work put in by the team, especially this week and even more so since Friday morning. This team, with the help from Norbert Santos, it’s my pride. The guys didn’t sleep while they were putting the car back together. We really had our backs to the wall but we did it. We could have done better in terms of the time, that’s certain,” he said. “But this event is so unique. Pikes Peak has a point in common with Le Mans; you never know what to expect and you have to put all the right puzzle pieces together the day of. So when there’s a victory at the end of it all, it’s a huge satisfaction.”

The final car in the Electric Modified class—Rick Knoop’s Entropy Racing machine—ran into problems when a motor malfunctioned, giving Knoop just half the car’s 180hp (134kW). Knoop finished in 15:02.413, a disappointing result for a car that would have posted a time in the 11-minute range had all been well.

The Electric Production class was somewhat undersubscribed, with just a sole entry from Blake Fuller in a Tesla Model S P90D. Nevertheless, Fuller set a new course record for essentially unmodified electric road cars. Fuller’s Tesla was almost completely stock, save for the addition of a roll cage and some grippier tires, along with about 800lbs (362kg) of weight reduction. (You can see a more detailed look at Fuller’s car courtesy of The Fast Lane Car’s video.) Fuller got to the top in 11:48.264 in the world’s first racing Tesla.

Check back later today for some news about the motorbikes at Pikes Peak.