Flying cars: A 1950s dream takes to the skies without the rules to stay airborne – USA TODAY

AeroMobil released its flying car for consumer orders. As expected, the price tag will be hefty and you’ll have to wait for a while before it comes home with you. 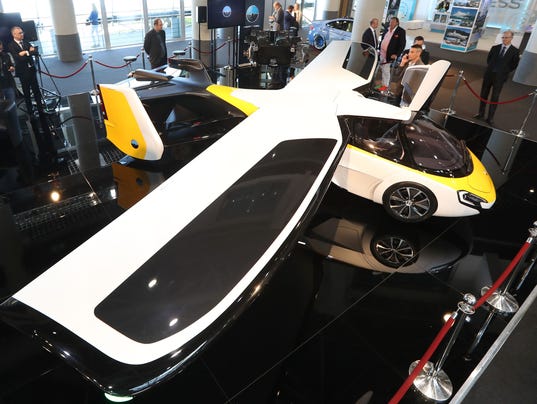 The Aeromobil, a flying supercar, is on display as part of the “Top Marques” show, dedicated to exclusive luxury goods, in Monaco April 20, 2017.(Photo: Valery Hache, AFP/Getty Images)

SAN FRANCISCO — So here’s just how fast technology is accelerating. We haven’t even nailed down self-driving cars yet, and now the buzz is all about flying cars.

In fact, the dogged pursuit of an airborne escape from traffic has been with us for more than half a century, from the limited-edition Aerocar of the 1950s to the host of contemporary companies now taking pre-orders for their airborne vehicles.

Dutch startup PAL-V announced last week that it was taking $10,000 deposits for its $400,000-and-up two seat Liberty flying car, while Slovakia-based AeroMobil began doing the same for its $1 million-plus machine due out in three years. Both models would require a runway and a pilot’s license.

Other big players include Massachusetts-based Terrafugia, whose XF-T looks like a car with wings folded by its sides and, notably, can take off and land vertically, using so-called VTOL technology. The company’s site claims flying an XF-T won’t require a full pilot’s license.

Five MIT graduates founded Terrafugia in 2006. Their proof of concept vehicle was first flown and driven in 2009. (Photo: Terrafugia)

That’s the same approach taken by Germany’s Lilium Aviation, which just conducted a successful unmanned test flight of its VTOL craft with wheels.

And ride-hailing giant Uber, whose ambitious push into self-driving cars is entangled in a lawsuit from rival Google, also envisions a world where your Uber ride can skip the downtown gridlock by taking to the skies. On Tuesday, Uber will host an Elevate conference in Dallas on that idea.

From the looks of these big technological leaps, it would appear that hopping a flight to the office is but a few years away. Time to sell the car and buy a parachute.

Throttle it back a bit, industry experts say.

“Generally speaking, technology is outstripping not just existing regulations, but the speed with which government regulators can rule on new regulations that ensure new technology is safe and organized,” says Karl Brauer, executive publisher of Cox Automotive, which includes Kelley Blue Book.

Brauer points out that the Department of Transportation is still trying to iron out rules for autonomous car companies, “and now you’d have a machine that operates in yet another dimension of space. There are just regulations questions all over the place.”

The Federal Aviation Administration says it is discussing certification options with some flying car manufacturers, with the agreement that initially pilots would be at the helm of such craft.

Dick Knapinski, spokesperson for the Experimental Aircraft Association, says “there’s no question that 25 years ago, we didn’t have the technology to consider any of this. But considering we’re still trying to figure out how drones should use air space, having cars flying around could take a while.”

Engineering a flying car is easier today than its every been, thanks to considerable advancements in lightweight materials, electrical power generation and computer-assisted design that doesn’t risk lives with live trials. 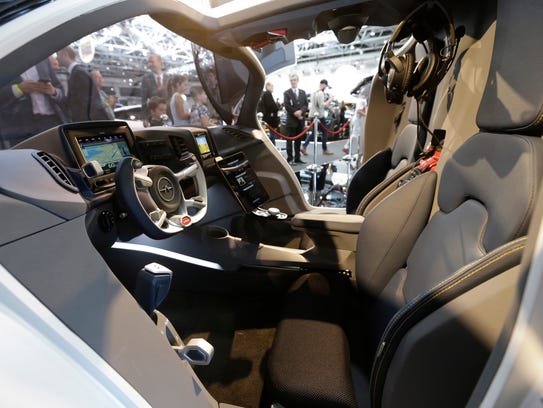 A view of the cockpit as AeroMobil unveils the latest prototype of a flying car, in Monaco, Thursday, April 20, 2017. (Photo: Claude Paris, AP)

What’s more, where dedicated hobbyists once made up the bulk of those trying to fashion a machine that could seamlessly transition from concrete to the clouds, today some of the smartest and wealthiest individuals on earth are on the hunt. Larry Page, co-founder of Google, has personally invested in two secretive flying car companies, ZeeAero and Kitty Hawk.

Much like with self-driving cars, actually creating a dual-purpose flying car is more likely a matter of when than if.

When it comes to overcoming regulatory obstacles, flying car startups may be taking their cues from SpaceX and Tesla CEO Elon Musk, who bulldozed his way into the automotive manufacturing business.

While Tesla’s profitability remains a concern for investors, there’s no question that Musk has made a name for himself and his sleek electric sedans while causing many consumers to reevaluate electric vehicles.

Similarly, flying car companies may also be taking an if-you-build-it-they-will-buy-it approach, banking on public demand pushing lawmakers to pave the way for the new transportation. Terrafugia, Zee.Aero and others did not respond to a request for comment.

For the moment, the FAA is taking a “flexible, risk-based approach” to evaluating this evolving tech, especially when it comes to machines that would not require drivers to be pilots and instead fly themselves. 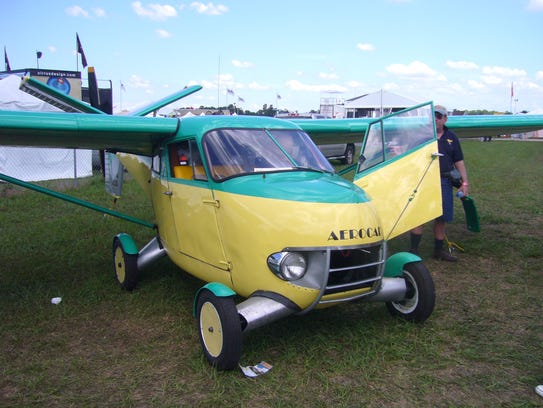 This is a 1956 Aerocar, one of five still in existence and the only one still flying (the other four are in museums.) This one is currently owned by Ed Sweeney and was on display at the Sun-n-Fun air show in Lakeland, Fla. in April 2008. (Photo: Tim Loehrke, USA TODAY)

“Autonomous passenger air car concepts are still in their early stages (and) several areas need further research,” including the aircraft’s operational risks and its ability to interact with air traffic control, the FAA said in a statement sent to USA TODAY.

As for consumer’s embracing this new form of travel, given how long this almost cartoon-ish vision (think The Jetsons) has tantalized us, it would stand to reason that everyone would be on board.

But a recent survey by the University of Michigan’s Transportation Research Institute suggests that such excitement is tempered by real concerns. After all, a fender bender on the ground is already a hassle; an airborne one could be a disaster for those above and below.

According to UMTRI’s survey, while 75% cited shorter travel times as a reason for being interested in the tech, 62% said they “very concerned” about the overall safety of flying cars, with more than half troubled at the prospect of being in such craft in poor weather or at night.

More than 60% were moderately or very concerned about the skills required to fly the vehicle, which is perhaps why VTOL machines that are fully automated have the greatest chance of gaining mass acceptance from commuters.

Would you pay $1.3 million for a flying car?

Last fall, Uber published a white paper that suggested the ride-hailing giant, which is in the middle of a series of cultural crises, was going to seriously pursue not just autonomous cars but also self-flying VTOL aircraft. The paper sketched out a future filled with on-demand air transportation that would shorten a two-hour San Jose to San Francisco drive to a 15-minute VTOL breeze.

“We believe in the long term, VTOL will be even less expensive than owning a car,” the paper notes, citing high demand that would trigger high production and lower vehicle costs.

On the flip side, hurdles acknowledged in the Uber document include certification by U.S. and European agencies that regulate the skies, further improvement in battery technology that would keep the craft light and flying for longer periods, and reliability issues when considering a craft that must repeatedly collect passengers with gentle landings but also get them places at up to 200 mph.

In the meantime, the high-tech tinkering continues in workshops around the world, driven as much by innovation as by the simple desire to get out of earth-bound gridlock.

“Everyone’s had the same dream,” says Brauer. “You’re stuck in traffic, and you imagine yourself simply flying away.” 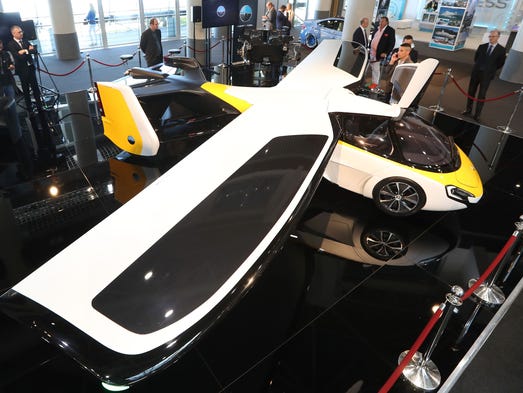