Jefferson Graham runs down those 4 wild tech announcements–from the flying boats and cars to drone goggles and Amazon’s closet camera, on #TalkingTech 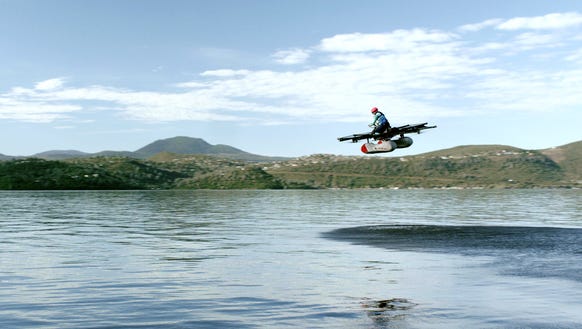 LOS ANGELES — It’ll be hard to top this week for wild, crazy technology unveilings. And some may even end up in your hands.

Where to start? How bout: the flying car that looks like a boat, or jet skies maybe, or perhaps a huge drone. The Kitty Hawk Flyer, the personal project from Google co-founder Larry Page, has to top the list of far-out tech product announcements. It’s a vehicle that flies — hot trend this month, by the way — but stands out for this feature: It only flies over fresh water.

And Page’s pond jumper was only the half of it.

—Uber also envisions a time in the near future when you’ll be able to hail a flying Uber. The ride-hailing company didn’t entice us with a sample video, like Kitty Hawk did, but it did vow to offer a prototype of a flying Uber by 2020, for display at the Dubai World Expo. As if our streets didn’t have enough issues with crashing human-driving cars and self-driving experiments, now it’s onto the skies? Oh boy.

—Speaking of the air above us, imagine that you’re flying a drone, but your eyes are totally covered with a virtual-reality-like headset, and you’re so lost in the journey, that you have absolutely no idea where the drone is. That’s one potential issue with the new DJI Goggles, a $449 headset that lets you fly the drone and enjoy the flight with a “bird’s eye view” in 1280×1440 resolution. 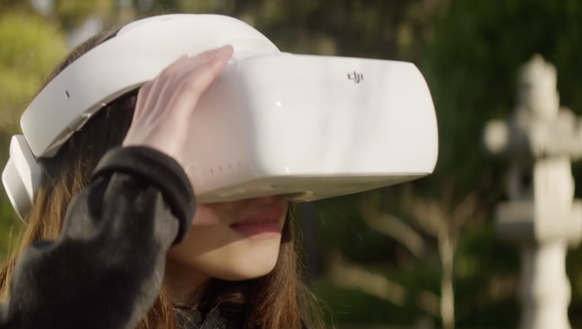 But what about that pesky rule from the Federal Aviation Administration, that when flying a drone, you have to have it in your line of sight? DJI says the Goggles have a flip screen to open for a quick monitor to keep track of the drone. Better yet, “have a spotter,” by your side, says DJI spokesman Adam Lisberg. The Goggles will be readily available in late May.

Amazon’s Echo Look is a camera in the closet. (Photo: Amazon)

Finally, who’s ready to put a camera that’s connected to the Internet in the closet? The Echo personal assistant from Amazon is expanding with a new unit that does more than just read the weather, news updates and play music. A new $199 edition, the Echo Look, has a built-in camera, designed to help you find the right clothes for you.

The Look, available by invitation only on Amazon’s website, can do all the things Echo speakers normally do, but also is positioned to take photos of you as you try on different outfits, rating which one suits you, and suggesting what clothes might be right.

It makes sense if you think about Amazon’s endless quest to make it easier for you to buy things; the biggest drawback to buying clothes online is that you can’t try them on. But the device immediately gave some the privacy creeps:  Amazon already knows gads about your tastes and habits. Now it will also have lots of pictures of you. The device does have an off button.

Meanwhile, back to that flying water contraption for a minute. The electric vehicle appears to have room for one driver—no passengers yet—and Kitty Hawk says you won’t need a flight license to operate it. The company claims it will be available by the end of 2017.

Let’s close off with a show of hands. Who out there actually believes we’ll see this flying boat this year, as the company claims, or an airborne Uber car in less than three years?

Of the four announcements, I’m guessing we’ll actually see two of them within the time frame the companies suggest—the Amazon Echo Look and the DJI Goggles.

Agree, disagree? Let’s talk about it on Twitter, where I’m @jeffersongraham.